2014: Illinois, Missouri, and the Smokies

2014: Illinois, Missouri, and the Smokies

Going into 2014, I didn't really expect to get out in the field very much as it was a very busy year for my family and the last year of me being without a drivers license. That being said, I still had a lot of fun seeing some new herps and meeting new people. I wasn't able to get out in the field as much as I wanted, but when I did I think I had some pretty good luck.

My year started on February 14, when I found a lone Blue Racer out sunning himself in a field on a 55 degree day. He was in pretty poor condition, probably dying from some sort of flesh rot.

It was a while before any warm weather came, but eventually I was able to find some garter snakes in the small treeline behind my house in early March

In late March I visited a small wetland area near my house which is always booming with peepers. 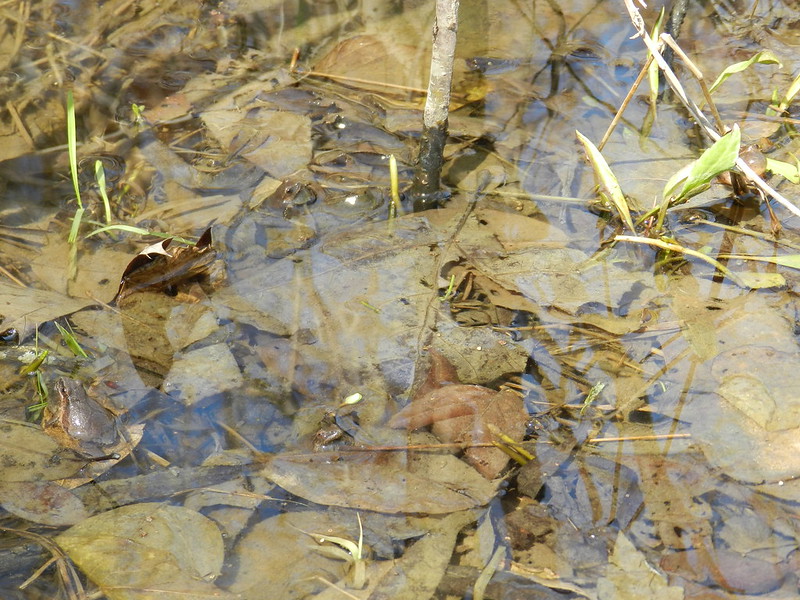 In late March some of the bigger snakes started coming out. This guy was found under tin alongside with a big Black Rat snake which I didn't photograph for some reason. Earlier that day I had seen another Black Rat as well as a pair of Prairie Kings mating at this spot.

Brown Snakes can also be found under tin early on.

In early April the warm rains came, and so did the usual amphibians. For some reason I struck out on ringed salamanders for the second year in a row, but I had fun watching a small population of Illinois Chorus Frogs.

In comparison with the Western Chorus Frog. 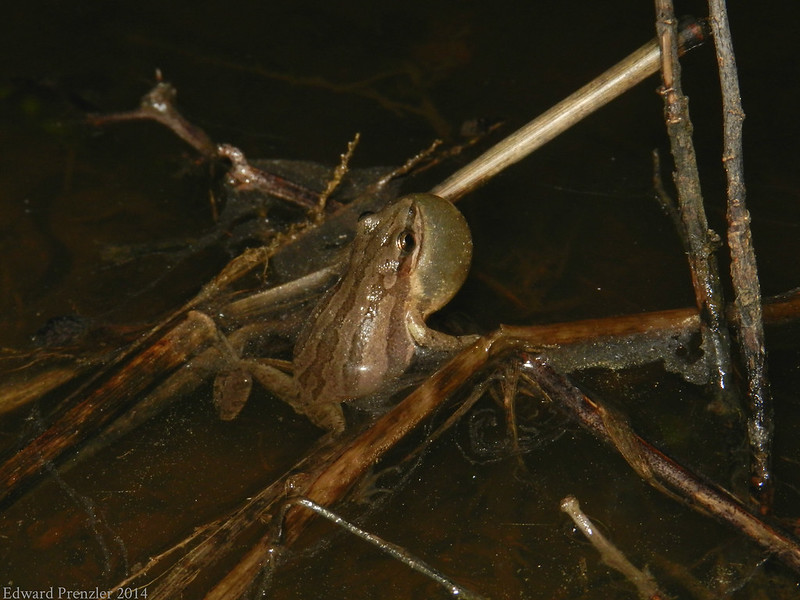 Fowlers Toads and Gray Treefrogs take the stage after these guys at this spot later in April in huge numbers.

Fast-forward to May when most of the "big snakes" start breeding. In early May I visited an area in hopes of a Graham's Crayfish snake. Unfortunately, the only regina seen slipped away. I did see several rhombifer, Yellowbellies, and dozens of Northern Water Snakes. Here is the biggest Yellowbelly seen that day, a monster three foot gravid female.

I decided that it was time for me to hit up some glades. I got some directions from a friend to a glade that had Coachwhips and Collared Lizards. Unfortunately, I wasn't able to get to the glades as early as I would have liked, so the only notable find was this Speckled Kingsnake, which was still exciting for me because I had only seen a handful before that. 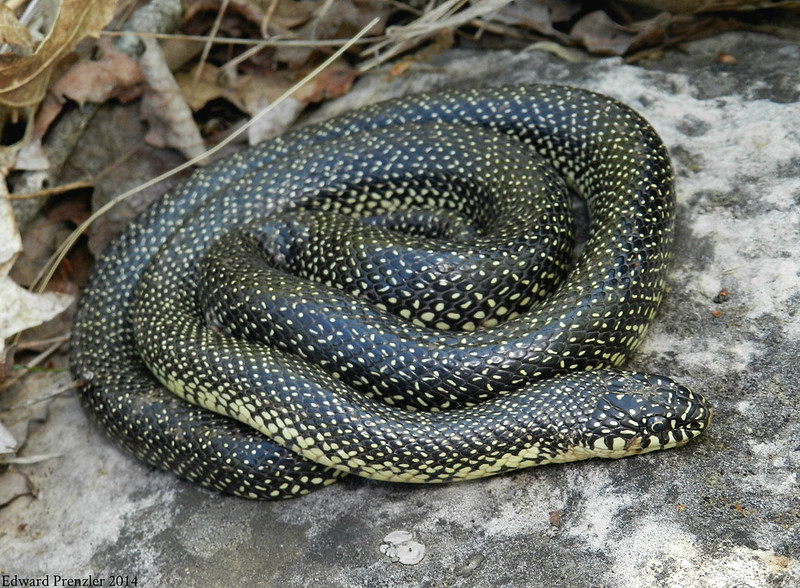 The next week I took a trip with Peter and Ryan to one of Ryan's spots to look for Red Milk Snakes and Pygmy Rattlesnakes. The habitat explored was small igneous glade on rocky hillsides. On arriving, it didn't take long to me to find the first snake of the day, which happened to be a lifer for me.

These guys are usually really common there, but we only saw three all day long. Right after that, I flipped a small Speck under a rock. In-situ:

Not long later, Peter flipped another small Kingsnake of his own.

So far these glades looked to be awesome, it wasn't even noon yet and we had already had pretty good luck. It was a while before we found anything else, but eventually Ryan flipped the first Milk of the day.

This was my third one ever, so I was pretty stoked. Not long after, as I we were trudging up the trail, I nearly stepped on this big Rough Green Snake stretched out crossing the trail.

Soon after that, Ryan called out that he had flipped a Milk and a Speckled King under the same rock!

As the afternoon carried on, we continued to have great success on these rocky hillsides. 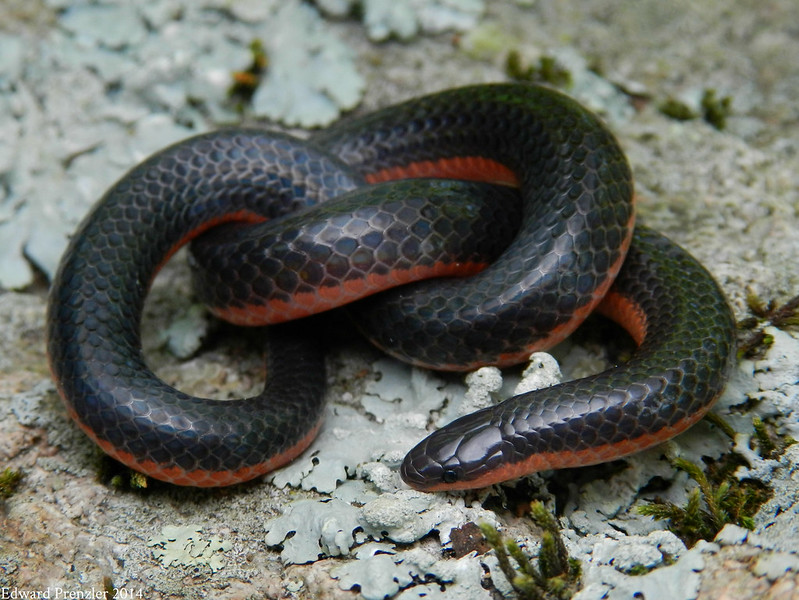 The biggest kingsnake of the day, flipped by Ryan. 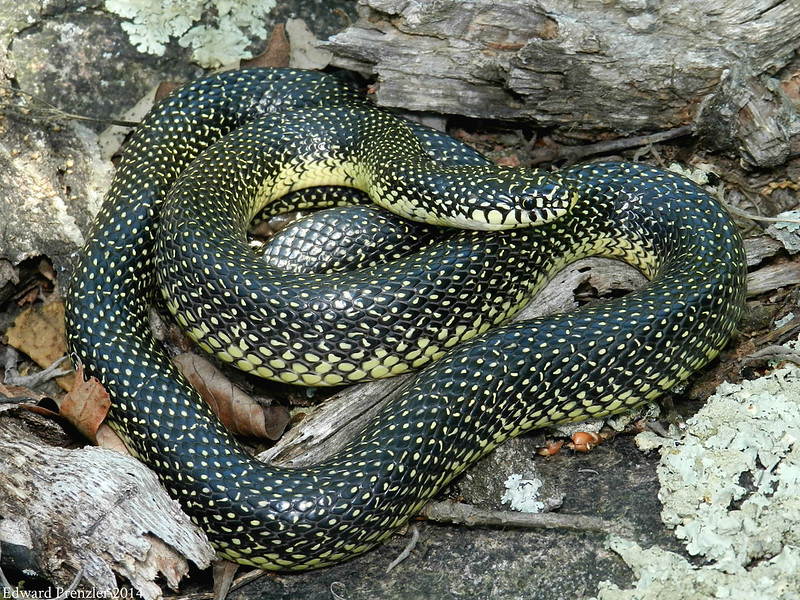 We ended the afternoon with two more Red Milks (both flipped by Ryan) and another Speckled King found on the crawl. Unfortunately, my camera battery was getting low and I wanted to save it for something we hadn't seen yet. On the way back home, we stopped by an area that has a population of Eastern Collared Lizards. We looked around for a while, not seeing anything. Eventually Peter spotted this guy catching some evening rays. In-situ:

After a mad frantic scramble, I was able to grab it for some closer pictures.

Very cool lizard, I look forward to seeing more in the future.

This was probably the highlight trip of the year for me, we ended the day with 5 Red Milk Snakes, 6 Speckled Kingsnakes, a couple Wormsnake, Flatheads, a Rough Green and the other common glade denizens.

After I got off school, I had more time on my hands for a little local herping. Thankfully, I had a fairly good tin spot that I made the previous year which has produced a number of Rat Snakes and Prairie Kings, as well as Racers and Brown Snakes. Later in the summer someone took all my tin, but I figured that would happen eventually. In this one small field, I found 8 different Prairie Kingsnakes. Sometimes I found the same snake several times under different pieces of tin. They are probably my favorite snake here in Illinois. Here are the nicest ones I've seen throughout the year. 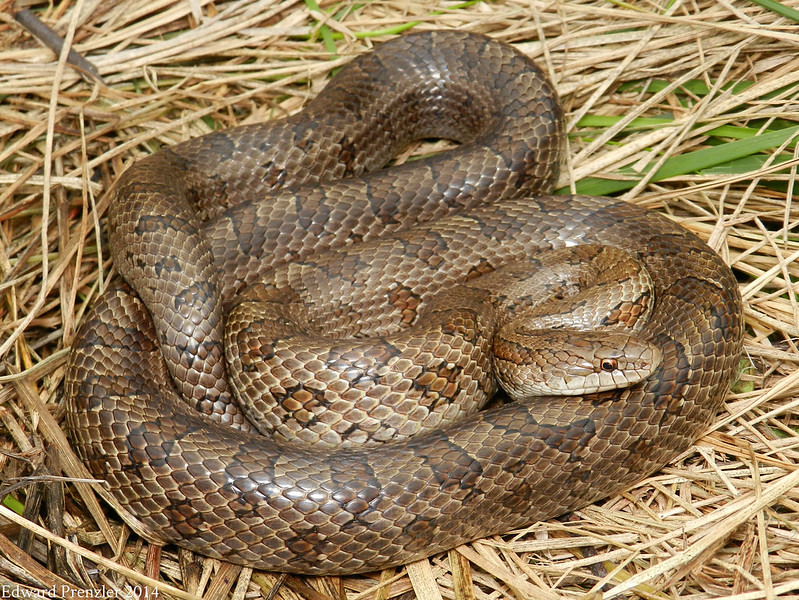 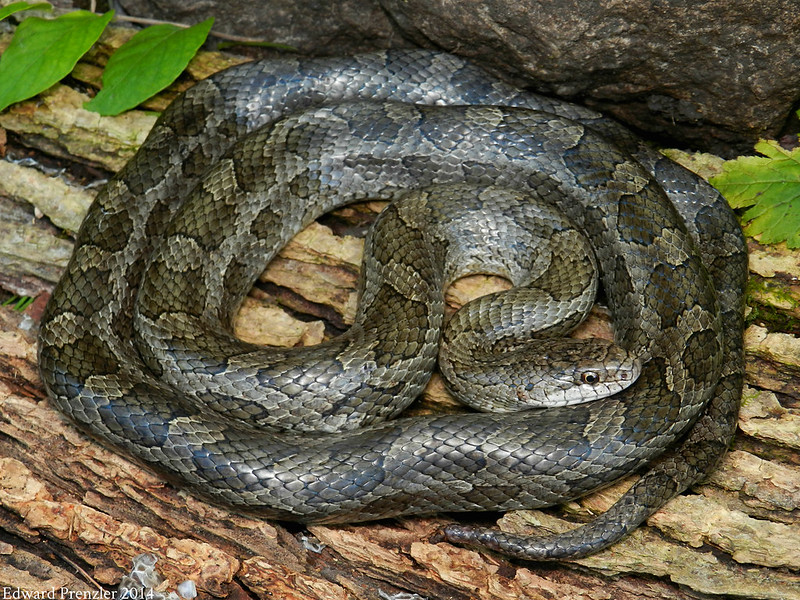 In July, I went to visit some caves with my family in Eastern Missouri. I was hoping to see a grotto salamander in the cave, but none were seen. After that, I wanted to check out a small glade that I found that was in the park. On the way there, a nearby lake was home to about two dozen of these stinkpots.

Unfortunately I wasn't able to find the trail to it, thanks to a poor trail map. Walking back to the car, disappointed, I noticed out of the corner of my eye this brilliant Speckled Kingsnake stretched out in the grass.

This was as perfect a kingsnake as they come; vibrantly patterned with no signs of an scars at all.

Here are some of my best photographs of a few other common species found throughout the summer. 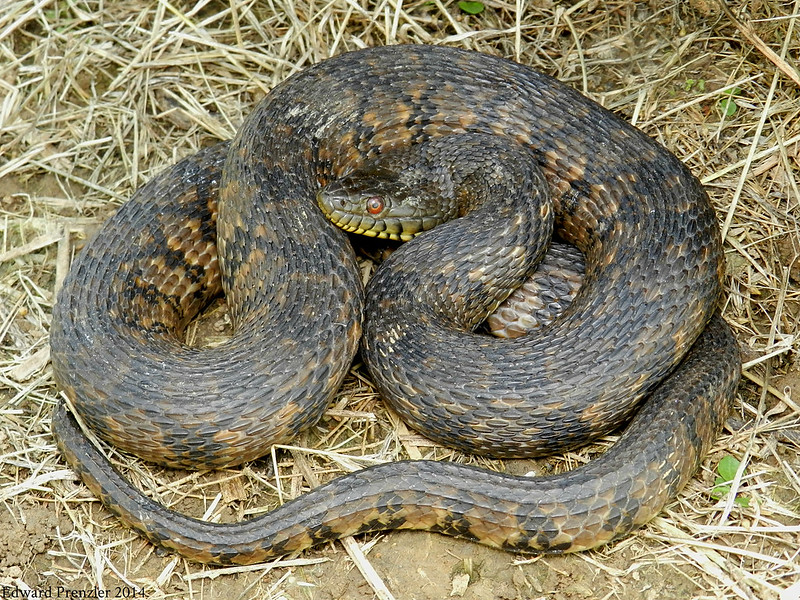 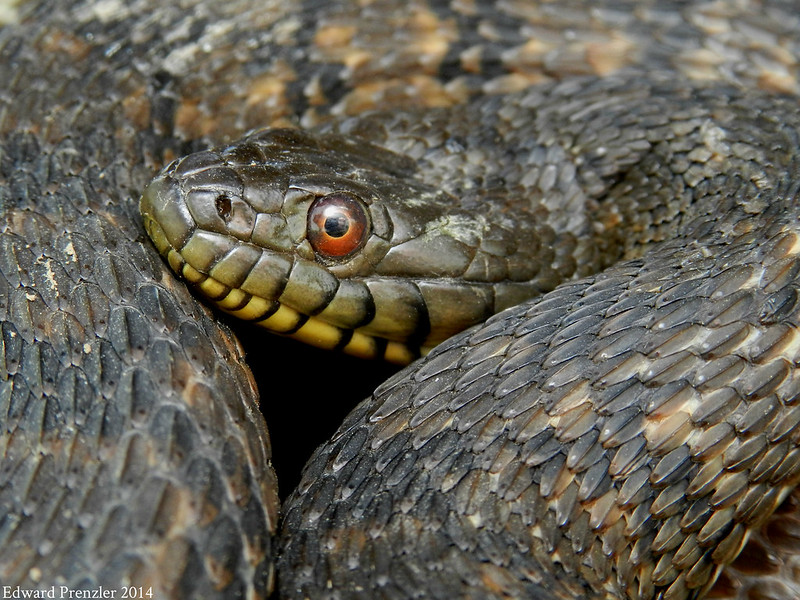 This was the first softshell that I've ever caught. She had just finished laying eggs.
Eastern Spiny Softshell (Alpalone spinifera) 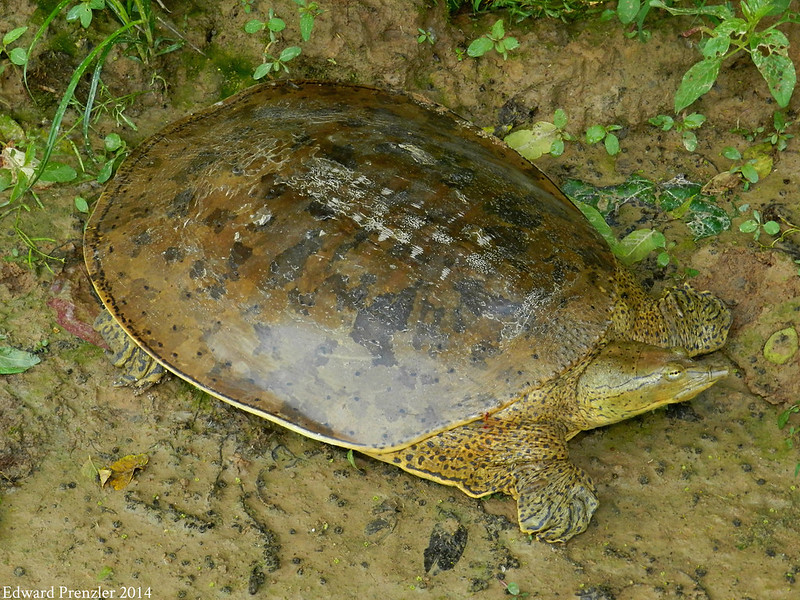 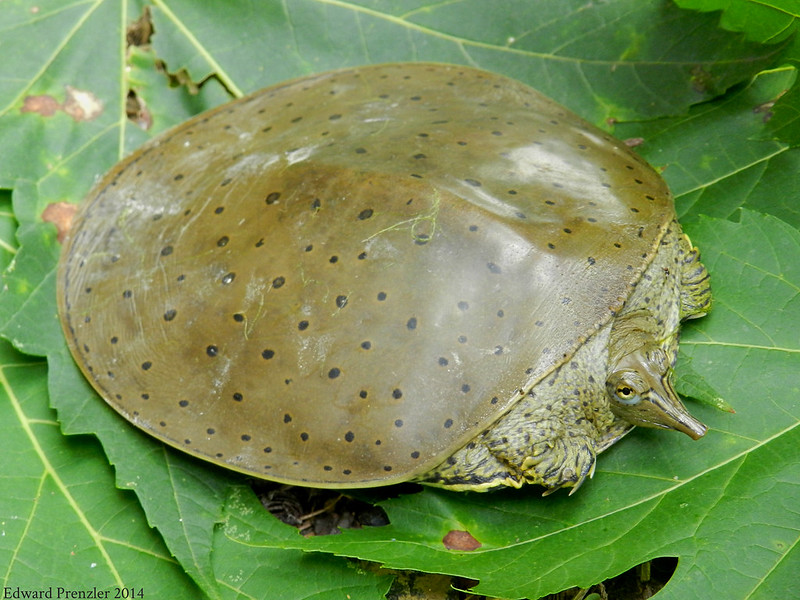 This was a strange find. A Three-toed Box Turtle from Illinois. This is the second time I have seen this guy.

Bullfrogs can always be found when nothing else can.

I took two camping trips to Missouri for kayaking over the summer which is always a blast. Dozens of map turtles and northern watersnakes showed up, and even my first Ozark cottonmouth. Unfortunately I couldn't take my camera on the river so no pictures. Right before school started I took a trip down to Shawnee NF for a little one day hiking trip with my friend Noah. Unfortunately the high was 90 degrees, but it was still fun exploring. We checked out an area that he had seen a timber at before, but the closest we got was a timber shed. Scenery:

When school started again, I got pretty busy with an internship. However, I was able to make it over to Missouri one day in early September with Peter to look for Timber Rattlesnakes. It was cool and rainy, but as we were walking up our first hillside Peter spotted this beauty under a rock ledge waiting for the sun to come out. As found:

The snake was gracious enough to come out and let us get a closer look. 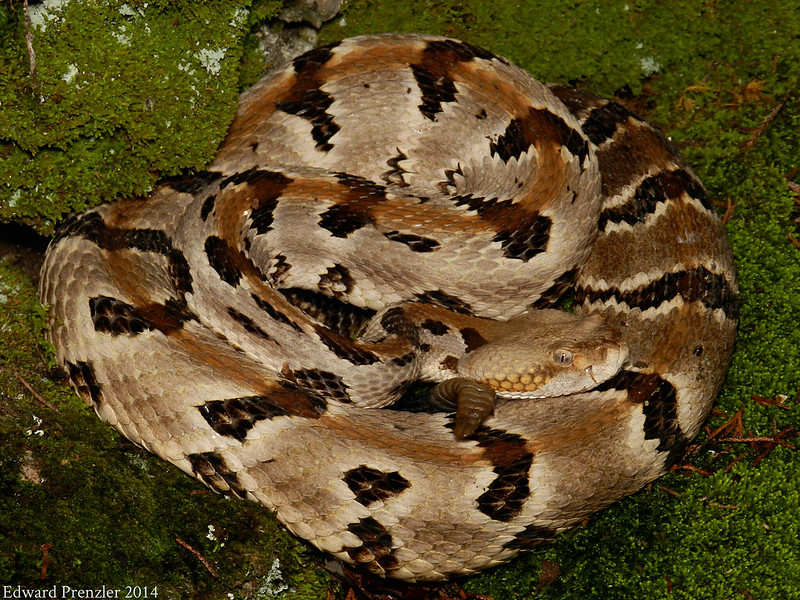 I was pretty excited because I this was only my second ever timber rattlesnake. A while later Peter shined a little copperhead in a rock crevice, which was actually a lifer for me. 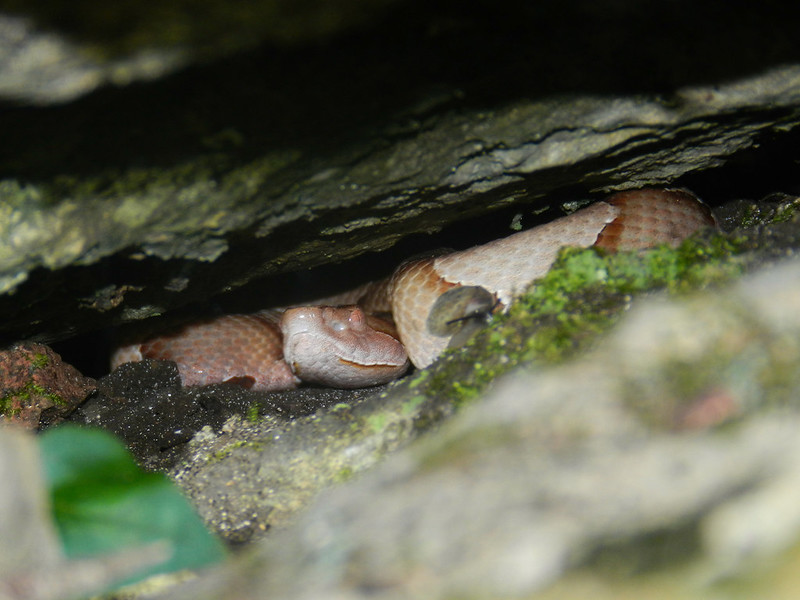 A few weeks later I returned, but unfortunately the low temps the night before halted reptile activity. I was able to flip a couple of these guys.

October was really busy for my dad and I, so unfortunately I missed the Snake Road migration. After my internship ended in early November, I decided to tag along with my dad on a road trip to Charleston, SC. The weather couldn't have been worse, with a day high of 40 in Charleston. On the way there, I stopped in the Smoky Mountains to see if I could turn up any salamanders. We got there late one foggy afternoon as it started to sleet. I pulled over on a mountain road to check out this small stream. By this point the high was dropping below freezing.

I was able to flip two D. imitator under a submerged rock, as well as a D. quadramaculatus and a D. ocoee that got away.

Another nearby creek turned up lots of D. monticola.

The next day was spent with some friends in Charleston. It was too cold for any reptiles, but I did find this guy in a bush.

On the way back I stopped again through the Smokies to try again for some more species. High elevation streams weren't productive, so I ended up working the same areas I had originally visited earlier.

I thought my herping season was done after this, but the next weekend was spent camping with Noah in Shawnee NF. The day high was 43, but I managed to turn up a single Ambystoma species, a lifer for me as well.

Many eggs were found as well. Recently I started exploring a nearby area that a friend told me about that has smallmouth salamanders. I was excited to roll a male and a female under a log one November day. The female:

I came back again in mid-December and found several more.

I usually have to travel at least an hour to see any salamander, so now finding this spot near home was exciting.

Numbers wise, 2014 wasn't really my banner year so far, but I look forward to topping it in 2015 now that I have a new camera. Thanks for looking!

Were those collareds in IL?
Top

Great photos all round but that stinkpot shot is outstanding.
Top

Great stuff Edward! I think my favorite shots are your prairie kingsnakes. Those look great! I'm looking forward to next year!
Top

I also have to go with the PKs as my favorites.

Thanks guys, nothing beats a handsome calligaster!
Top

Excellent stuff, Edward. Glad to see someone else appreciating the majesty of calligaster as much as I do! I love the variety you have in that field. I hope to see some Illinois callies one day.
Top

Nice stuff, I love those stinkpots perched on top of this emergent sticks.
Top

Edward - What a phenomenal post with such beautifully captured images. That first Yellowbelly Water is such a perfect capture. Prairie king shots really show a good diversity of patterns and contrast. Easily my favorite pic though is the shot of the side-by-side Broadhead skink twosome. Thanks for posting.

Wow, this was an awesome post. Thanks for sharing all this good stuff.
Top

NACairns wrote:Great photos all round but that stinkpot shot is outstanding.

Couldn't agree more. I really liked those scenery shots in the Smokies as well. nicely done!