I am thinking of a trip/pilgrimage to visit Grandfather Mountain in North Carolina and see where Worth Hamilton Weller (http://en.wikipedia.org/wiki/Worth_Hamilton_Weller) fell while collecting his namesake salamanders. Does anyone know where exactly this was?

Thanks, and Happy Herping,
Billy
Top

Maybe google it for a start. Here are some of my google hits I just found:

Try google maps too. It works for me with pinpoint accuracy. That's how I find least known historic sites such as family cemeteries.
Top

If you fall to your death, you probably found the same spot.

In Adler's "Contributions to the History of Herpetology Volume 2" it is stated that "...Weller's body was found lodged among boulders of rain-swollen Stonestack Creek." Supposedly, this would be at an elevation high enough to have Plethodon welleri, which were in a sack with his body.

It sounds like Billy's wanting to visit Weller's landing site and adorn it with a decoration or two like a normal pilgrim.

I'd do the same.
Top

Just FYI, you will need a SciCol permit if you plan to collect P. welleri
Top

Dery is closest to the mark re my intentions (and thank you for the introduction to 'Google,' though I haven't found the specific slope of Grandfather Mountain through Google). I thought it would be especially neat, in a morbid way, to see a place where a guy like me (albeit much younger) died while trying to learn more about a puny little animal most people wouldn't even bother shrugging at, and it happened RIGHT HERE. I will not venture out there in a storm, and I plan to rely on my usual sense of warning when it comes to where I shouldn't trust my weight, but I've always wanted to check it out, and I might be passing not too far from there on my way to another herping destination.

Thanks Jeff, Adler's note about Stonestack Creek is a big help, though Dery's 'Google' program isn't coming up with it. I did find reference to Stack Rock Creek, which seems too much of a coincidence, so I'm basing my search around that.

Frogfish - thanks for the tip. I plan to collect nothing, but I'd be looking to flip rocks and take a photo of a salamander or two. Do the local LE there interpret that sort of activity as collecting?

Anyhow, if anyone who knows the area would be able to offer directions, I'd love to visit the spot and pay my respects.

Working off the quote from Adler, and assuming 'Rock Stack Creek' is the one we're looking for, then I think the location of the creek on this map http://www.grandfather.com/wp-content/u ... il-map.pdf just about nails it for me. Thanks everyone for posting.

That's great that you most likely found the spot. It will be a very satisfying treat if you can find the salamanders there -- if you do, please share a photo!

It will be a very satisfying treat if you can find the salamanders there -- if you do, please share a photo!

I doubt they're still there where they fell, they were either preserved and put in archives, released, or their corpses rotted away.
I'm guessing there is a chance Billy will find plethodon welleri. Just not W.H. Weller's samples.
Top

ribbit wrote:It will be a very satisfying treat if you can find the salamanders there -- if you do, please share a photo!

I doubt they're still there where they fell, they were either preserved and put in archives, released, or their corpses rotted away.
I'm guessing there is a chance Billy will find plethodon welleri. Just not W.H. Weller's samples.

Maybe they have mutated into giant man-eating salamander monsters. One never knows.

I am prepared for most common herping hazards, though I'm not sure about the mutant man-eating salamanders.

Now that you mention it, I'm curious where the salamanders in his satchel ended up. I'm also trying to track down the contemporary reporting, so that might give a clue. How cool would it be to see the preserved specimens themselves?
Top

I guess I'll need to stock up on garlic, silvertip arrows and crossbows when I end up visiting Grandfather Mountain.
Top

Or perhaps they got jobs at Google?

Good luck, Billy. These are the kinds of obscure herp trips I love.
Top

I have a copy of the original "Proceedings of the Junior Society of Natural History" in which Plethodon welleri was formally described by Charles Walker (dated July 31, 1931). It also contains a brief Memorium about Weller that provides no additional information from what has has been presented on this post.

Walker states that Weller was searching "near the summit." The four specimens found with his body did make it into the Cincinnati Society of Natural History Collection, and Walker describes them along with the three specimens that Weller and Dury collected in 1930. The latter three formed the holotype and paratype series, and are now in the USNM collection at the Smithsonian. The four that were found with Weller's body are included within a series "CSNH 1087-1092." I do not know whether the CSNH still exists, or if the specimens are still in the Cincinnati Museum.

I haven't seen anyone post a particular bit of advice about herping in the Blue Ridge, so in the interests of avoiding Wellerismo I'll mention it. The granite outcrops up there tend to be nicely rounded, and there is just enough loose material in the form of little rounded grains and a film of water to begin a slide even on a quite shallow slope. This can end poorly. Even worse (and what I suspect happened to Weller) is to get into a rhododendron hell, a three-dimensional maze that goes downslope and seems to be really safe because you are embedded in branches. However, these clumps hang off cliff faces and are attached sometimes hundreds of feet above, and the part you're in can very easily break off well before you see that things are precarious. Everyone wants to hike around on the granite domes because they are nice and open, but watch out for the edges! And don't trust the rhododendrons.
Top

Sam Sweet wrote:... a rhododendron hell, a three-dimensional maze that goes downslope and seems to be really safe because you are embedded in branches. However, these clumps hang off cliff faces and are attached sometimes hundreds of feet above, and the part you're in can very easily break off well before you see that things are precarious..

That's a great term (I learned something today - thanks!) and a great post.

Years ago I went on a hike up up a mountain in western NC and I definitely recall the slippery granite outcrop hiking. I'm used to rock with better traction in the Ridge and Valley Province and Poconos in PA, and the NC experience did spook me a little. I tend to think of rhododendron hell as simply getting stuck while hacking from point A to point B. It's very helpful to know it can get much worse.
Top

I hadn't really heard Weller's story before. He was very young with a promising future in herpetology. One of Bill Brown's students died from a fall during timber rattlesnake surveys in New York. Its a sobering reminder to be careful out there. The cliffs in the west might be higher but the footing is much more secure.

Jeff do you have the full citation to the Walker paper describing P. welleri? I'd like to read it. Thanks.
Top

do you have the full citation to the Walker paper describing P. welleri?

I scanned a copy today for BS Brown, and can send the same via personal e-mail to PM.

So, I went to Grandfather Mountain. I camped on the Blue Ridge Parkway and first thing in the morning I went to the mountain.

Turns out the mountain (part of which is a state park, the other part of which, which I was visiting, is held by a nonprofit org) didn't open till 9.

So I killed time flipping one of these handsome salamanders (Plethodon yonahlossee): 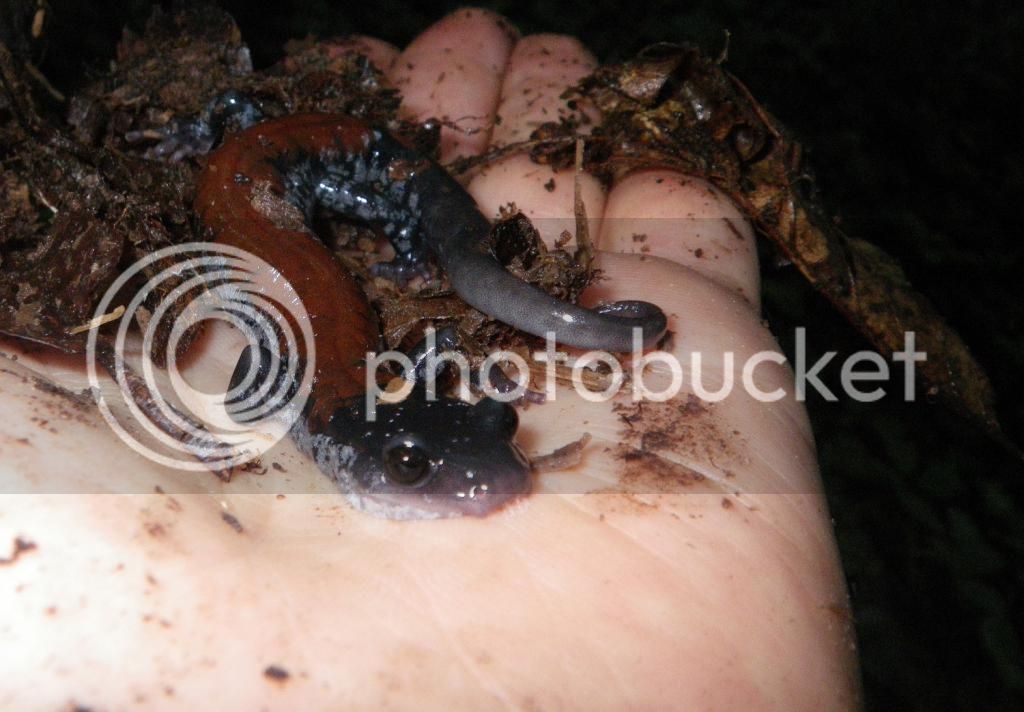 I also hiked across the creek about halfway up the mountain:

Here is the top of the mountain above the creek, presumably where Weller would have been before his fall:

Here is a trail through the spruce/fir forest near the top:

And of course salamanders! Here is a Plethodon welleri, perhaps a descendant of the salamanders Weller collected in 1930 and 1931:

Here is a mystery Desmognathus, from next to a tiny stream near the summit (I failed to check the belly color. Does that tail look partially keeled to you or round?):

I also stopped by the collection of the Cincinnati Natural History Museum to see specimens collected by Weller and Dury.

And, while I'm posting, here is a Ouachita map turtle (Graptemys ouachitensis) from eastern TN:

I also stopped near Pittsburgh on the way home, and next to a cemetery (thank you Jason Poston) we flipped a ravine salamander (Plethodon electromorphus - note the light speckling of the belly):

You did it! You kind of buried the lede there, but full credit for finding your target salamander at your target location. Congratulations!

Thank you. I'll say that seeing the specimens at the museum was really cool too - connection with someone else doing the same thing 85 years ago.
Top

Awesome. I'll be making my pilgrimage using a kin from the area as a guide asap. Hope you won't mind me digging up this post then.
Top

This whole thing was fun. Thanks for putting it together.
Top

...a Plethodon welleri, perhaps a descendant of the salamanders Weller collected in 1930 and 1931

This is such a neat idea. Fun to think about.
Looks like a really wonderful trip. I dig the yohnalassee sally and the oachita map turtle. Such beautiful animals.
Top
Post Reply
25 posts • Page 1 of 1