I am quite a few reports behind by now, in part, perhaps, because I've been busy, but mostly, I guess, because finds the last last year and a bit have been overall a bit less than stellar and it's always more fun to write when there's something to brag about, plus the general trend away from this and other forums towards Faceboook is a bit demotivating

Entering the off season it's high time to do something about it, so here is – finally - the first short installment of what will hopefully end up a catch up series, beginning in reverse order...

In the first full week of November I went on a business trip to Boston. Determined to make the most of the opportunity I arrived a day early to sneak in at least a taste of herping. Realizing, of course, it was very late in the season I knew it wouldn't be easy so I had contacted Mark Lotterhand for a few tips. He graciously offered to join me for a day in the field, an offer I couldn't refuse.

After a week or two of miserable weather with occasional frost and even a bit of snow Mark felt sure the ophidian season was over so we had agreed on other targets. Then, the night before, forecasters predicting a sunny day, he wrote me and suggested we give it a go after all. Hence, we started the day at a den near his house. After a 40 minute delay on the commuter rail out of Boston due to falling leaves from the storm Saturday I was met at the station by Mark and his two kids and we hurried to a powerline cut through the woods where a steep slope on the edge of a beaver pond should house some of the hardiest local snake species. It was a beautiful day, the famed colours of New England fall though probably even more vibrant a week or two before still quite stunning, but it was on the cool side, temperatures peaking a little later around 50 F / 10 C. As such, it was great to be out but our hopes were modest – perhaps 1 or 2 northern water snakes before heading on... 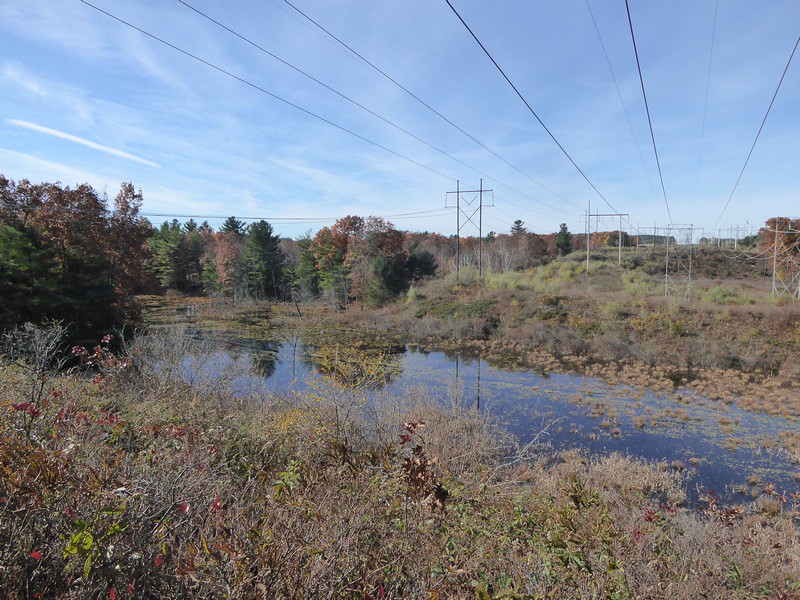 We did a tad better. Mark found the first basking water snake straight off the bat, then came a fleeing eastern garter snake, then another, followed by a one eyed water snake, a water snake brace of two different sizes and finally a couple of basking garters, all within a few minutes. Mark's friend Mike soon showed up, reporting a bald eagle flying by overhead at the parking lot. 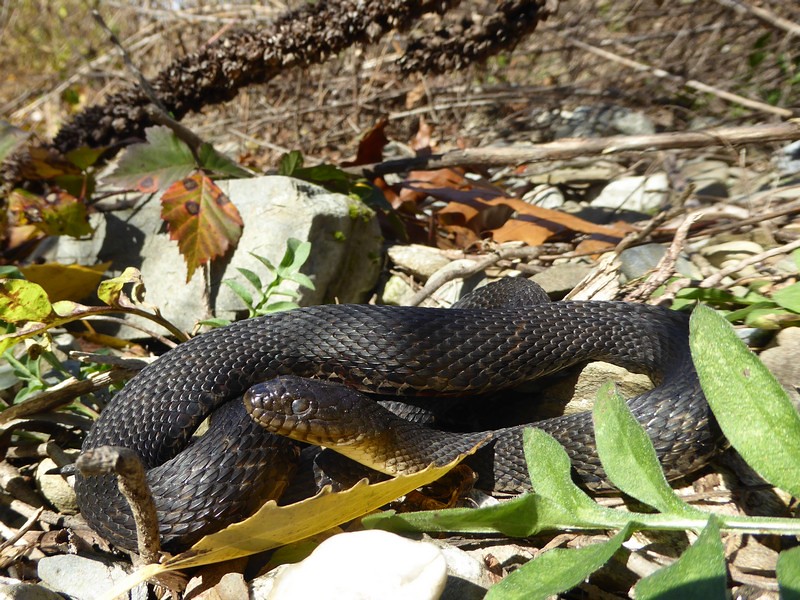 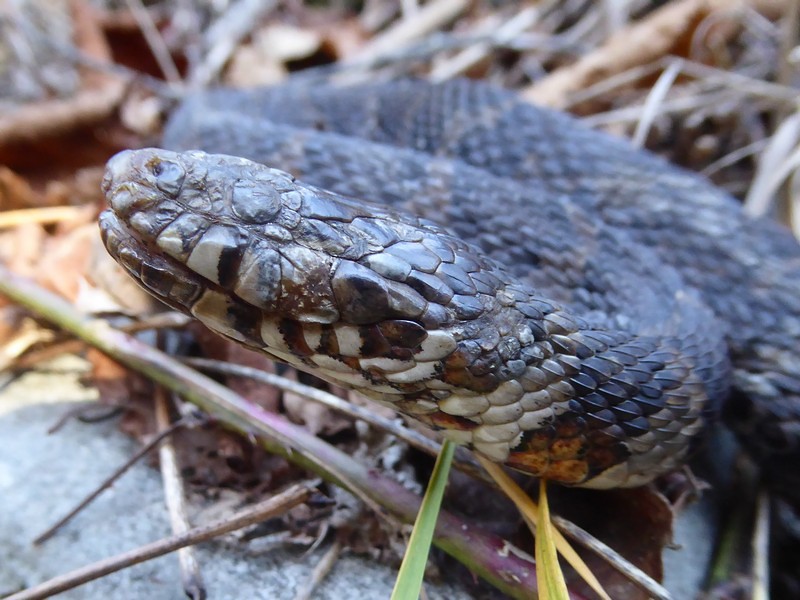 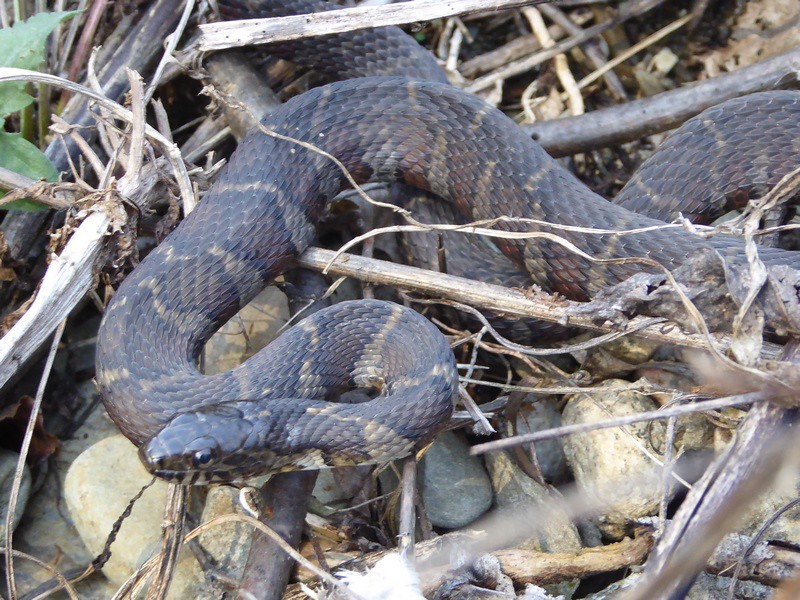 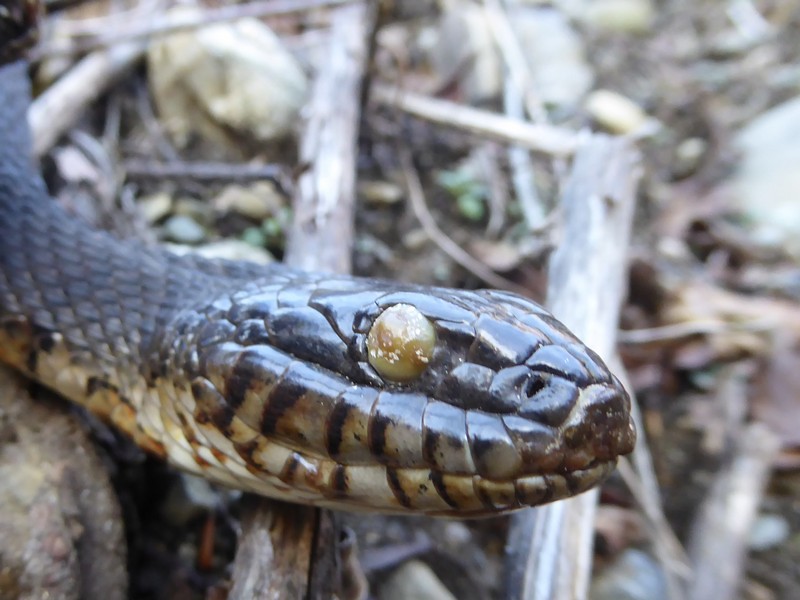 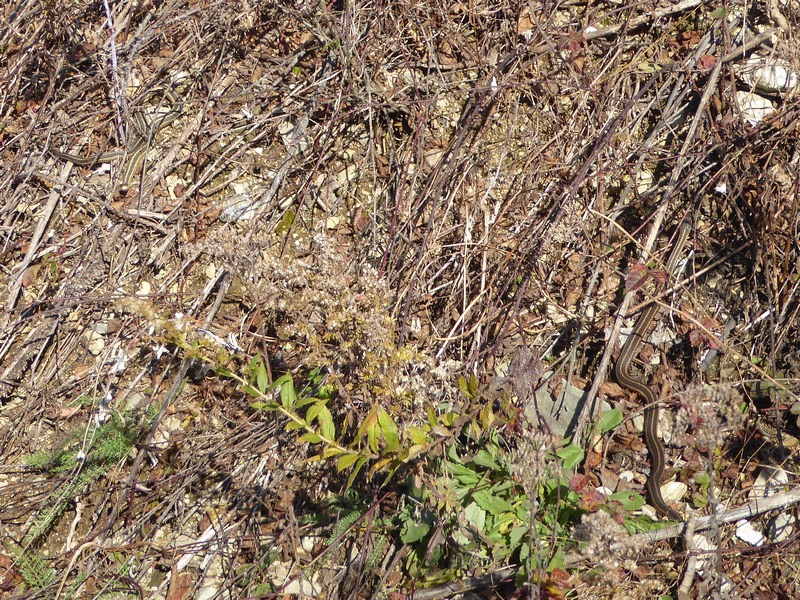 Continuing our search, alongside field voles and deer mice we soon found the first eastern ribbon snake, a few more garters and another ribbon snake. By the time we headed for the car we were up to 8 garters, 2 ribbons and 4 water snakes, not bad for the temperature and time of year. On the way back we encountered a cottontail and I flipped a redback salamander. 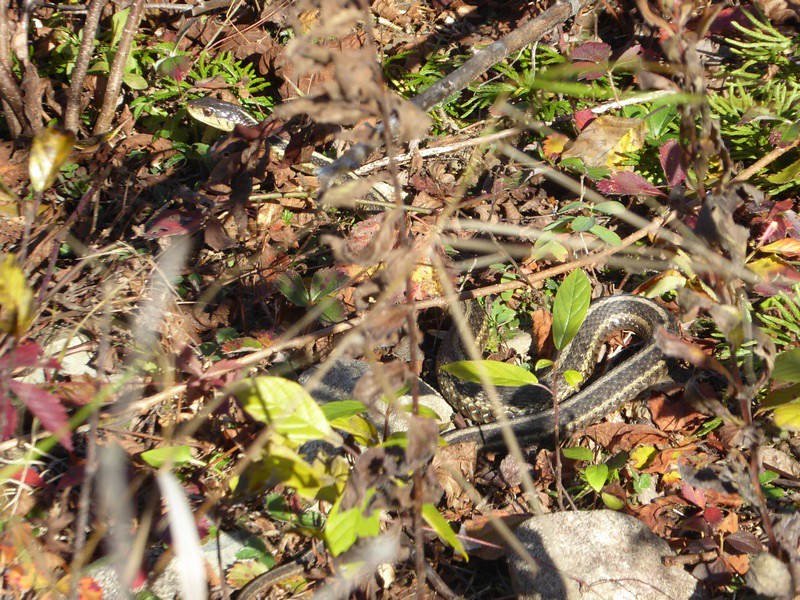 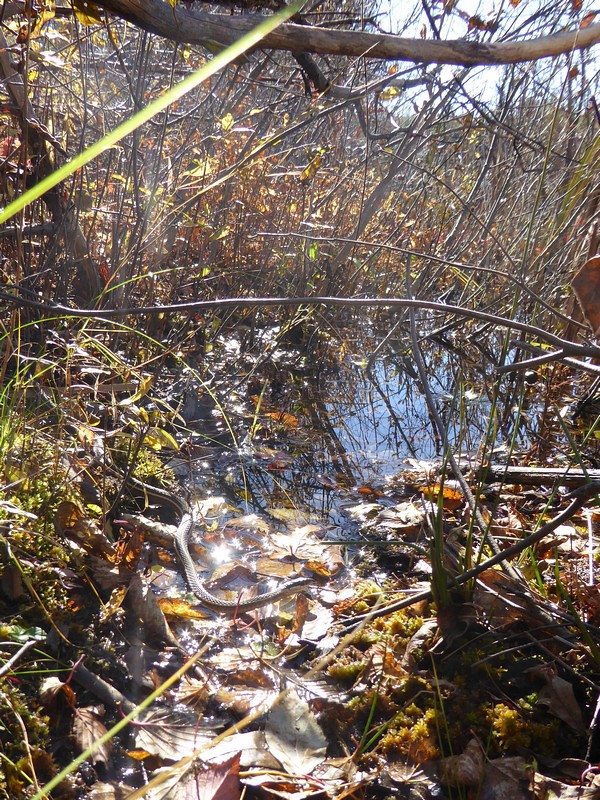 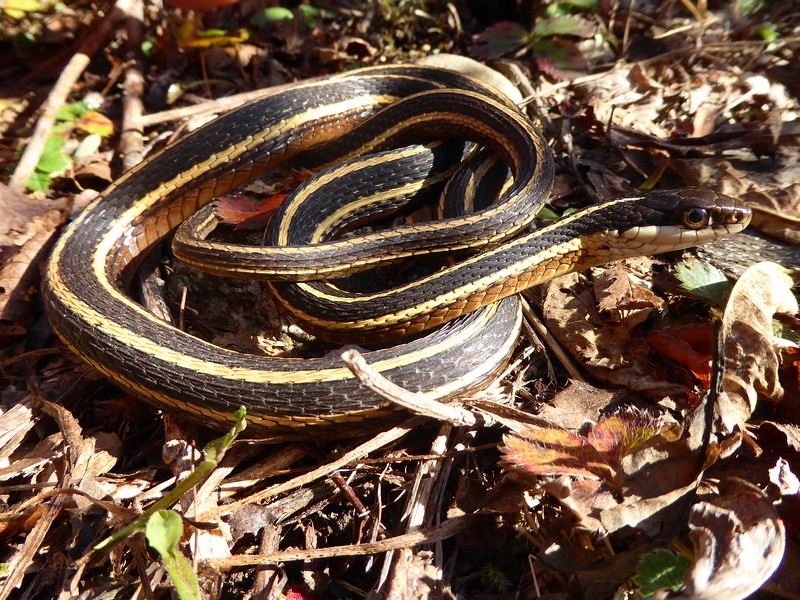 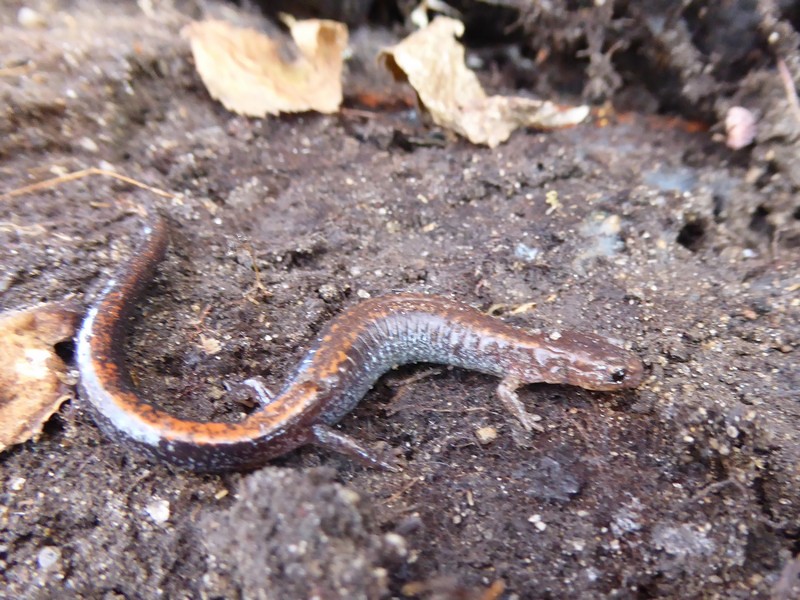 Next up we dropped off the kids at Mark's house and headed to the river for our main target. In normal conditions we might have seen some on the bottom but after the recent rains the usually shallow, clear and slow moving river had transformed into a deep, murky torrent so our only hope was to find one on the bank. We had all but passed out of the woods when just as we were about to exit suitable habitat there it was – a beautiful adult female wood turtle basking in the pine needles. 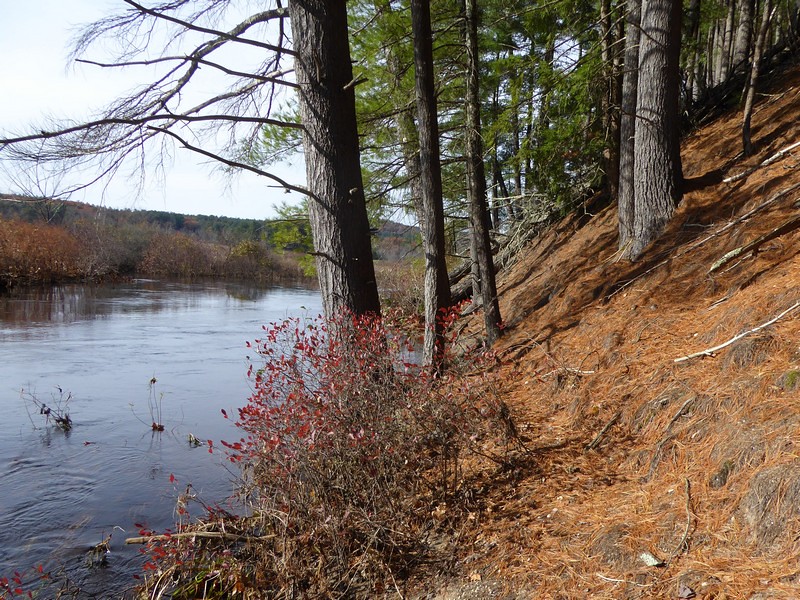 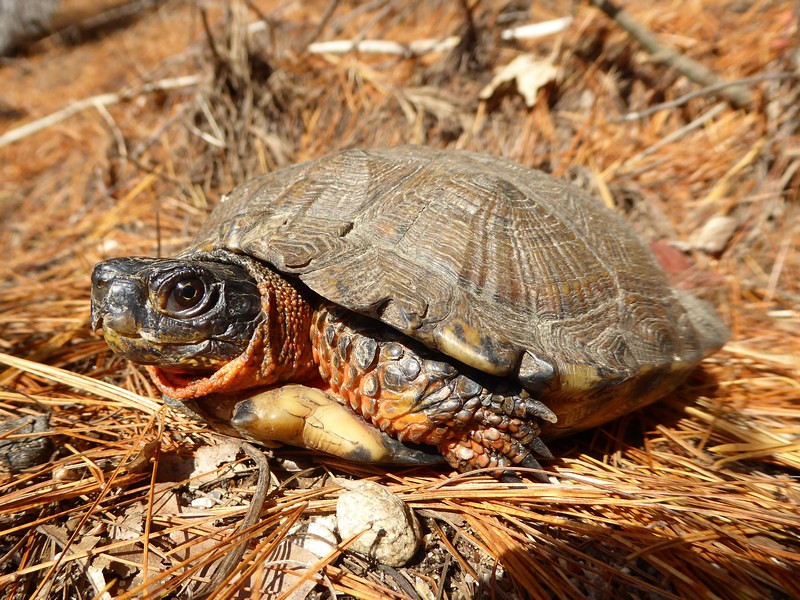 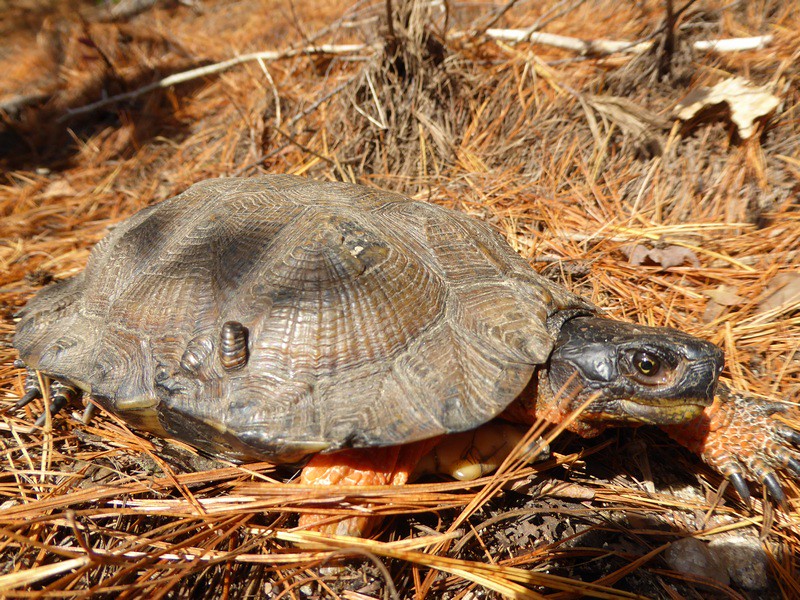 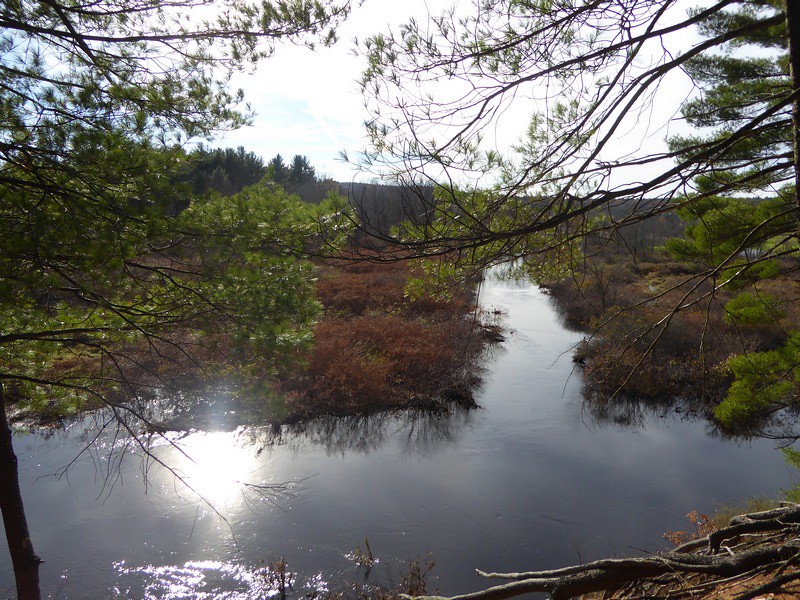 After a few pictures we walked back to the car, enjoying the flocks of bluebirds and goldfinches along the way. We drove on to our final stop of the day a little further upstream where the river meandered through the woods, surrounded by dunes, vernal pools and cranberry bogs. It was a lovely spot but we didn't find much. Red and gray squirrels scurried about, I flipped a couple of redbacks, and we caught a quick glimpse of a couple of probable green frogs jumping into the water. 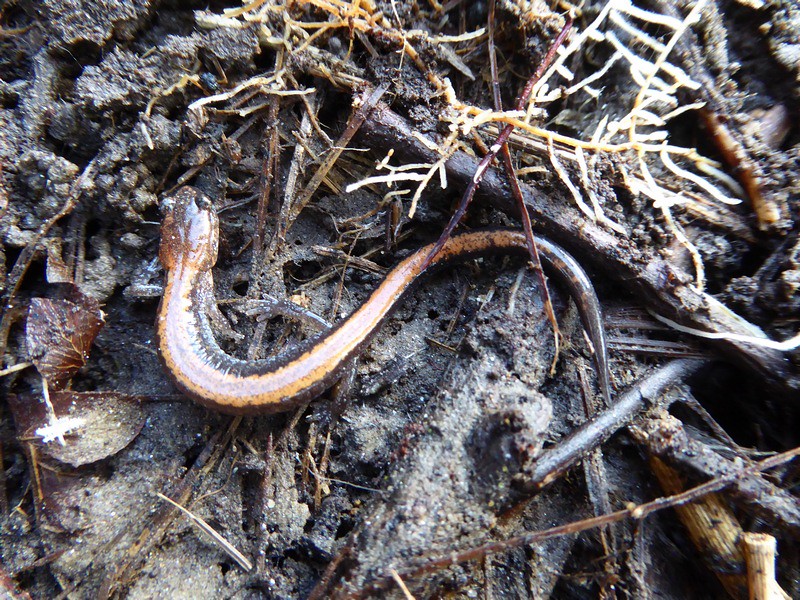 By now the sun was quite low on the horizon and it was getting cold, so we made our way back to Mark's house. As we were enjoying a beer in the kitchen, talking about reptiles, politics and everything in between, a bobcat suddenly appeared in the backyard, just next to the porch, a fitting end to a thoroughly enjoyable day in the woods.
Top

The scarring on that water snake suggests snake fungal disease. Do you know if its in the area?
Top

I was wondering about whether that might be the cause. As a European I have not prevously encountered Ophidiomyces so I do not recognize it. I know it is found elsewhere in Massachusetts as well as near this location in New Hampshire. Whether it has been recorded from this particular area I don't know.
Top

Good to hear from you again Kris, congrats on the successful social outing!

What luck on the woodie, eh? Great find.

Also, I was wondering about your level of awareness of / precautions for avoiding Lyme disease, a tick-borne illness. If you aren't up to speed and vigilant, look into it. It's really, really nasty. And rampant in New England.

I look forward to your continued catching-up this fall & winter. Snow on the ground here - blech.

Thanks for the reply, Jimi

The wood turtle was great, always nice to find it when you're just about to give up.

As for Lyme disease, it's all too common here in Denmark as well, the deer population having exploded over the past several decades (at the expense of the hares), so tick checks are part of the routine. Thankfully TBE is (still, at least...) quite rare.

As for Lyme disease, it's all too common here in Denmark as well, the deer population having exploded over the past several decades (at the expense of the hares)

Oh wow, I had no idea the disease was over there. Ticks are disgusting. Sooo many diseases.

The deer/hare thing interests me - is it a disease thing, or browse competition, or what?

And, why have the deer exploded? Less agriculture? Less hunting? Easier winters?

Jimi wrote:The deer/hare thing interests me - is it a disease thing, or browse competition, or what?

And, why have the deer exploded? Less agriculture? Less hunting? Easier winters?

It's probably wrong of me to say "at the expense of" since the two trends are likely not directly related, though indirectly they almost certainly are.

Both are thought to be an effect of a complex set of issues but the changed methods of agriculture are certainly significant contributors in both cases, probsbly mostly so in the case of the hares. They have suffered greatly from the increased efficiency of Danish agriculture, weedless pesticide sprayed fields not providing the sustenance offered by the more extensive farming of days gone by. Hunters' take is generally considered a good indicator of population size and in the case of the hares this has dropped from above 400,000 / year until the early 1960's to less than 40,000 last year. The take of partridge, which has much the same habitat preference has dropped from 300,000 to below 20,000 through the same period.

Where the hare has suffered from new production methods, the deer have benefitted, because yes, winters have become easier, since the amount of seeds sown in autumn, and hence the amount of green winter fields has grown dramatically. Other factors thought to contribute to the growth in the deer population include climate change and selective hunting of adult males. Annual take was consistently below 20,000 until the early 1950's. By 2007 it was above 130,000. Checking up on it for the purpose of writing this reply I was surprised to discover it has actually gone down the past decade, dipping to just below 100,000 last year due to a disease outbreak. I knew this had occurred but thought the population had rebounded - apprarently not.