Yesterday evening, I stopped by my dad's for a minute and then decided to take a quick 1/2 hour cruise for heck of it. About 15 minutes in, I came across a Valley Gartersnake that had just been run over and was frantically winding around itself. I stopped my truck, got out, and saw that the head was badly crushed and there was no chance of recovery. It also looked like it could have been gravid and I thought to myself, damn that sucks... I decided to put her out of her misery, but as soon as I moved her, she stopped moving and died nearly on the spot. So I left her there and continued down the road. No more than 50 ft ahead, I came across another Valley Garter DOR of the same size. It looked like it had been hit that morning, ran over a few times during the day, and there were DOR babies scattered about. They looked to be fully developed and intact aside from being run over. So, then I thought... damn, I wonder if there's chance to save some fully developed young in the one I just past up? So, I popped it in reverse and the rest is in the video...

Crazy, thanks for sharing!

Unreal...one of the most amazing Good Sam acts I've ever seen
Top

Awesome! Great work going back and saving them. Were the ones in the membrane still alive?
Top

It was a truly unique experience... left me with a solemn feeling.

In the 2nd picture of the snakes inside the membrane, there's an individual who's stretched out along the bottom and has his head curled underneath his body and out of sight. In the 3rd and 4th pic, his head is visible. That one was aggressively crawling around in there, looking for a way out. I wish I would have filmed it, but there was a lot going on all at once and I felt like I had limited time. He was the one who eventually poked through in the video. I was hesitant to remove them from the amniotic sack (if that's what it's called?) at first and instead tried to coax them to do it themselves. When I wasn't holding a camera or my cellphone for video, I was gently unraveling the sack and delicately examining & extracting. The coiled up individual in the 1st picture of the membrane, I removed myself from what looked like a 2nd chamber or pocket of the sack. As you can see he was covered in fluid and just sat there awhile * adjusting to the new environment. He lived along with the other one who finally poked himself through in the video. I finally ended up pinching a hole in the sack to extract the others. When I did, the first one out gasped for air and it looked like it's lungs collapsed. The whole extent of the upper half body caved in to the ribcage. I think he was either underdeveloped or maybe the shock of being removed caused it... He may have been damaged when the mother was run over as well. My guess is it was because of the transfer from liquid to oxygen too quickly. The other one I removed didn't have that reaction, but it didn't look to have survived either. It fell limp when I picked it up and it never moved. However, I still put that one over in the grass and covered in with a little canopy of dried weeds just in case it woke up later on*

* I didn't want to include this in the first paragraph because it would have been too jumbled and distracting. There were a couple experiences I had when I was a young boy that lead up to me kinda knowing how to handle this situation. I figured I'd share them for some more in depth insight. When I was a kid, I had a pet gartersnake that had a broken back. One day I noticed he had accidently fallen into the water dish and drown... I pulled him out and continually nudged and poked at him, letting him lie there awhile, then nudging him again, all the time praying for it to live. After about 5-10 minutes of that, he snapped out of it and looked like he had regurgitated water. He just laid there and in about an hour he was back to normal. Another time I was visiting an aunt in Oregon for Thanksgiving for a week while school was out. It was raining off and on the whole time I was there. When the storm had died down, I went out during the day exploring and found some kind of Ensatina in the firewood pile and there were Newts crawling all over the wet street. Eventually I came across an overflowing creek in a field and saw a 2 ft gopher snake belly up on the embankment. It reminded me of E.T. I thought at first that it must have gotten flooded out and then left on the land when the water levels went down. Then I remembered that pet gartersnake experience... so, I picked him up. He fell limp and never moved. I took him back to my aunts cottage where we were staying and wrapped him it up in the blanket on my bed. I sat there with it for at least 20 minutes, holding it on my lap rubbing it softly with the blanket until eventually started moving. I ended up letting it go under the house because my granddad wouldn't let me take another snake home

Because of those two experiences prior to this, I had a little something to go on... So, if a reader out there comes across a similar situation, maybe this will help

I knew the one covered in liquid would most likely eventually adapt himself and felt it was best not to rush that. I feel like there still may be a chance for the other to have revived himself... maybe not though.
Top

I like your avatar. I used to work for a custom fireplace mantel installation company that had a logo nearly identical to it.
Top

That little Garter you helped breath life into was looking up to you ... you were his/her source of inspiration to PUSH ON THROUGH a terrible life disaster ...!

Hey - its ok to tear those sacs open - the sooner the better. Once cut off from the mother's blood oxygen it could be the only chance they have if they get too weak from depletion to get out themselves. Even weak ones can make it if they breathe and dont get too warm.

I swear this post is going to change certain encounters.

Cut open dead egg layers too. Do It.
Top

That little Garter you helped breath life into was looking up to you ... you were his/her source of inspiration to PUSH ON THROUGH a terrible life disaster ...!

Don't all of YOU owe ME cigars and a drink!? lol

It was pretty funny actually. I was just telling Owen on a picture comment that the experience reminded me of that scene in Rasing Arizona where Nicholas Cage is chasing the babies around the room and they're getting the best of him...lol I turn around, one's gone... then one's crawling under my truck.... Grab him, and behind me, one is going into oncoming traffic.... then, pull out another snake... burp the one fresh out of the sack...go take that one to the grass... watch out for the one climbing under my foot... get some pics.... now go get the cellphone for video....LOL It was all happening at once and pretty hectic. All looking the same too.

At least I finally got a new cellphone after 5 years of that demon android, so the video came out pretty decent

That would have added to the chaos

Hey - its ok to tear those sacs open - the sooner the better. Once cut off from the mother's blood oxygen it could be the only chance they have if they get too weak from depletion to get out themselves. Even weak ones can make it if they breathe and dont get too warm.

I swear this post is going to change certain encounters.

Cut open dead egg layers too. Do It.

Thanks, Kelly. I hope So! That would be rad

Now people are gonna start seeing cut up snakes on the road and thinking WTF...?

Thanks for the info! I really had no clue what I was doing other than, something... no prior experience except for gutting my own fish when I was a kid, after fishing trips. I smelled my hands afterwards expecting to smell musk, but it actually smelled EXACTLY like a sunfish

Not too bad. I haven't fished in over 10 years, so in a weird way it kinda brought back some nice old memories.
Top

Nice work. I had a similar situation a couple years ago, but unfortunately, it was caused by me. I was mowing the lawn and nicked a gravid Northern Ringneck Snake, cutting her almost in half. I noticed movement inside, and finished the job with a pocket knife. 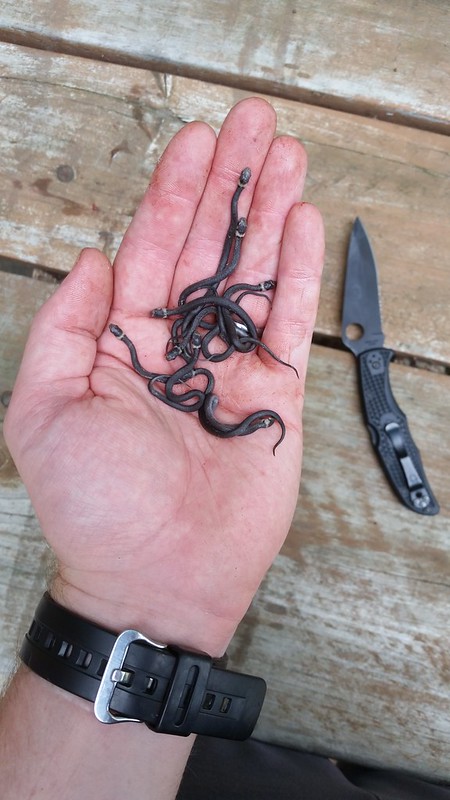 That's cool you have ringneck right there in your yard. Next time you see one, could very well be one of the little guys you saved...
Top

Misenus wrote:Nice work. I had a similar situation a couple years ago, but unfortunately, it was caused by me. I was mowing the lawn and nicked a gravid Northern Ringneck Snake, cutting her almost in half. I noticed movement inside, and finished the job with a pocket knife.

Pat, are you suggesting that there were fully developed embryos inside the female ringneck snake? Ringnecks are oviparous. I am not aware of any cases of ovoviviparity documented in this species. If these were fully developed neonates inside the mother that would be a rather interesting find. I'm assuming you found eggs and managed to get them to successfully hatch, but I just wanted to double check. Can you give a bit more info?
Top

That's one of the coolest things I've ever seen Porter. Good on you!
Top

Misenus, your "ringnecks" appear to be Storeria - which would explain the live birth.
Steve
Top

I know I am Late on this one but the was some awesome stuff. B/Z

Ronquillo08 wrote:I know I am Late on this one but the was some awesome stuff. B/Z

daniel wrote:That's one of the coolest things I've ever seen Porter. Good on you!

Well done Porter! Not just the save, but the documentation as well.
Top

Calfirecap wrote:Well done Porter! Not just the save, but the documentation as well.