It's been a few months since I've been on the forum. I've decided to start splitting my herping up in sets of 3 months, though this installment will be an exception. So, without further ado, here's herping in NW Florida and South Alabama from January 1st through today, April 2nd.

My first herp of the year wasn't really mine to claim. We got a huge storm in early January that caused some serious flooding. This baby Common Snapping Turtle was washed up into a friend's yard. She didn't know what to do with it and thought it was sick. She brought it to me and I realized it was just a shy little hatchling, and turned it lose in a beaver pond (only source of water) near her house.

Still in January, I got my first snake of the year, a basking Brown Watersnake. It was far up in the backwater reaches of a local river's floodplain.

Later in January I went looking for Gopher Frogs. The dry winter we had last year turned up nothing, but I did find this Eastern Mud Turtle with an unusually shaped carapace.

On the way home from the unsuccessful trip for Gopher Frogs, I found this young Southern Black Racer. With snakes being slow during winter, I was quite content with a black racer.

I went herping a few weeks later with some friends. One of them happened across this nice little Brown Watersnake juvenile that was out and about, despite being a cool night in the lower 60s.

We then went to a spot near my house to hike around a small stand, only about 25 acres, of virgin longleaf pine forest. Not many herps were found, but we caught this little Eastern Fence Lizard and took some photos of it down by the water, looking up towards the stand.

A week or so later, I was poking around another place, looking for salamanders or small aquatic snakes. All I found was this really tiny little Southern Two-Lined Salamander.

I went to school a few days later and made a stop by a nice little spot and found this Bullfrog and young Southern Banded Watersnake. 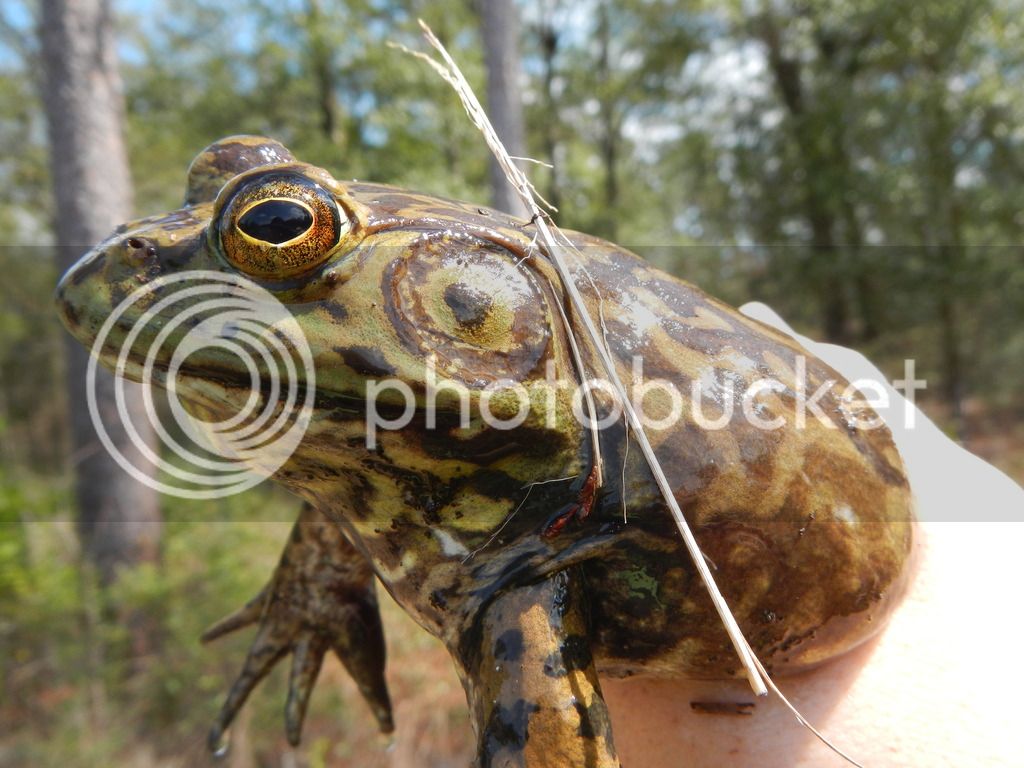 Later that night I passed down my favorite little road and found hognose food sitting out, lots of it. I only stopped to take a photo of one. An Eastern Spadefoot Toad.

A few days later I did some more cruising and hiking, hoping to turn up a Diamondback or Cottonmouth basking in a stump. Instead, I found a little Southern Black Racer and young Gray Rat Snake.

Later that night, a warm night, I decided to walk around down by a river to see what I could see. I got to the water and I really had to "relieve myself". After finishing that, I looked down and realized that this little guy had just undergone a rather unpleasant experience. At least he wasn't too angry to allow me to take some photos of him. A little Western Alligator Snapping Turtle (Macrochelys temminckii).

That night was only followed up by a lone little (big) Bronze Frog and a chorusing Spring Peeper that didn't have the typical cross on its dorsal side.

A while later I went herping with Josh Young again. We didn't have very much luck, checking out a spot for rubers. Josh did flip this Slimy Salamander though.

Later we tried our hand at finding a king snake. No luck with that, but I spotted two Blue-Stripe Ribbon Snakes (Thamnophis sauritus nitae). Unfortunately the only one I could get photos of was in shed.

Later I parted ways with Josh and went north. I was hoping to find some Mud Snakes as it was in the mid-60s. No luck, but I did get a Dwarf Salamander and Two-Toe Amphiuma.

After a few days to recover from an all-nighter I went out again with a friend to look at some general landscape to do some ecology teaching. We cruised up this adult Common Snapping Turtle sitting road-side.

After a few hours, we found this Southern Black Racer with some facial damage. Before anyone asks, no, not SFD. Either early-spring moisture sores or more likely, in my opinion, an old battle scar from a scrap with a food item. 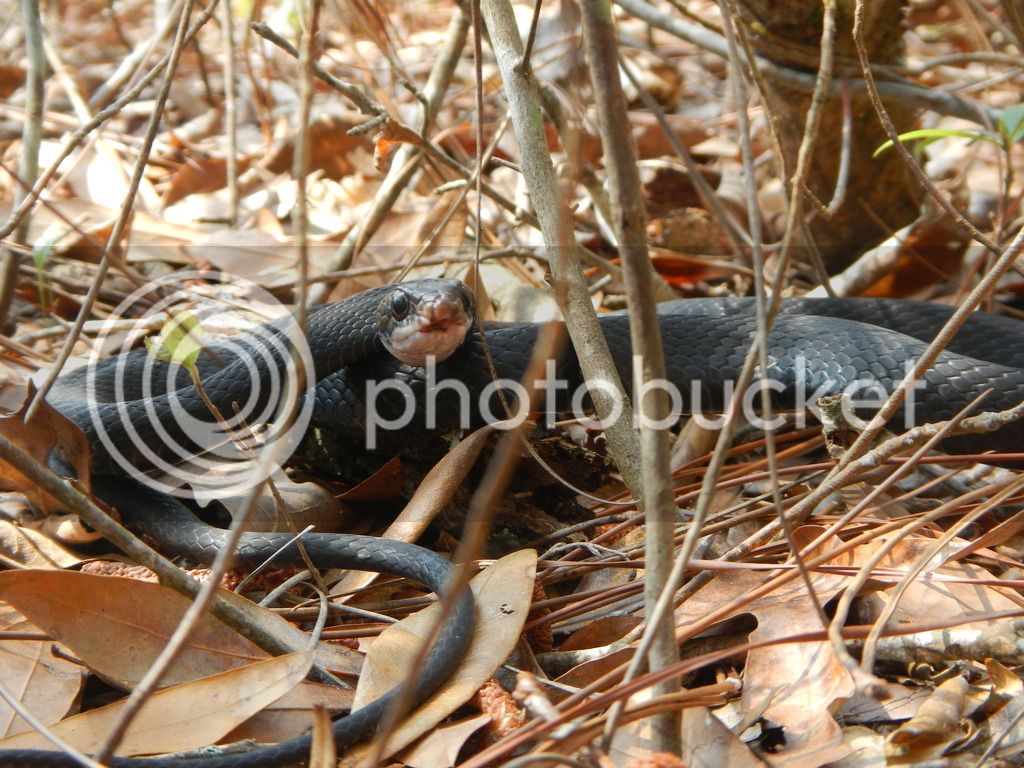 After a little bit we flipped this little North Florida Swamp Snake under a 4x4 sitting in the water. It posed nicely, I don't know why people say they are hard to photograph. I've not really had any issues with the two that I've seen. Maybe that'll come farther down the road.

We also found a young Southern Banded Watersnake. I get one or more of these every time I visit this pond.

I went out again the next day with a group of friends and we had quite a successful day, despite me forgetting BOTH of my cameras at home. Luckily my friends were happy to take pictures for me. It started off with this in-shed Scarlet Kingsnake.

After a while we hiked up this little Eastern Diamondback Rattlesnake, about 2'6" to 3' long.

Not 10 feet from it was a yellow Eastern Garter Snake watching us make idiots of ourselves as we photographed the Diamondback. We didn't even pay mind to the garter snake. It just sat there and waited for us to photograph it after we were done dancing around the EDB haha.

Later we went to go look for Swamp Snakes to help a friend get his lifer, instead we found Eastern Diamondback number two, this time a little one. Likely last year's baby.

Later that night we went "salamandering" and got some Mole Salamanders. A lifer for all of us. I actually got my lifer back in January but I had no camera. I still had no camera, but at least my friends did.

There was also dozens of Barking Tree Frogs calling, in early March.

Another Mole Salamander getting ready to metamorphose.

Later we made another shot at Swamp Snakes. We struck out again but while I was shining out into the water to try and spot some swimming. I felt something on my feet. I looked down to be greeted by this big girl just sitting there. Those are not my feet in the photo though, they are the feet of one of my friends. It just sat there, it never even gaped at us.

A week later I headed back over towards the ANF. Not a lot of action, but I did see this Three-Lined Salamander out and about. 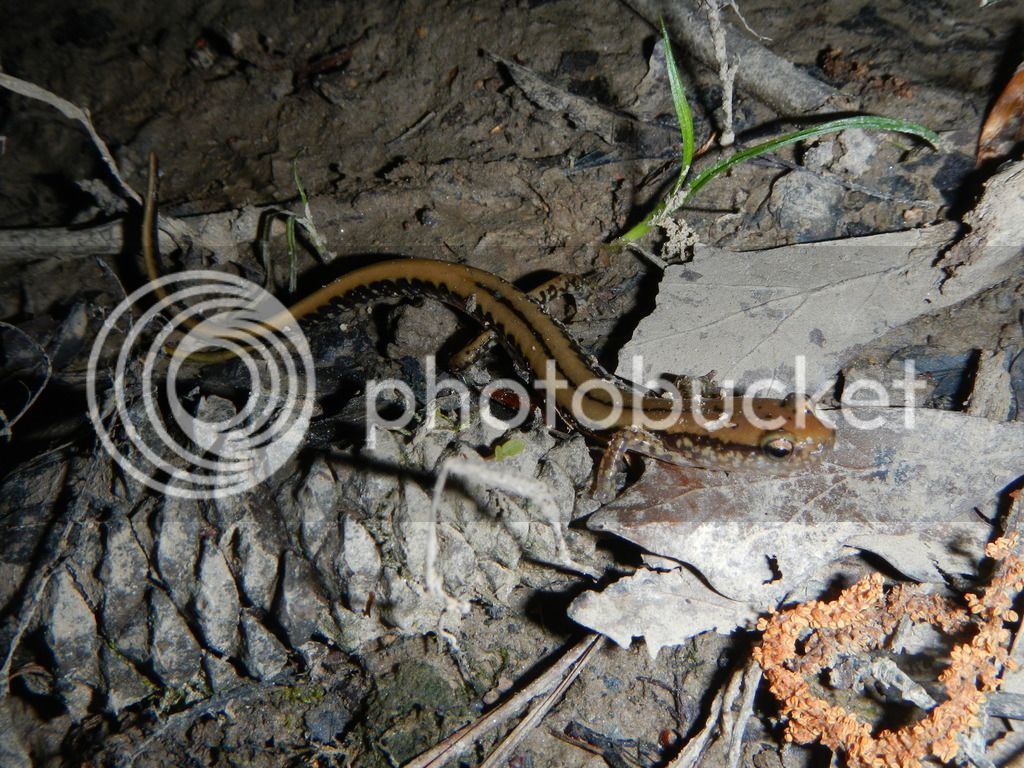 Later that night I tried for Mud Snakes again, again to no avail. I did hand-capture this Greater Siren though. It didn't even squirm until I had it on land to photograph.

Shortly after I flipped this little Dwarf Salamander under a rock.

The entire time I was looking around, I had this pig frog watching me, kind of, with its butt.

A few weeks later I went cruising with a friend for Southern Hogs and Pine Snakes. No luck, but we did get some common stuff such as Black Racers, a Garter Snake, a Ribbon Snake, some Banded Water Snakes, and some un-photographed cottonmouths that escaped.

Last Monday I tried cruising. I thought I had struck out entirely. I rounded a bend thinking to myself "A Heterodon, Pit, Lampro, or Crote would be nice about now. I'll even take a Sistrurus or Agkistrodon". As I finished that thought I rounded a corner and saw this little baby Eastern Diamondback, definitely last year's baby.

On Wednesday I had started looking for Florida-Black pine intergrades with a friend. There was too much road work going on where we were so we decided to go check a flip site that also turned out to be a bust. We then went to one of my favorite river spots and found my lifer Red Belly Watersnake, Nerodia erythrogaster erythrogaster.

We also found this Southern Banded Watersnake that posed nicely for us.

We ended our day with this Dwarf Salamander that we only took one photo of before the mosquitoes chased us away.

Yesterday I had a lab for school. Afterwords I went out herping with some classmates (one of which has become a regular herping buddy) at the same river as my lifer Red Belly Watersnake. It started by myself walking right past this Eastern Mud Turtle that one of my non-herping classmates spotted.

After a bit we walked up upon this Southern Banded Watersnake that did its best to give us a cottonmouth impression.

The same friend that spotted the mud turtle also spotted this little neonate Eastern Ribbon Snake that was full of cricket frog, but appeared to have quite a scar, an old injury that has healed over since then.

One of my other friends spotted this River Frog swimming along that I caught for some photos. It's hard to believe that I only got my lifer last year, these guys are everywhere now.

I then went and found my second Red Belly Watersnake in under a week, this time a little neonate!

Later on in the day we ended with another Eastern Mud Turtle.

Then today, today I finally got a target that was at the number one spot of my target list for this year. I saw one in 2015 that I grabbed thinking it was a water snake, but dropped after I saw what it actually was. Then I saw another DOR last year. Today, on my way to school, I cruised what I thought was a baby Eastern Kingsnake at first. Once my car stopped and I got out, I was extremely happy. I had cruised up my lifer Eastern Coral Snake, Micrurus fulvius in Santa Rosa county. Words cannot describe how happy finding this snake made me. 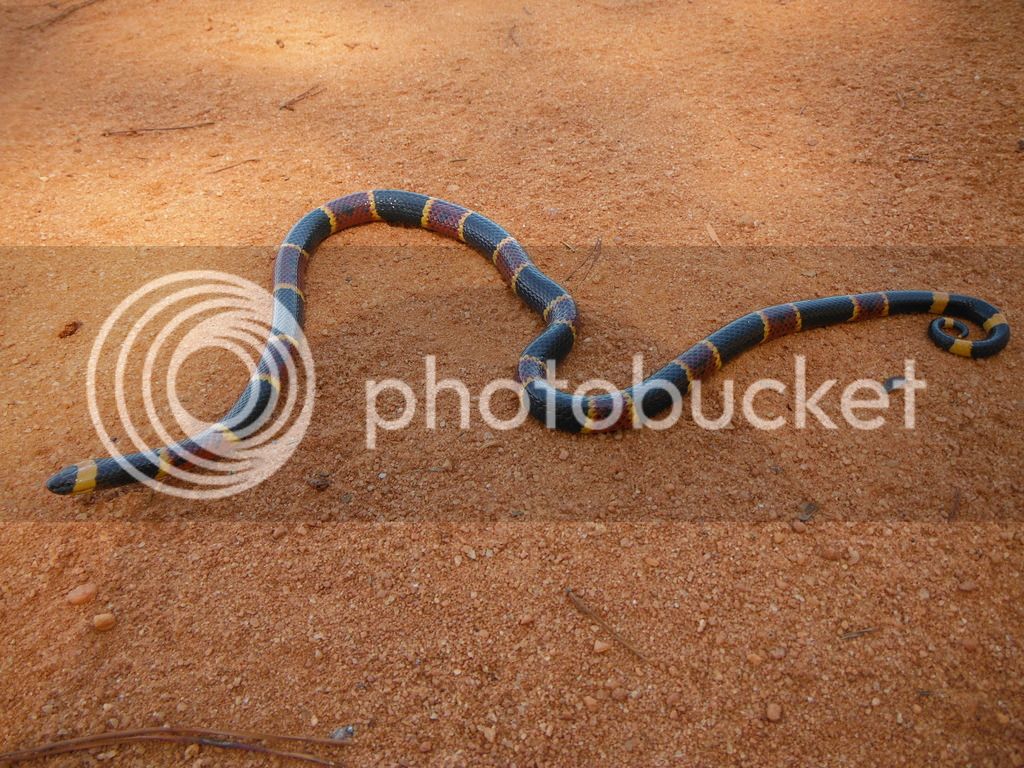 Well, that's my first installment for the first quarter of this year. I'll have more to come over the next three months. Stay tuned, there's sure to be some good critters and neat places involved.
Top

Whew! Great stuff - makes me miss that neck of the woods.
Top

Whew! Thanks for giving me my panhandle fix.
That greater siren was surely impressive.
Top

Hopefully there is more to come as spring gets warmer and I transition to night cruising / hiking as summer sets in.
Top

Very nice. Have eastern kings been documented recently in your area?
Top

Yes but not many, and none by me. Not for a lack of trying either.
Top

That's some great diversity, Nick! Wish I had spent more time in the panhandle. That Greater Siren is a monster!

About how many more species in your area do you still have left to find?
Top

mtratcliffe wrote:That's some great diversity, Nick! Wish I had spent more time in the panhandle. That Greater Siren is a monster!

About how many more species in your area do you still have left to find?

Thanks. I don't have too many left. Just a couple of Pseudacris, an Eastern King, both Earth Snakes, a Little Brown, both Green Watersnakes, Rainbow Snake, Indigo (have to get into AL though), Tiger Sally, Flatwoods Sally, Seal Sally, Southern Dusky, and Spotted Dusky, Four Toe Salamander. I think that's it. So, 15 (16 if I count Indigo) species until I have seen all the herps that can be found in Florida on the west side of the Apalachicola River. I'm pretty sure I thought of everything. I may have forgotten a salamander or small cryptic snake, but I don't think so.

There is a few species that I've seen, but that I'd like to see again, such as Ornate Chorus Frogs. I had lots of photos on my old computer when it broke. I had to pick and choose some of my favorite photos to save, I couldn't get them all.
Top

Good stuff! Congrats on the lifer coral: I can still remember that thrill from mine several years ago.
Top
Post Reply
9 posts • Page 1 of 1