I've had a number of people, I think Flaxington and Trageser specifically, recommend the seldom-practiced technique of simply sitting still and seeing what herps (or other denizens of nature) show up. And I nearly never have the patience for it, nor am I certain that they do. But every once in a while I've had some interesting results, so I thought I'd post it.


The earlier one that came to mind was from June 2015. I was sitting at our Bangladesh site recording frog calls at night, the only reason that I was staying still and in one place. Suddenly a long Green Cat Snake comes rushing into the pond and starts moving around the branches over the pond with urgency. I'm pretty sure he was hunting frogs, but unfortunately I ruined the moment by moving towards him and he saw me and disrupted his behavior. 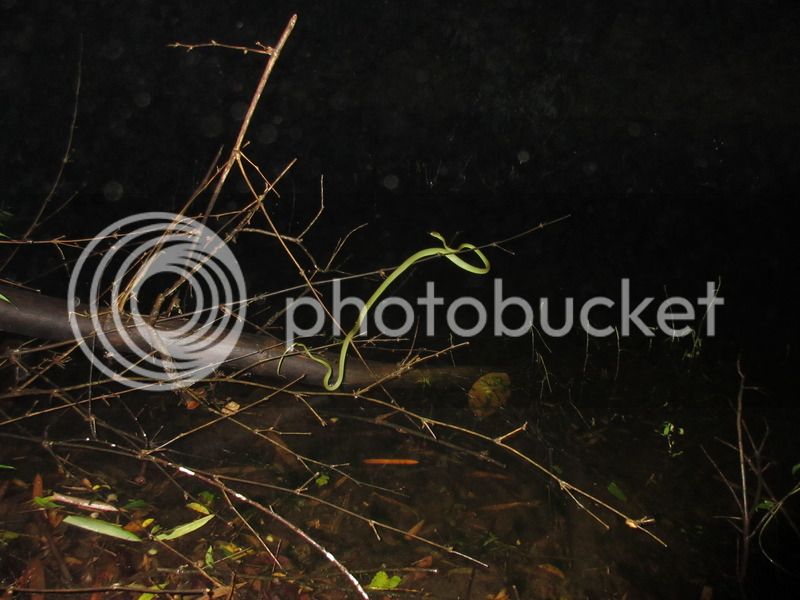 The more recent incident was just this week. I was herping outside Manila (had to go there for a conference and ended up getting asked to lead a community workshop on snakes to Christian organic farmers). During mid-morning I stopped for a while in one place to look up at birds in the canopy and try to get a few shots. After about ten minutes of not really moving, suddenly something red whizzes through the air about 6-7 feet away from me but in my peripheral vision. My mind wanted to say "insect" for a moment, but it moved nothing like an insect, and I realized there was only one herp that could have looked like that. Sure enough, I look at the tree that it flew towards...and had my first flying dragon. It moved up the tree quickly so I only got a few more distant photos.

In the early evening I returned to the site, hoping that I could get a better look at more flying dragons. I sat quietly and watched, occasionally flipping the pages of a book for about 15-20 minutes, before a lizard showed up. But it wasn't a dragon...instead it was my first tree skink, running around at a height of about five meters on the same tree the flying dragon had jumped from!

These are the otherwise non-descript trees that both the sightings occurred on:

Does anyone else have good stories of herps coming to you, rather than you going to them? Perhaps ones where you did a better job of staying still and getting the chance to observe behavior than I did?
Top

For the past few years a friend and I have spent a lot of time on lawn chairs watching a large rock wall in the upper midwest. It's great fun with a good set of binos and a luke warm 6-pak of PBR's. We see tons of Fox, Milk and Garters and always have a bet on the first species to show. Whoever guesses correctly wins an imaginary stick of gum. We are typically fishing and drinking water by 10:30 A.

Cool stories, I think that hanging out in an environment and waiting and watching is under appreciated. I don't think its possible to turn up the high numbers of herps as some other methods may produce but its certainly worthwhile.

I work with poison frogs (Ranitomeya imitator) and this particular species maintains territories, there were many times I sat in their territories watching them move around, courting behavior, feeding, and just amazing to watch them use the vegetation as highways through their territories. I would also frequently see anole lizards while i was hanging out and one occasion a turnip tailed gecko who made his way out of an old tree.

There was one day when herping was not my goal but I was sitting on a log in the middle of my field site putting together equipment, I looked up and I saw something that looked like a line of caterpillars or something moving across the forest floor. I couldn't quite make out the whole shape of what I was seeing and then it clicked, it was a peruvian coral snake (Micrurus peruvianus) flowing across the forest floor right towards me. I watched it move across the leaf litter but as it got close to me I moved to catch it which betrayed my presence.

I love hanging out in one spot and seeing what happens, its great, although as mentioned before not always the best method for high #s of herps.
Top

While exploring Sam Houston National Forest near Houston, I came across a pond and thought I'd walk the edge of it for western pygmies. Instead I found such a multitude of aquatic snakes (diamondback, yellow bellied, broad banded waters, western ribbons, and cottonmouths), probably 10 in a matter of 5 minutes, that I decided to park it next to a large cottonmouth basking on a log and watch the pond. He never moved, but over the course of about 30 minutes many more snakes materialized, like two diamondback waters basking directly in front of me that took me about 10 minutes to spot, and a broad-banded water that was foraging on the edge of the pond, moving from my left to my right before vanishing. Very serene.
Top

In some scenarios where I had high probability of success, like Tim, I've used a folding chair and binoculars. One that comes to mind is an abandoner sand pit, where in the 2nd or 3rd week of June, I'd set up at about 4PM, then sit till a little after dark. The target was Spotted Turtles that would come to lay eggs. One lucky time, I had three around me within 5 meters, all laying or digging to lay!

Another is a spot in west Texas where you can sit for hours in the car watching the interactions of Racerunners. This includes foraging, territorial spats, and mating (which is more like rape in their world.)
Top

BillMcGighan wrote:Another is a spot in west Texas where you can sit for hours in the car watching the interactions of Racerunners. This includes foraging, territorial spats, and mating (which is more like rape in their world.)

That was a good mention. I remember a similar experience of watching Cozumel Whiptails on Cozumel Island, foraging and interacting with each other.
Top

I like the second photo of the tree skink Jonathan!


When I'm out hiking alone, I often look for spots with a wide view of prime habitat to sit down and take a break. Rock outcroppings near a stream are really good. Lizards tend to start coming out after only about 5 minutes of sitting down. Granite spiny and banded rock lizards are two species that I've had good encounters with, a number of times, just by sitting. I've also observed a red diamond rattlesnake, a couple of Southern Pacific rattlesnakes, a desert tortoise, and plenty of birds this way.

Occasionally, I'll try the opposite technique: moving quickly and making a big ruckus by whacking bushes with a stick. The idea is to spook lizards out from their hiding spots under bushes. I don't really recommend this style of herping, unless you're in the right habitat and are really low on time. I've only had a little success doing this, in creosote scrub habitat, spooking desert iguanas and tiger whiptails.

I have quite a few friends who are accomplished and passionate birders and photographers. They always seem to see more herps than the herpers, especially those herpers who move quickly from one 'hot spot' to the next. I have often wondered if their stillness and their 'wait and see' approach to their hobby is what facilitates this.
Top
Post Reply
8 posts • Page 1 of 1