Here's Part 6 of my 8-part write-up for my month of October 2015 herping in Australia.

Part 5 of this seemingly interminable account left me in Wilpena Pound in Flinders Ranges National Park. My journey then continued north, with my next stop being the privately owned Arkaroola Wildlife Sanctuary. I had originally added it to my itinerary specifically because it is a good spot to see Red-barred Dragons. As luck would have it, I ended up seeing a fantastically beautiful Red-barred Dragon in Flinders Ranges National Park. So at this point I had no particular goal in Arkaroola; I just wanted to enjoy its spectacular scenery and see what I could find.

The usual types of road lizards greeted me on my drive north. 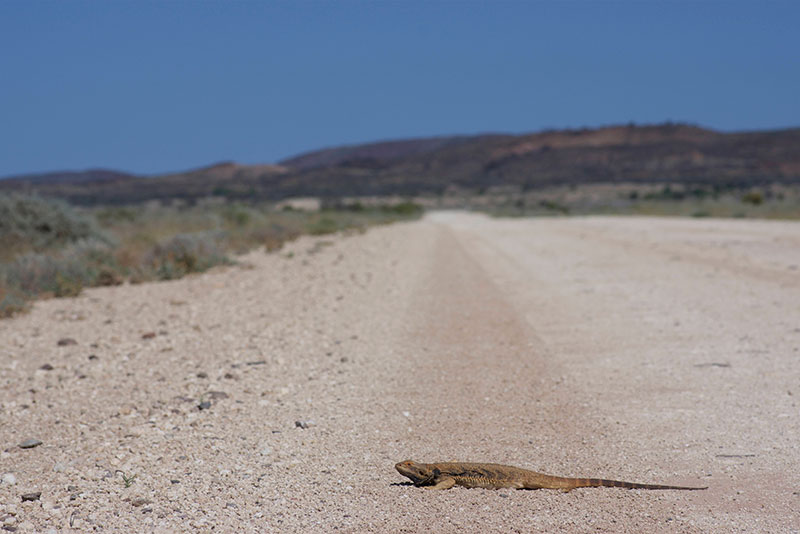 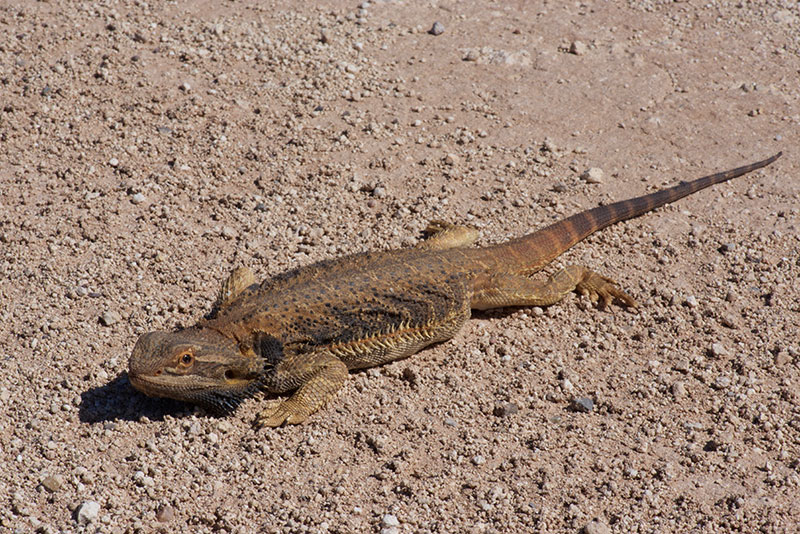 Central Bearded Dragon (Pogona vitticeps). I could never grow tired of seeing these. 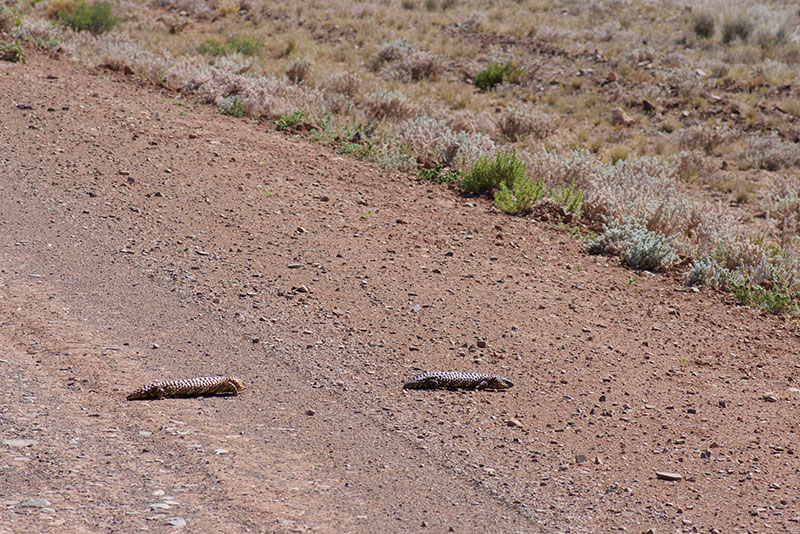 A bonded pair of Eastern Shinglebacks (Tiliqua rugosa aspera). This species is essentially monogamous, which is extremely rare in lizards.


Arkaroola was a beautiful, rugged area, full of rocky hillsides and gorges. 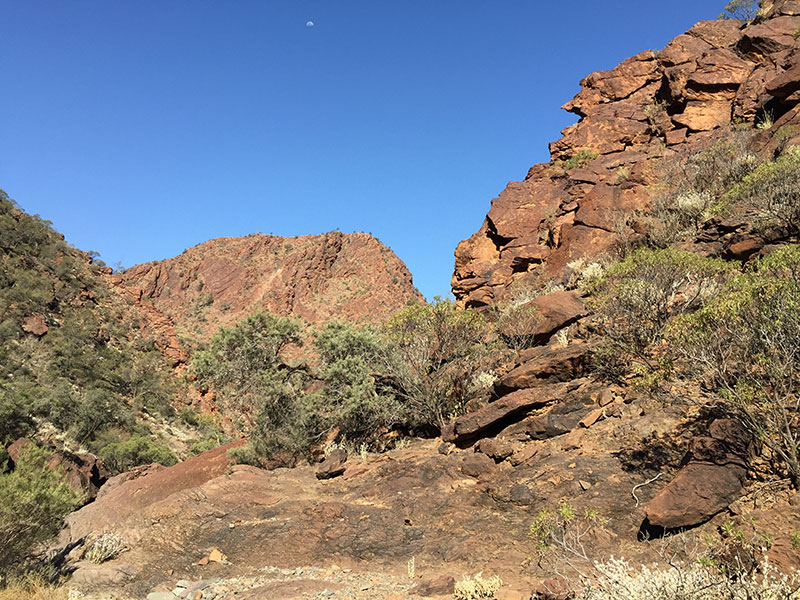 
Probably due to relatively cool weather, I ended up seeing just a handful of lizards there, and no other herps. All of the lizards were species I had seen earlier on this trip. 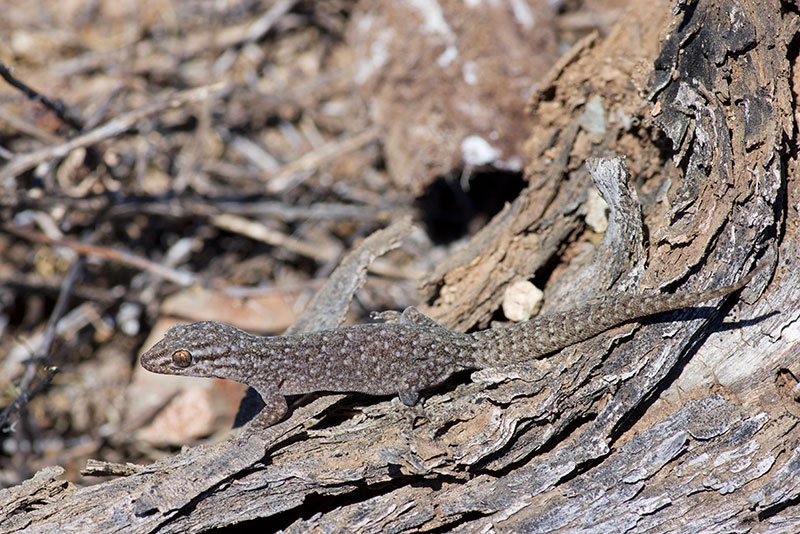 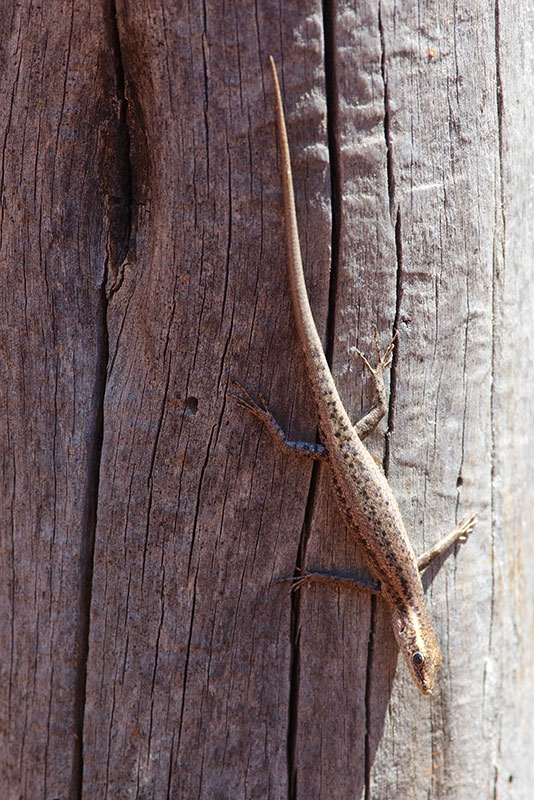 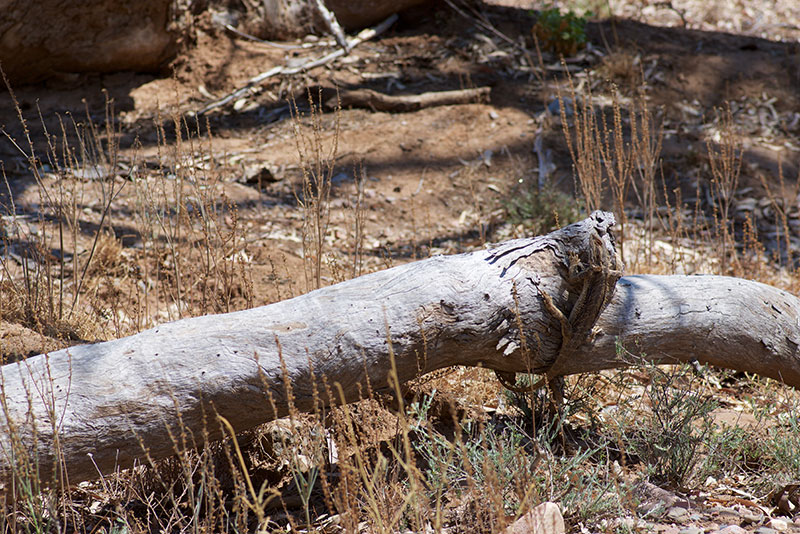 I was driving slowly on a 4WD track when I passed this log. My brain registered the lizard shape when I was about fifty feet further down the road. I stopped and hopped out to investigate. 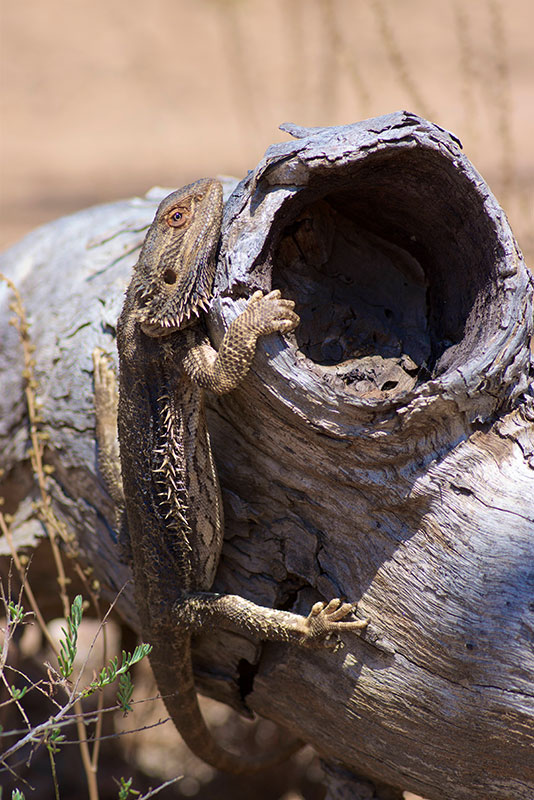 The beardie must have been pretty confident in its camouflage, since it let me approach for close-ups without moving a muscle. 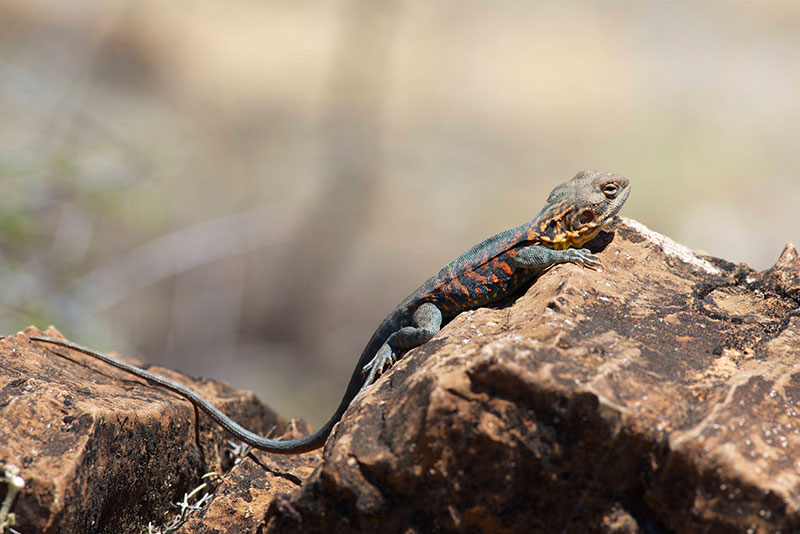 Red-barred Dragon (Ctenophorus vadnappa). This would have been the highlight of Arkaroola if I hadn't seen a prettier one back in Flinders Ranges National Park.


The true highlight of Arkaroola turned out to be its flourishing population of Yellow-footed Rock Wallabies, which were far easier to find here than in the various other parks I had been to whose promotional materials bragged about their own populations. 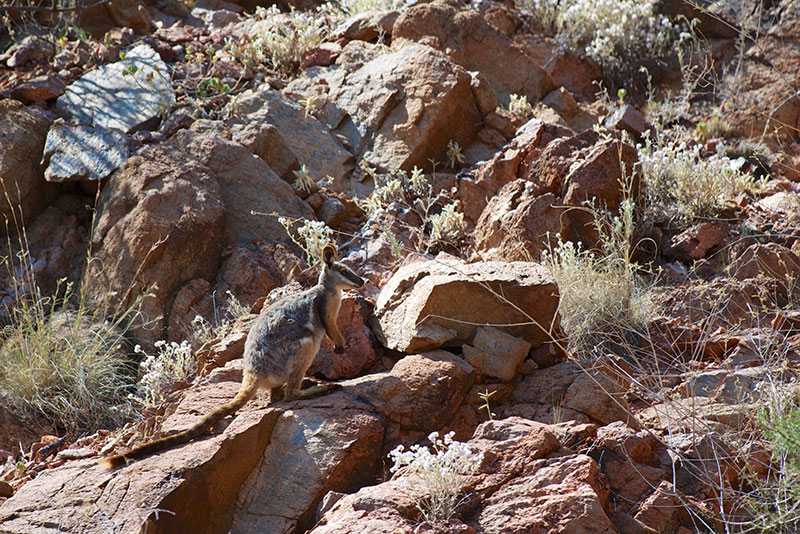 A Yellow-footed Rock Wallaby (Petrogale xanthopus) on a rocky hillside. I saw three or four in this kind of habitat. 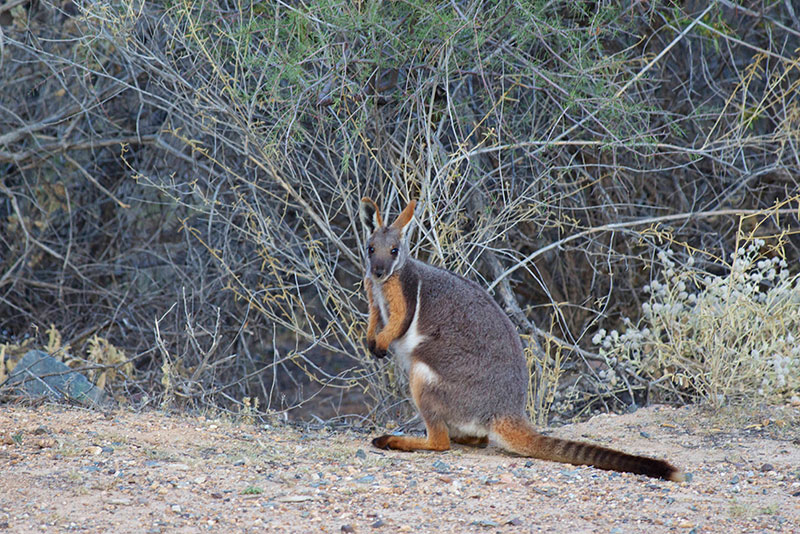 A Yellow-footed Rock Wallaby at the side of the road around dusk. I saw five or six on this stretch of road.


Australia is chock full of cool birds too, but I didn't pay too much attention to them. However, even I cannot resist a parrot. 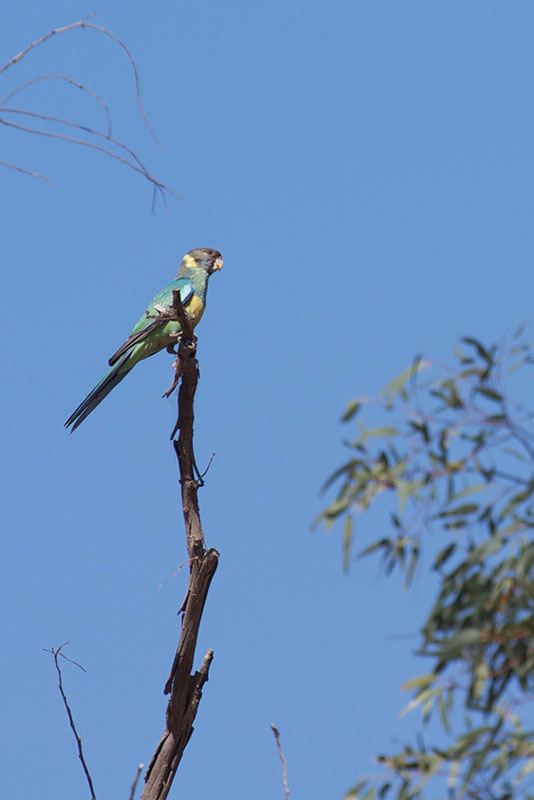 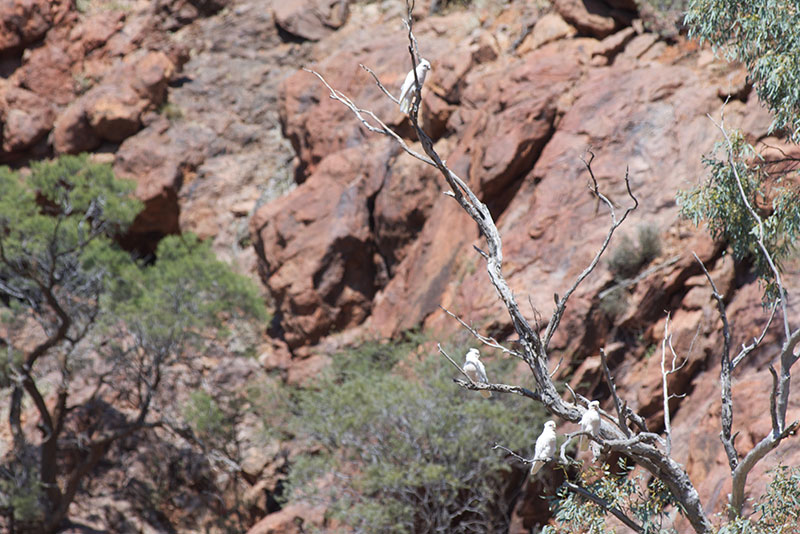 A few non-colorful Little Corellas (Cacatua sanguinea). They do have pastel blue rings around their eyes, but you can't see that at this distance.


After Arkaroola I headed still further north (and west) to the northernmost South Australia destination of my trip, a small town called Marree. As usual, I saw some excellent Australian wildlife on the drive. 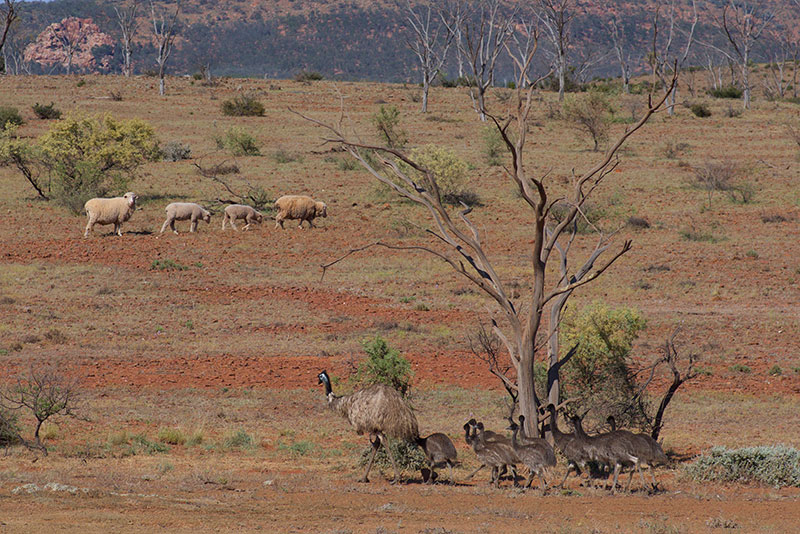 A mama Emu (Dromaius novaehollandiae) and her large brood, passing some symbols of modernity. 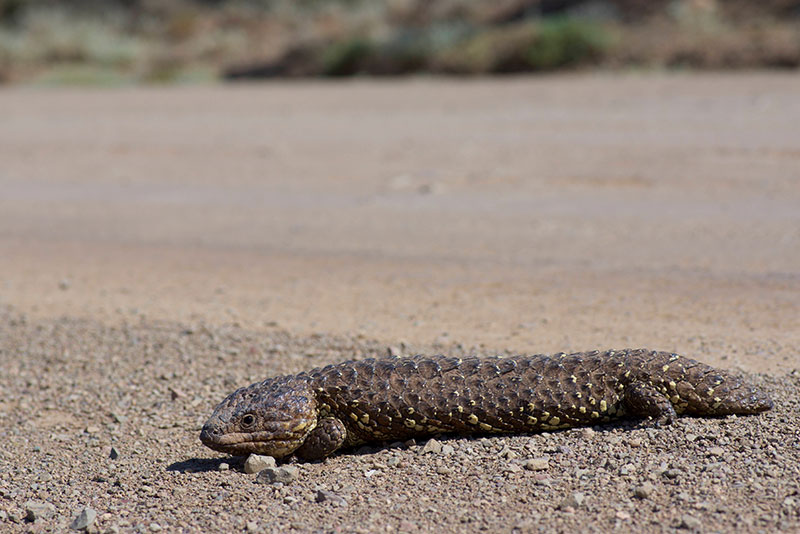 It seems like the right time to toss in another Shingleback picture. One can never see too many Shinglebacks. 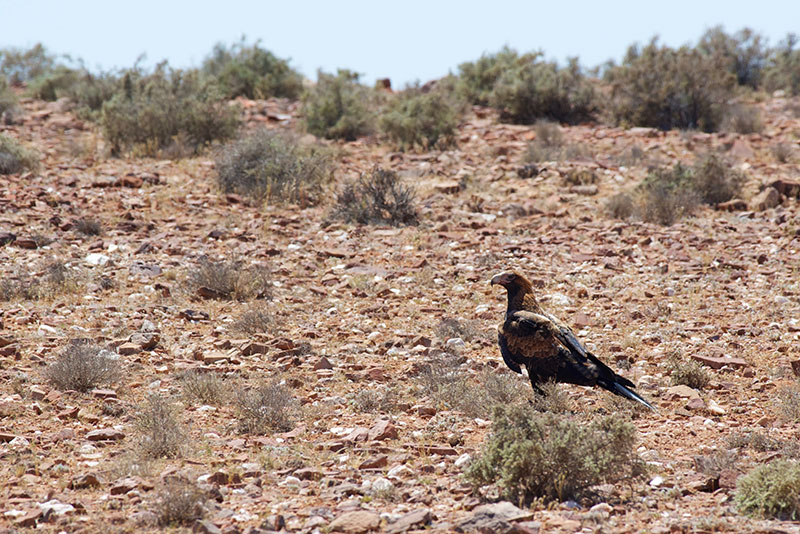 Australia's largest raptor, the Wedge-tailed Eagle (Aquila audax). This one had been scavenging a roadkill kangaroo before it flew a few yards off the road when I approached. 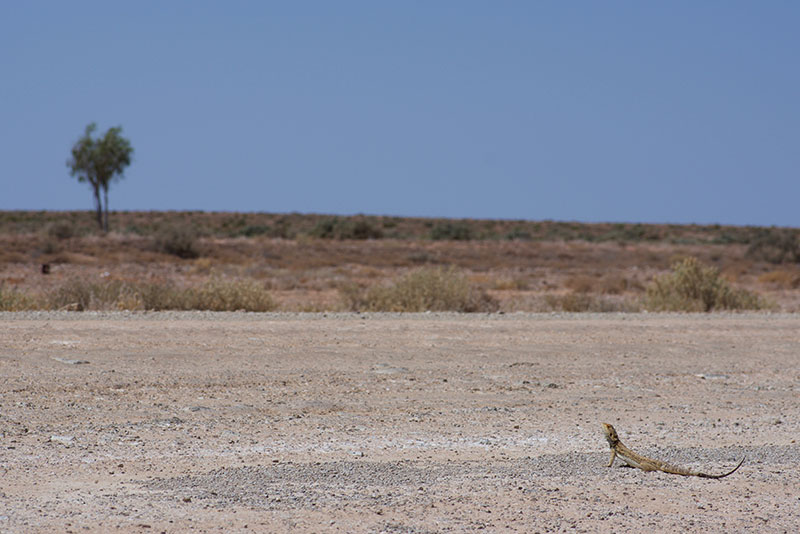 Yet another Central Bearded Dragon. They look so proud in this pose.


Much of the land around Marree is nearly featureless desert. I had hoped to find a Gibber Dragon (Ctenophorus gibba), which make their home in this area, but struck out on those. 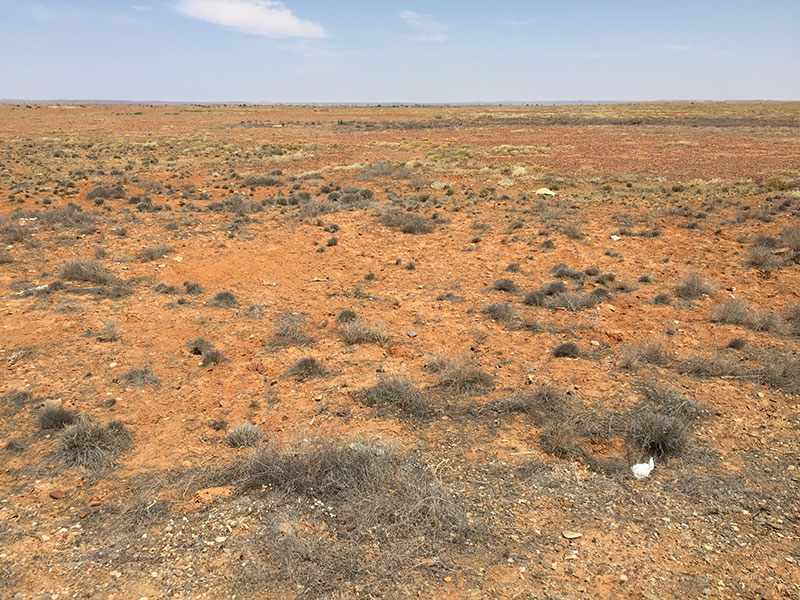 
I did get a consolation prize though when I turned a piece of plywood and uncovered an Eyrean Earless Dragon. Its reaction to being exposed was to run around in circles like mad and then dash back under the nearest object under which it could dash. Generally this was the same piece of plywood that it had been beneath originally, though a couple of times it was my shoe. After quite a few rounds of this game the dragon must have gotten a little tired, because it finally stopped long enough for me to get some photos. 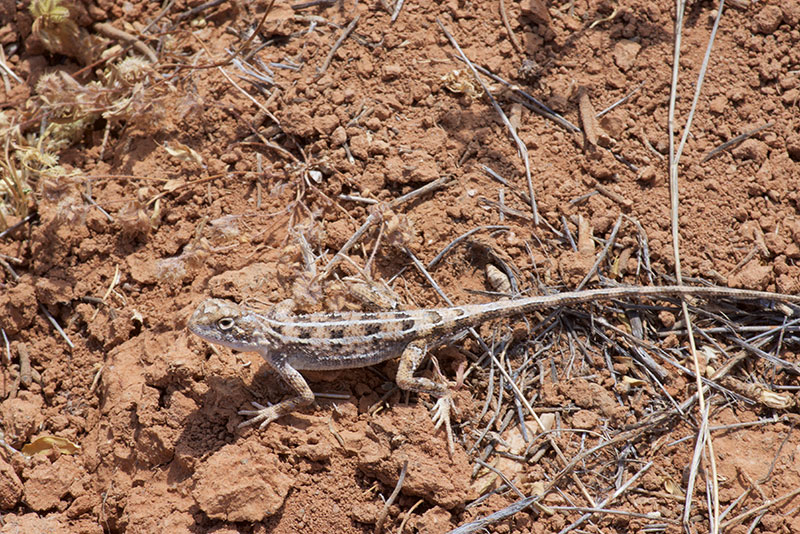 
My most interesting find in the Marree area was a self-proclaimed Sculpture Garden, consisting of various works of art created by reassembling hunks of old metal objects in creative ways. This was off the Oodnadatta Track twenty or thirty miles northwest of Marree, not exactly a tourist hotspot. It had a bit of a Mad Max/Wolf Creek feel, but I found it quite endearing. 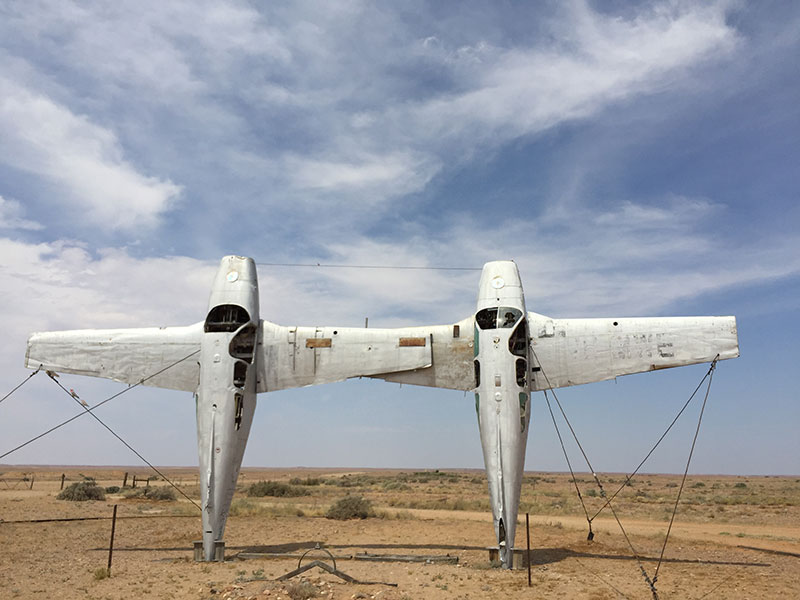 The biggest "sculpture" by far 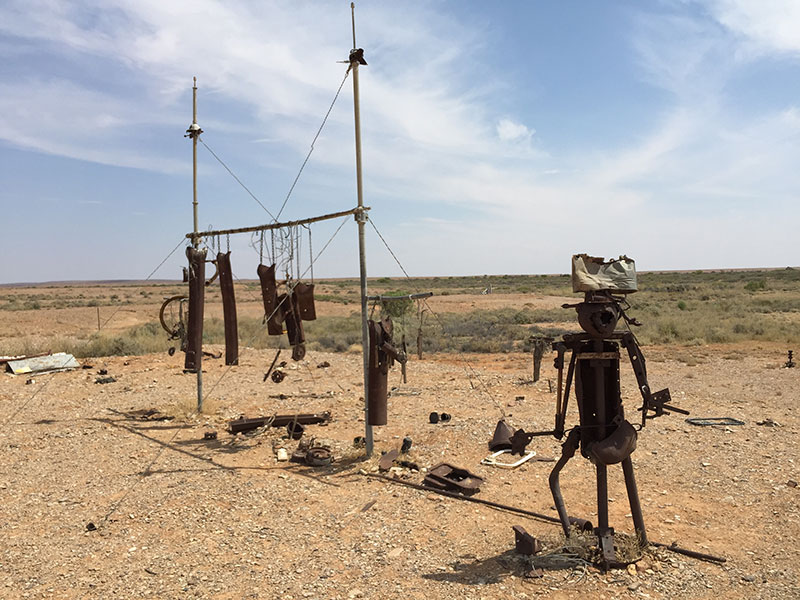 This one definitely seems creepy. I think the guy in the foreground has been doing unspeakable things to those other hunks of metal. 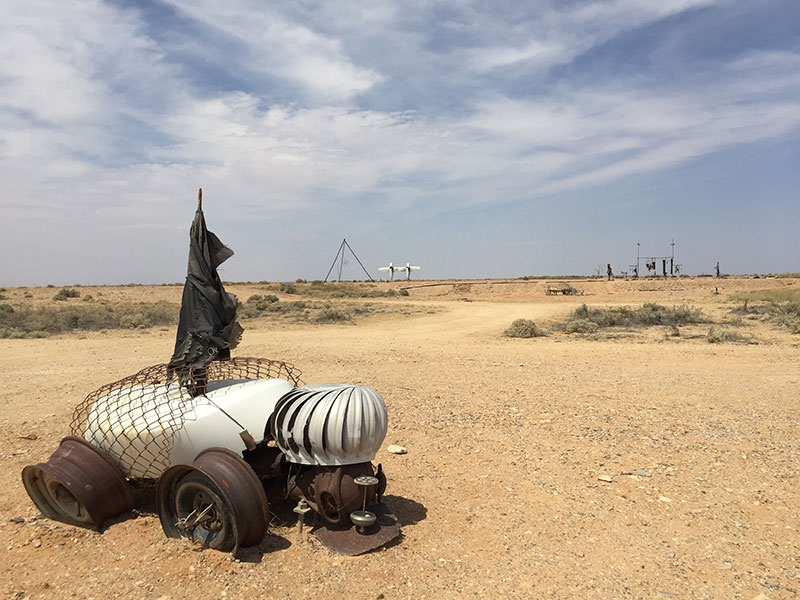 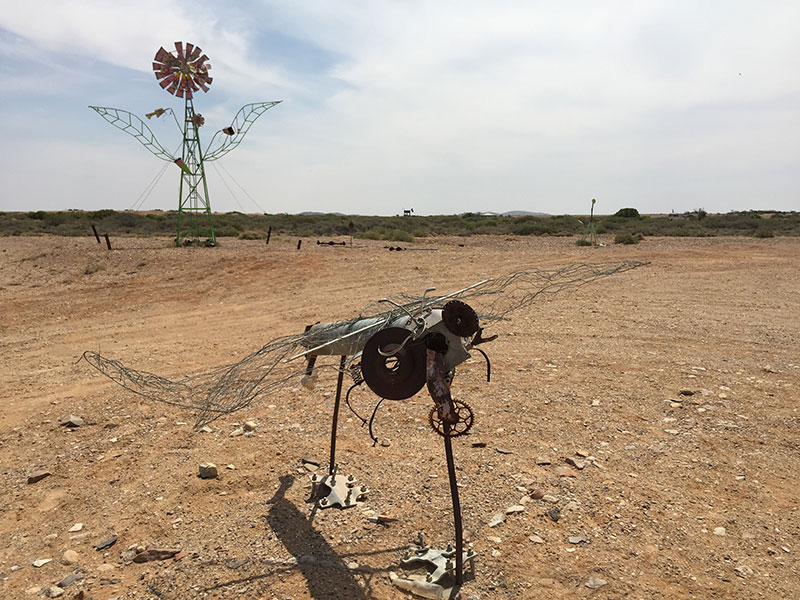 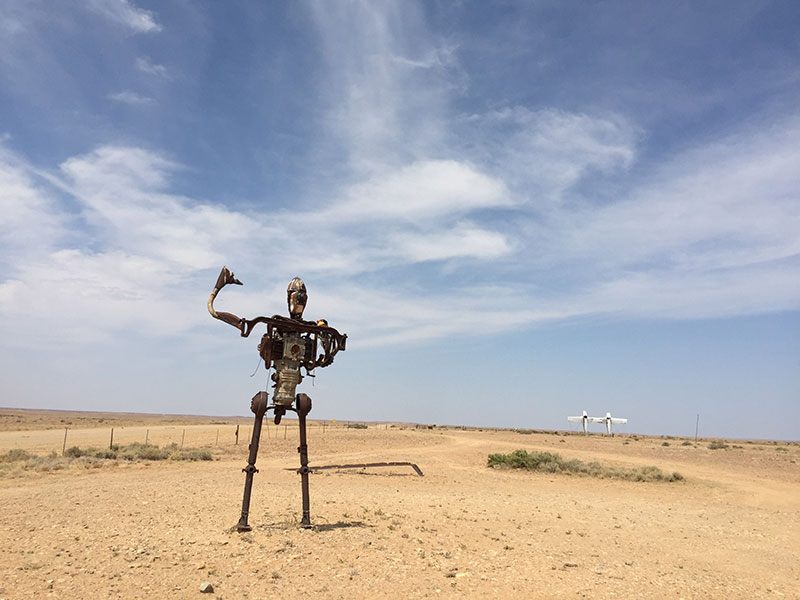 
Despite the night being cool, I managed to find a couple of new-to-me nocturnal gecko species on the roads near Marree. 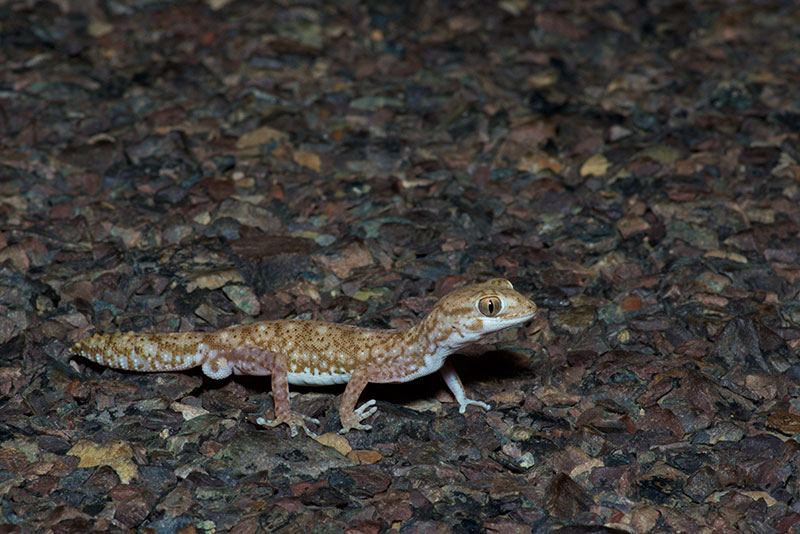 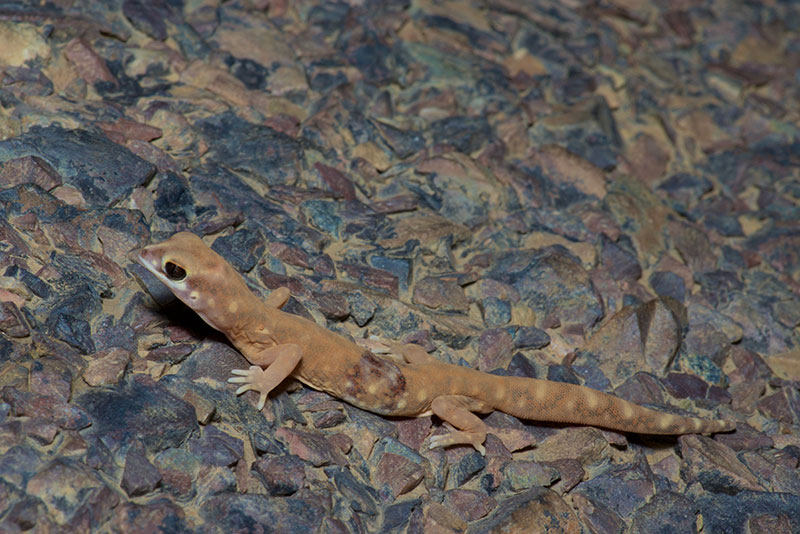 Eyre Basin Beaked Gecko (Rhynchoedura eyrensis). At first I thought this lizard had a large but shallow wound in its back, though its mobility seemed unimpaired. After studying my photos, I think the apparent wound is really just the only part of its body where much of the red dust has been rubbed off to reveal the pattern of its actual skin.


After my night in Marree, I turned southward and aimed for the Eyre peninsula. First thing in the morning I got my best look of the trip at a King Brown Snake. It was initially basking in the road, but soon crawled into the nearby scrub. It was definitely aware of my presence but didn't race off like some of the others I had seen. Perhaps it just wasn't yet warm enough to move quickly, or perhaps it just wasn't all that worried about me. This was probably the longest venomous snake I've personally seen in the wild, at least six feet of grumpy elapid. 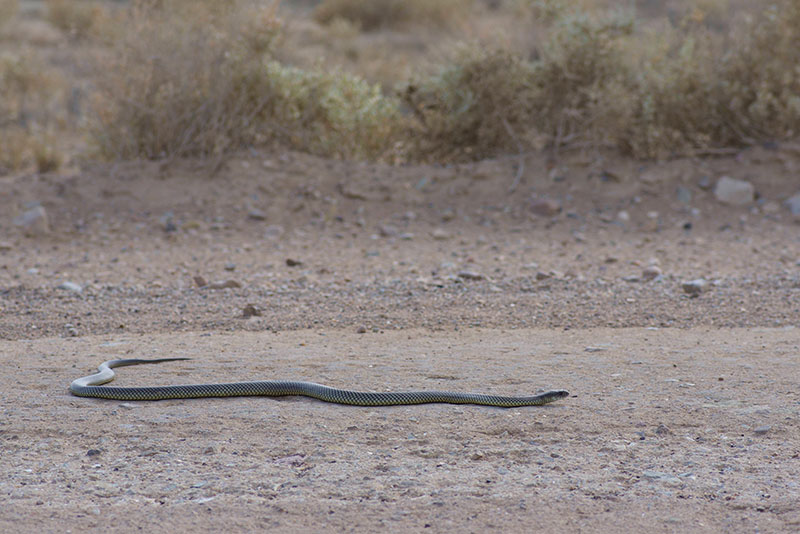 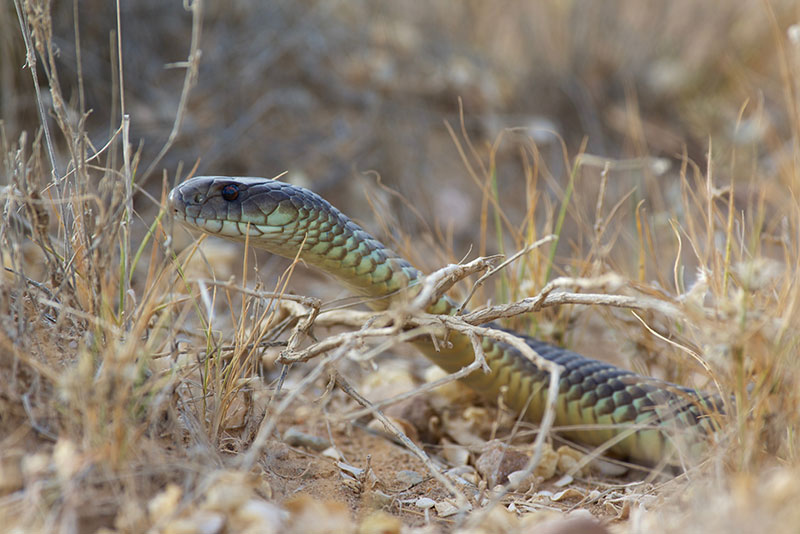 Same snake in the roadside scrub, keeping a watchful eye on me


That's it for Part 6. In Part 7 I'll be down in the northern Eyre Peninsula.

As always another great post John. I've really enjoyed your stuff. The brown snakes and thorny devils would be incredible to go find. You're definitely keeping the appetite going for me planning a trip down there.
Cheers,
Roki
Top

I'm enjoying your trip reports John. My favourite photos in this instalment are actually the sculptures and emu-sheep juxtaposition. Well done wallaby too.
Top

Thanks Roki! You can't go wrong with a herping trip to Australia.

Thanks Field Herper! Have you been out that way to see those sculptures? It was a wonderful thing to stumble upon in the middle of nowhere.

I've got relatives over for the holidays so part 7 is slower in coming. Should be up in a few days at most.

Wow, I have enjoyed all six chapters, looking forward to part seven. I'm loving all the lizards especially the geckos. Really puts the number of skinks Australia on display.
Thank you for sharing.
Nick
Top

Thanks a lot Nick. Of course I saw only a minuscule fraction of Australia's skinks, but it was still a lot of skinks.

Ribbit wrote:...Thanks Field Herper! Have you been out that way to see those sculptures? It was a wonderful thing to stumble upon in the middle of nowhere.
...
John

Cheers John. No, I haven't seen those sculptures before, but I'd like to see them one day. I'll keep an eye out for them.
Top

Just to let you know that the order or the accompanying descriptions for the images is out of sequence.
Top

Thanks for the heads up, Field Herper. I'm not seeing the problem at a glance though. Could you please give one or two specific examples? (I have occasionally seen a problem with mixed-up images when loading posts with lots of images on my iPhone. After reloading such a page, the problem has gone away. Maybe you are running into something similar, or maybe I just didn't look carefully enough, or maybe my captioning style is confusing.)

No worries mate. It's all good now. The sequence is back in order and there's nothing confusing about your captions. In fact your narrative is one of my favourites on the forums. Your appreciation/understanding of our sense of humour is a reflection of your travels down under. Welcome to country.
Top

Thanks for checking again, Field Herper, and I'm glad that the image sequence fixed itself. I blame web technologies!

The general sense of fun and good humor is one of the many excellent reasons to spend time in Australia. I'm sure I will be back again and again.

that Tympanocryptis looks like it has a pale band across the head, above the eyes- if so its likely T. lineata
Top

Eipper wrote:that Tympanocryptis looks like it has a pale band across the head, above the eyes- if so its likely T. lineata

Thanks Scott. Here's another photo of the same lizard from a better angle to see the top of its head. I don't see a pale band here, though there are some light-and-dark markings on the top of the head. What do you think? 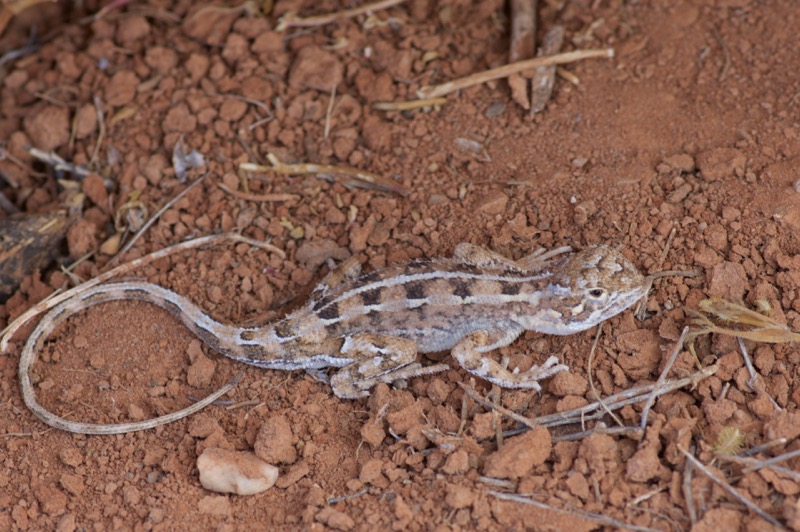 Kelly, agreed! I can see why all the parks that have Yellow-footed Rock Wallabies want to advertise that fact.