Here's Part 4 of my 8-part write-up for my month of October 2015 herping in Australia.

The rest of my month was spent in South Australia, an Australian state I had never before visited. I had chosen an itinerary that would go through a variety of habitats and also intersect thorny devil territory again, just in case I failed to find any in the Red Centre. 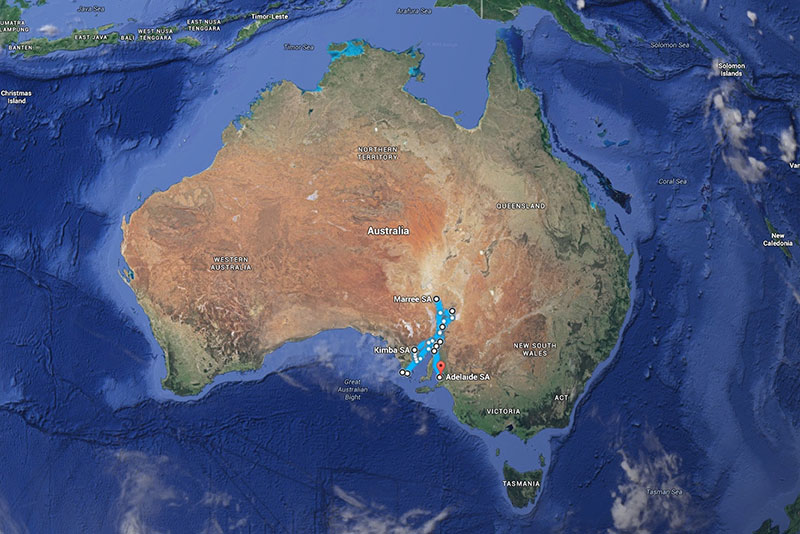 
Earlier on my trip everywhere had been unseasonably hot, but when I flew into Adelaide it was in the middle of a few days of unseasonable coldness. It was even raining when I arrived, though that was the last day I saw any rain on my trip. That gave me an opportunity to sleep in a little the following morning, since I was planning on a hike in the Adelaide area and there would be no point getting there when it was still too cold for any herps to bother being awake.

I arrived at Morialta Conservation Park for my morning wanderings at about 10:00. 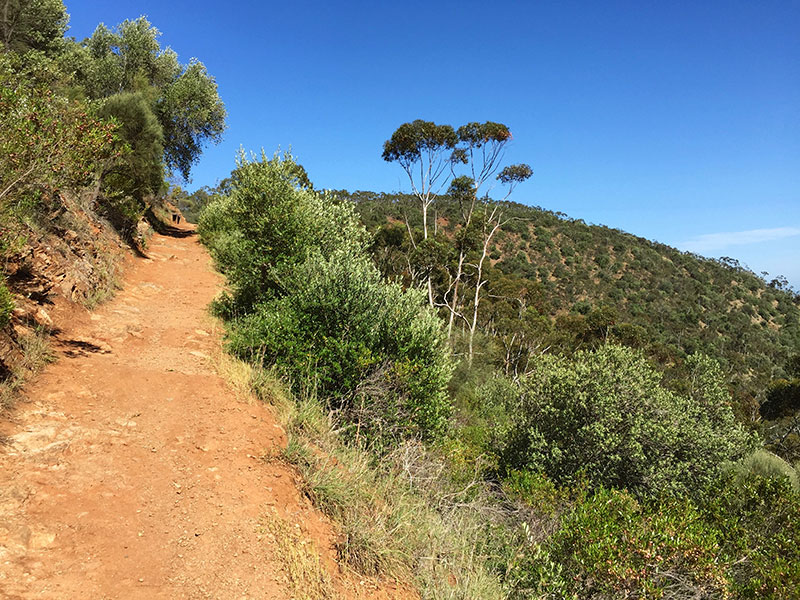 One of many trails at Morialta Conservation Park. The park covers hilly terrain, which is no doubt why it wasn't developed long ago like all the nearby flat land.

It was sunny but still cool, and probably most of the warmth-loving reptiles didn't become active until after I had moved on, but I found a few skinks. The first couple were Southern Earless Skinks, which have three toes on each limb and just depressions in their heads where the ear openings should really be. Observant readers will note that Part 1 included a skink called the Three-toed Skink because it has three toes on each limb, and so does this skink. This may lead observant readers to wonder why that other skink gets to be called Three-toed Skink and this one does not. The answer is quite simple: there are far too many skink species in Australia for them all to have sensible names. Southern Earless Skinks are in the category of skinks that are usually seen only if you look under things, and the ones I saw were indeed under things. 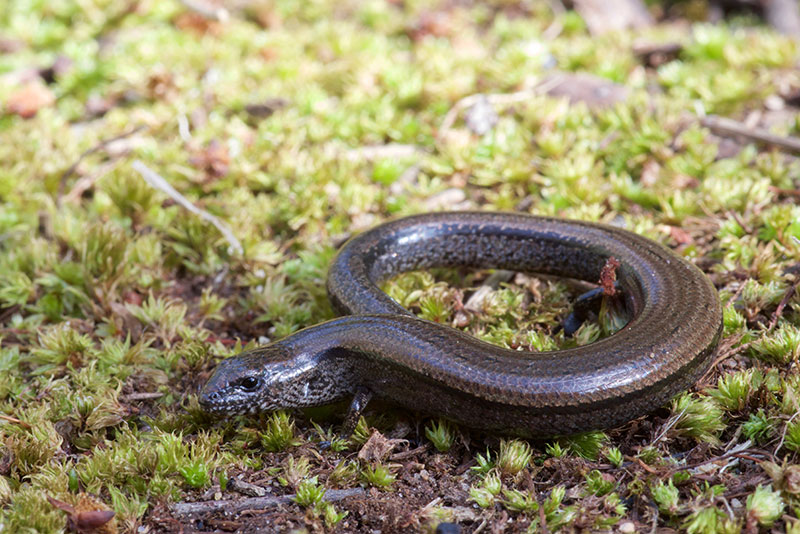 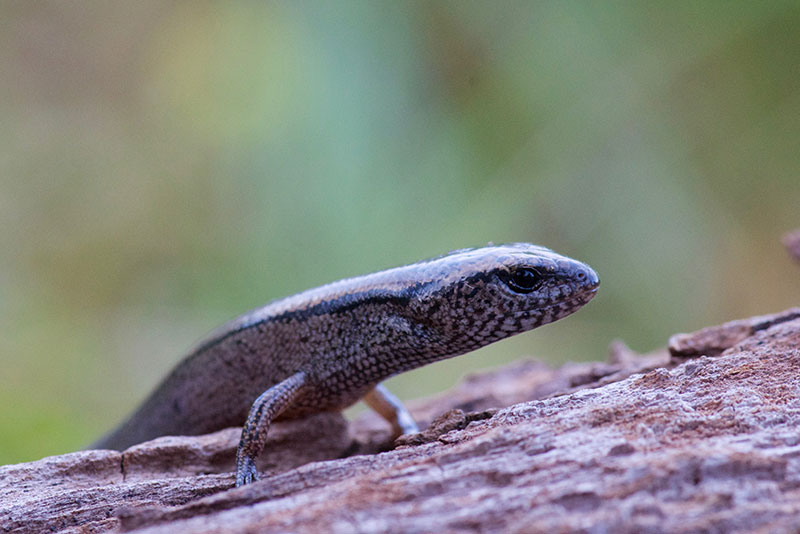 Close-up of a different individual, formerly under a log. These skinks had bright yellow underbellies. You will just have to take my word for it.


Grass Skinks, the same kind I had gotten only one crappy picture of back in Part 1, were out in some numbers. They were in the category of skinks that are always moving around out in the open. You don't have to look under anything to find them, though you might find even more if you do look under things. 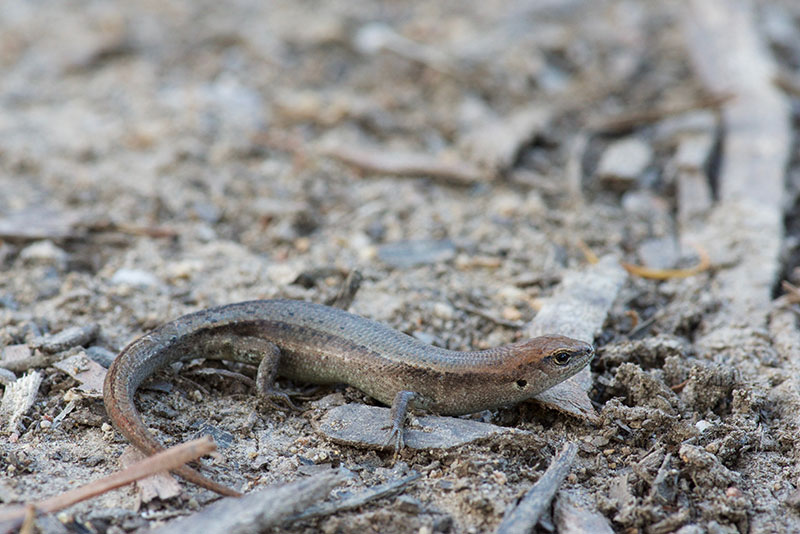 Non-crappy photo of Grass Skink (Lampropholis guichenoti), not recently under anything as far as I know


Just off the trail I spotted a basking Eastern Striped Skink. 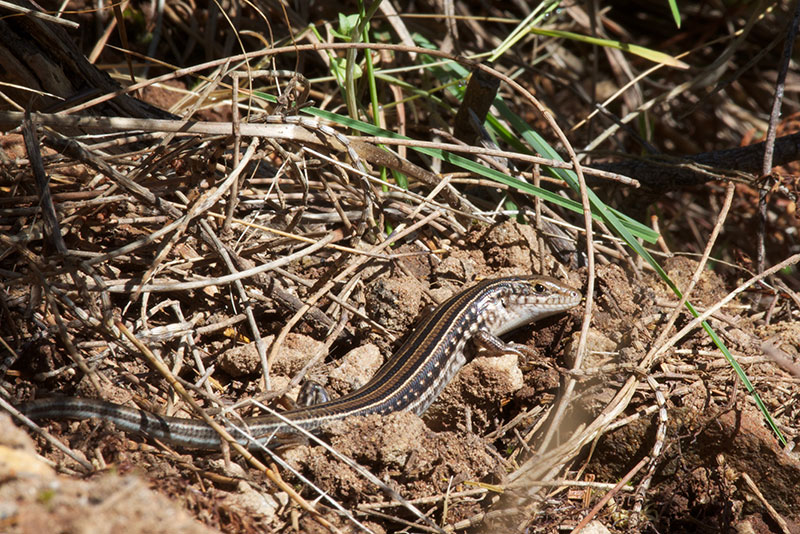 
That was my last type of lizard in Morialta Conservation Park. My next overnight destination was Port Pirie, about three hours north. About halfway there, I pulled over in some random rest stop to eat the lunch I had brought along, and there discovered another new-to-me skink species hanging out in the narrow strip between the rest area clearing and the highway. It is sometimes hard to avoid finding new skink species in Australia. 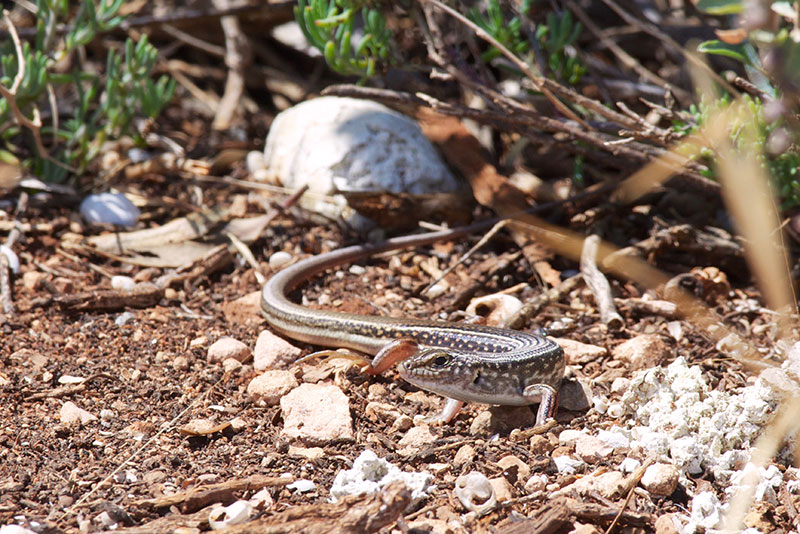 
Near Port Pirie I saw my first Shingleback of this trip. Ah, the Shingleback! The Stump-tailed Skink; the Boggi; the Bobtail; the Pinecone Lizard; the Sleepy Lizard; the Stumpy-tail. They are huge. They are slow. They are monogamous. They have curiously charming expressions. They will not hesitate to stick out their big blue tongues and look ferocious, but they are not at all ferocious; you can pick up the most ferocious-looking Shingleback and it will make no attempt to actually bite. I cannot believe that a more endearing lizard exists anywhere on Earth. 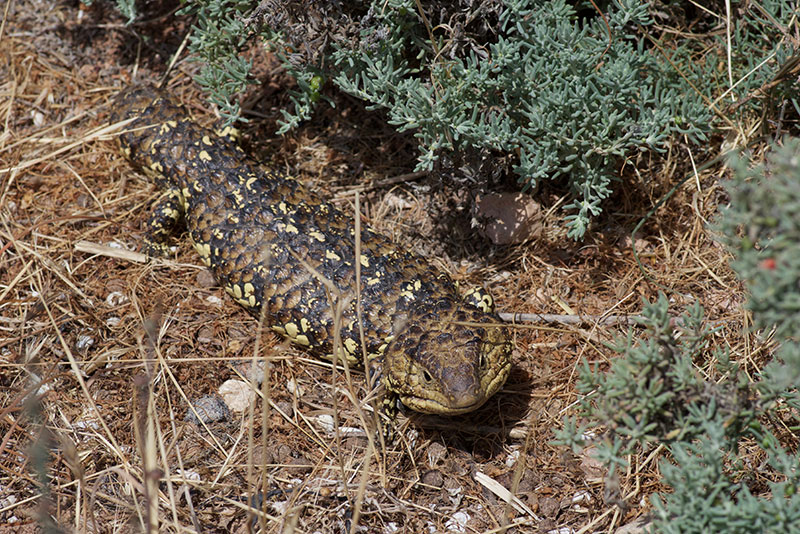 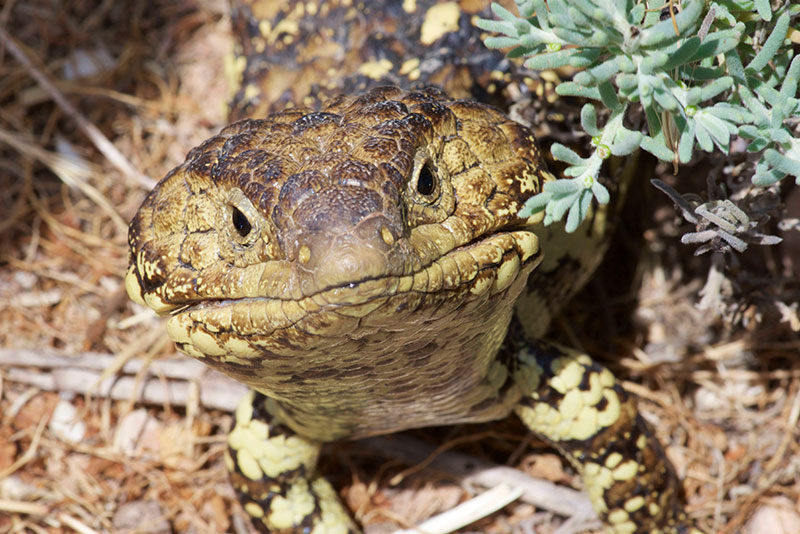 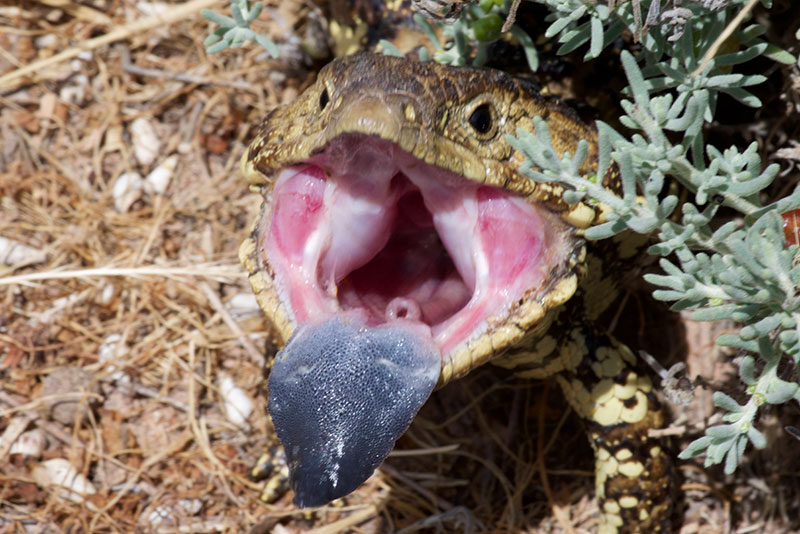 
A few minutes after I saw my first Shingleback of this trip, I saw my second Shingleback, and shortly thereafter I saw my third. It occurred to me that I might see a *lot* of Shinglebacks in South Australia, so I made a pact with myself to stop for every Shingleback and take at least one photograph. I will scatter more Shingleback sightings into my account here, but I've also put the complete set online elsewhere. For now, here's just one more photo. 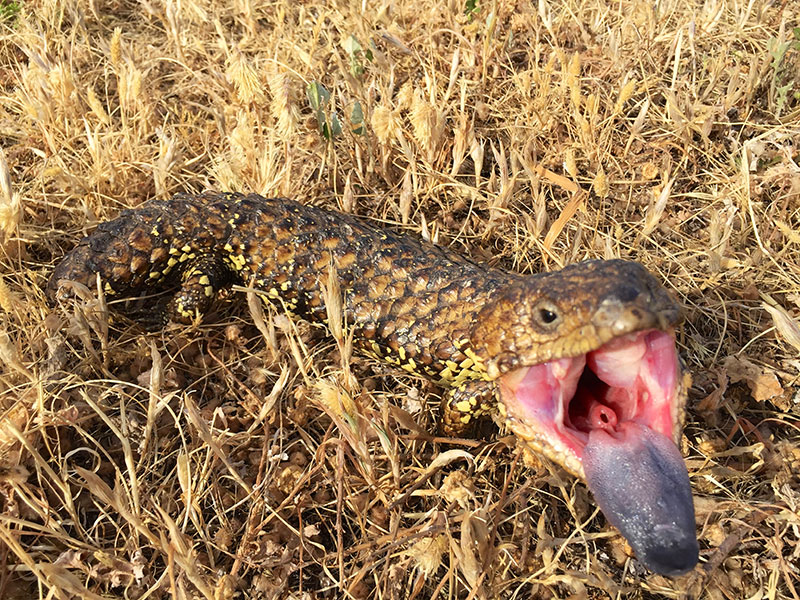 This was Shingleback #3, really trying hard to look scary


The next morning I went for a hike in Telowie Gorge Conservation Park, near the southern end of the Flinders Ranges. 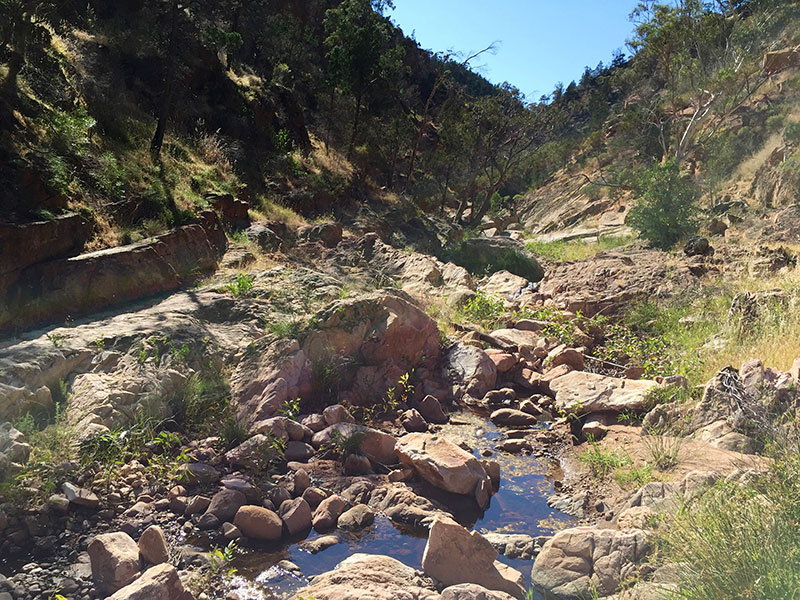 
Promotional materials like to brag about Telowie Gorge's colony of Yellow-footed Rock Wallabies (this seems to be true for every park that is home to Yellow-footed Rock Wallabies), but I saw no wallabies that morning. I did however get my first good look at the so-called Tree Skink. I ended up seeing many of these in various places, and the vast majority were on rocks, though a few were on downed logs. 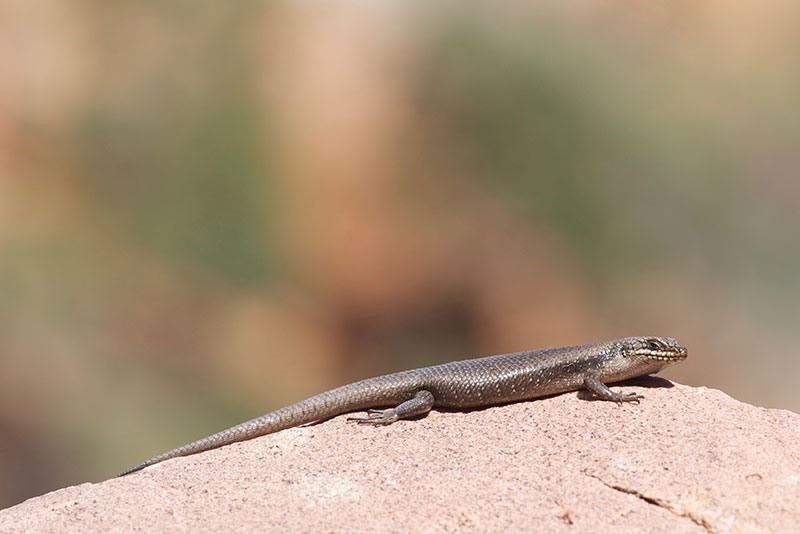 
Nearby I spotted my first of the many species of Ctenophorus in South Australia. Ctenophorus is a genus of agamids (usually called "dragons" in Australia) that always reminds me of Crotaphytidae, the collared lizards and leopard lizards of the U.S. and Mexico. Some Ctenophorus species are known as "rock dragons", and rule over rocky outcrops like collared lizards. Others are known as "ground dragons", chasing down their prey on mostly flat ground like leopard lizards. This first species I came across was the Tawny Dragon, one of the rock dragons. 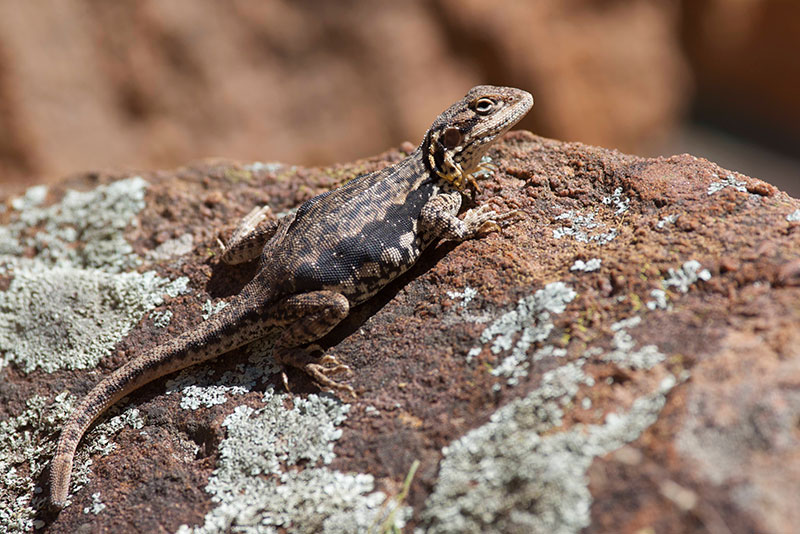 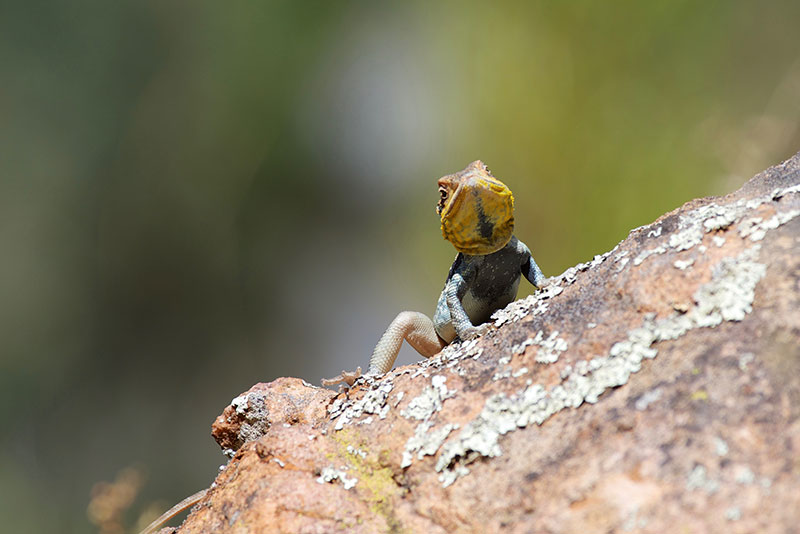 
The aforepictured creek was thick with tadpoles and small frogs. The frogs rested under creekside stones, and when uncovered would instantly bounce around until they found themselves in water, at which point they would swim down and try to bury themselves in muck. 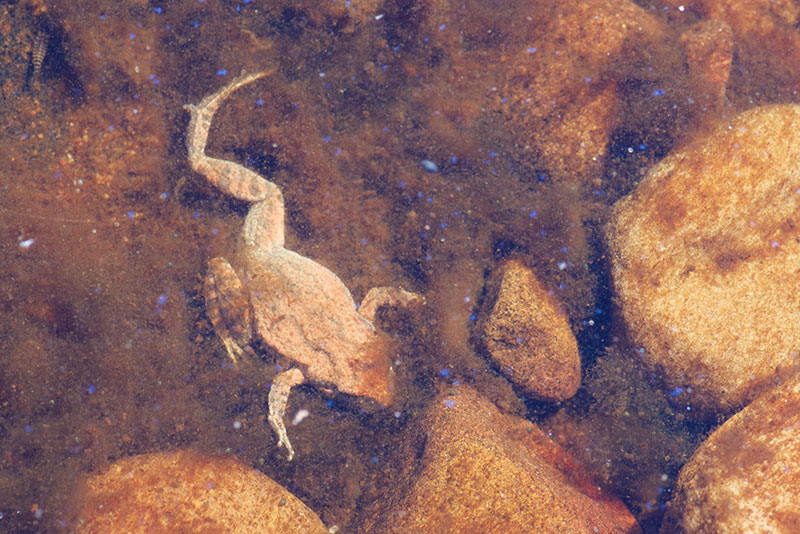 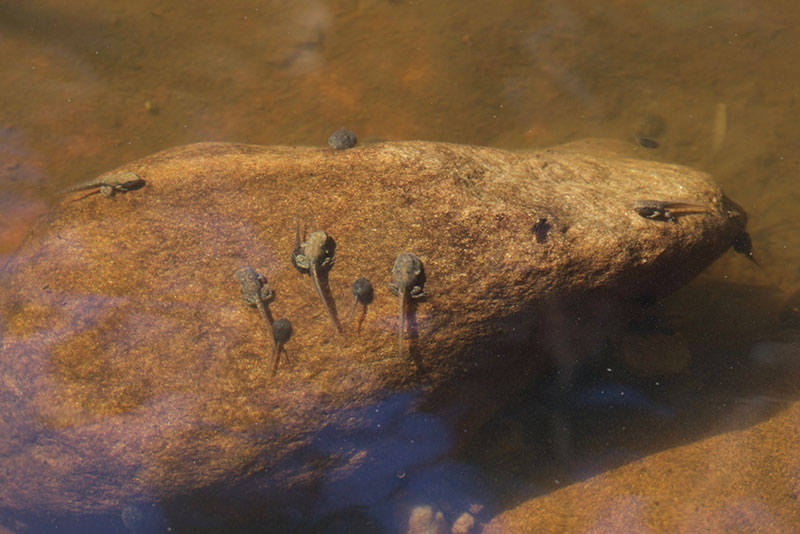 On the road toward Mt. Remarkable, I started seeing Central Bearded Dragons. Some of them were on high lookout spots, typically fenceposts, but sometimes tree snags. I would slow the car down to try to approach for a photo, but they were easily spooked and would run into a hole or other hiding place. Sometimes they would just hunker down really low, like this one that was atop a snag perhaps twenty feet high: 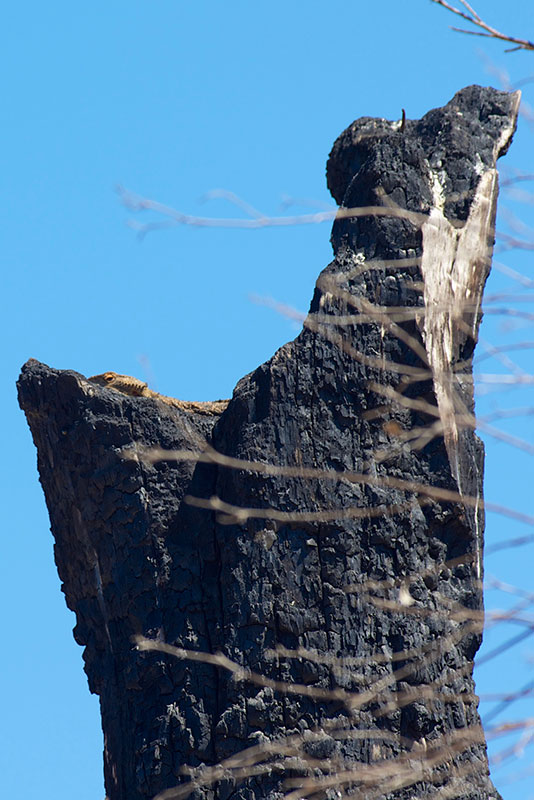 
Other beardies were soaking up the sun in the middle of the road, usually with their heads and tails elevated. 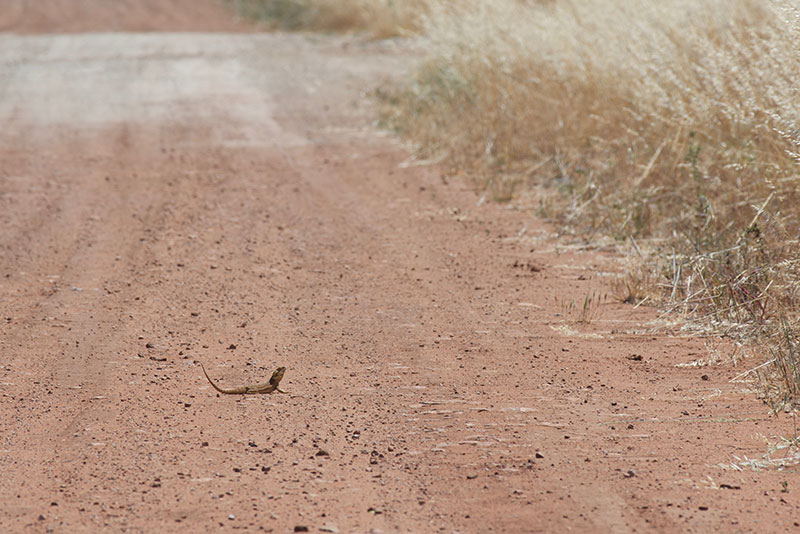 Typical initial view of a Central Bearded Dragon from the car


Most of the road beardies would bolt into the bush before I could get close, but occasionally one would hold its position. 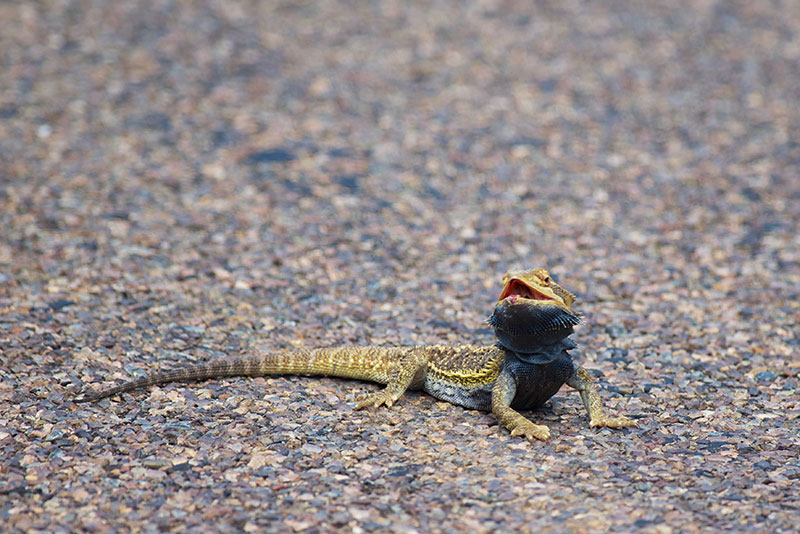 This colorful individual held its ground while I parked nearby and approached it, and continued to hold its ground when another vehicle passed right over it. It acted untouched (and ran off soon after I took this photo), though it has a bit of blood on the tip of its snout.


I did hike in Mt. Remarkable in the afternoon, but didn't take any photos worth including here. I won't make the obvious joke, though it is so tempting. That night I visited a different part of Mt. Remarkable National Park after dark. The evening was cool, and my expectations were low. The only herp I spotted on my night hike was a new-to-me gecko. 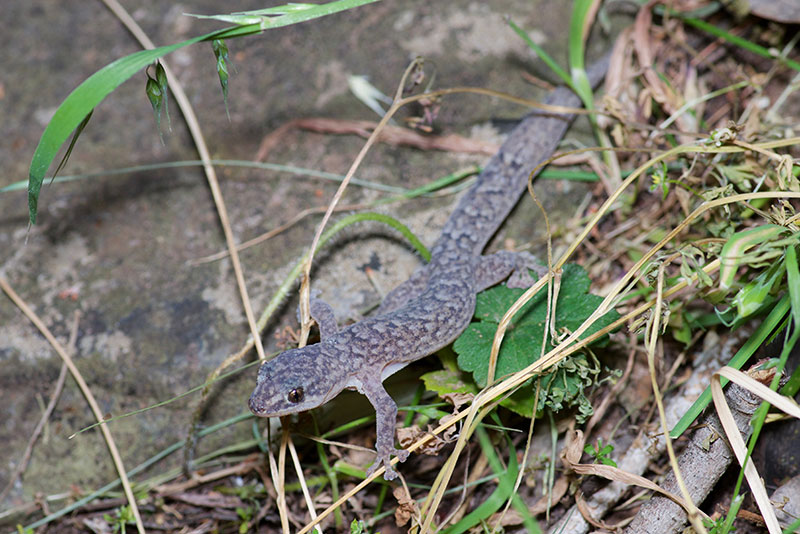 Marbled Gecko (Christinus marmoratus), not to be confused with the Marbled Velvet Gecko I saw back in Part 3


On the way back, my eye caught a glimpse of one of those slithery shapes that always bring warmth to a herper's cold cold heart. It was just a little guy, maybe eight inches long, trying its hardest to get off the open road and into the adjacent vegetation. I used a small stick to block its way a few times so it would stop moving long enough for me to get photos. I didn't yet know what kind of snake it was, but in Australia you have to assume that any unknown snake is dangerously venomous. This one turned out to be my first (and so far only) Tiger Snake, a name I cannot read without hearing it pronounced by an excited Steve Irwin's voice in my head. Danger, danger, danger! The Tiger Snakes in this northern tip of their range are in general quite a bit smaller than the ones closer to the coast, but this one's tininess could no doubt be attributed simply to its extreme youth. 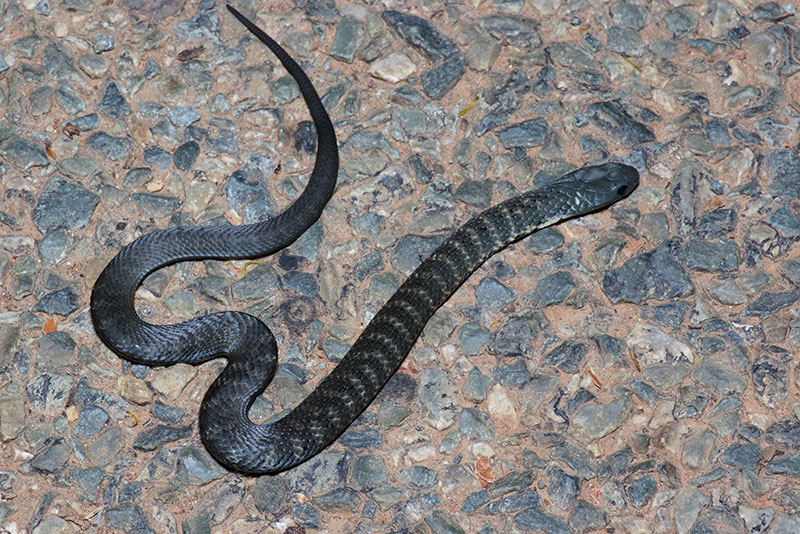 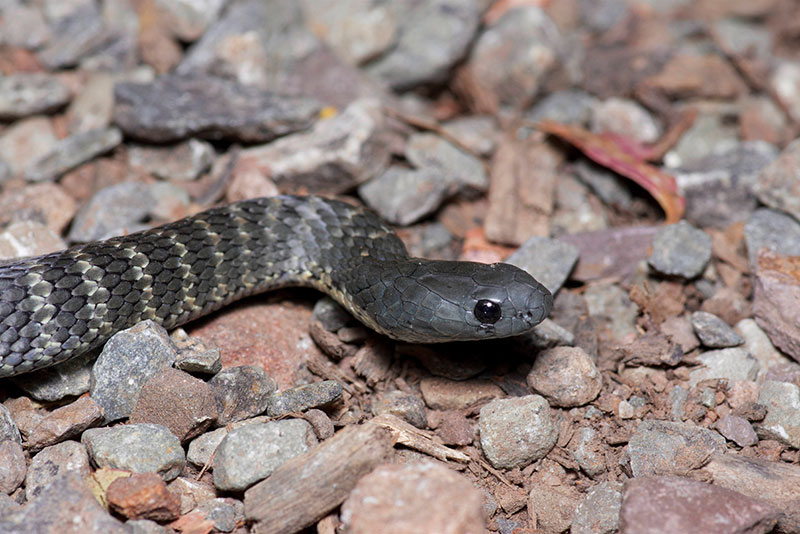 
The next day I drove from Melrose to the wonderfully named Wilpena Pound in Flinders Ranges National Park, where I stayed for a few days and saw many fine things that will have to wait until Part 5. One last goodie on my way north was another of Australia's dangerous elapids, the Eastern Brown Snake. This one was motionless when I first saw it, but got worried after I stopped my car and approached it. It decided to slither off the road toward me, which was helpful for photography but a teeny bit unnerving. 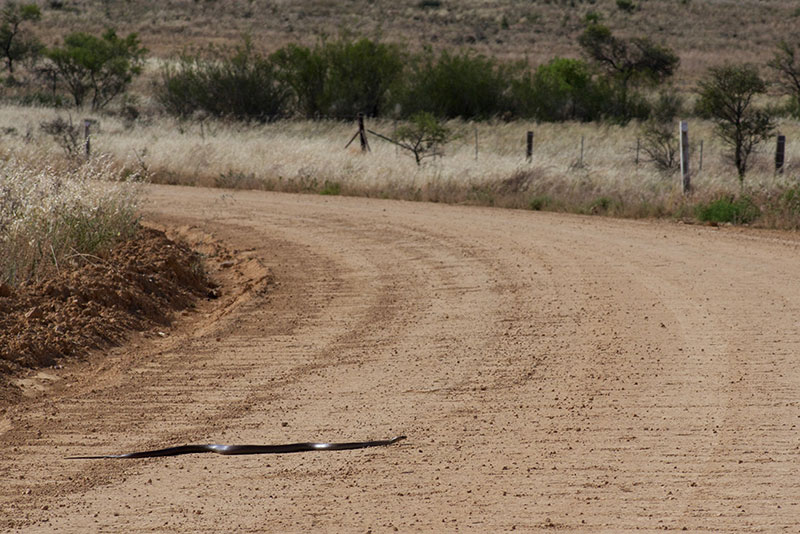 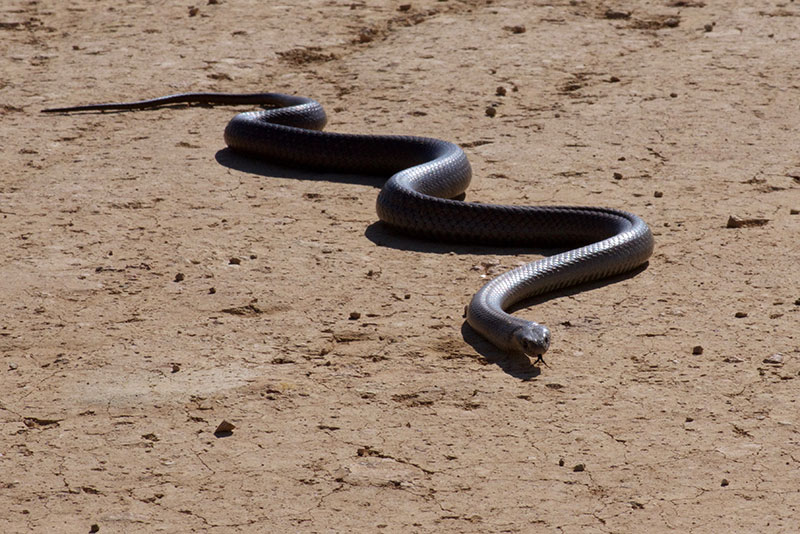 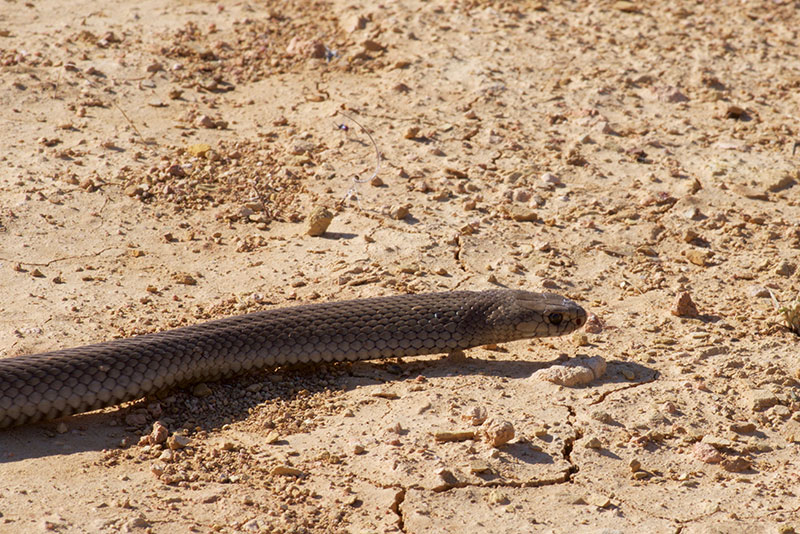 This might be a good time to note that a lot of Australian herps can be difficult to tell apart. I did my best to study multiple books and online references to get the IDs right, but it wouldn't be surprising if I messed some of them up. If you suspect that I misidentified anything, please do let me know.

That's it for Part 4. Part 5 will feature the most beautiful lizard from my trip, many macropods, and more.
Top

This has been a great series so far. Looking forward to the next installments.
Top

Thanks for posting these accounts of your travels in Oz John. They're well documented with pics and a sense of humour that is an understated essential for travelling down under.
Top

Thanks Patrick. Australia is full of such unusual creatures and place names, and such cheerful people, that a sense of humor is practically unavoidable.

Loving this series - many, many thanks for sharing.
Top