Just got back from a brief field herping trip / some birding in Gamboa and El Valle / El Cope' Panama. Most of the trip was a great success, and we were able to come away with our target photographed species - Bothriechis schlegelii

You can view all the images at www.pbase.com/codyconway/panama

In Gamboa, we only had one night in the canal district. We went out that night, after some serious jetlag for my partner who flew in from Germany, and wanted to try and track down some species. We first came across the typical gecko species found in the area (invasive house geckos), and then came across the common local, the Yellow head Gecko - Gonatodes albogularis next we went down to the water treatement ponds in hopes of finding amphibians and caiman, sure enough, the Red-eyed Tree Frogs, iconic for the tropical rainforest were present . . . Aside from a DOR colubrid, the night straggled out from here, so we headed in.

The next day we moved to El Valle, stopping by the El Chocco to look for poison dart frogs at the ponds we came across Anolis frenatus, Soon we finished the drive to El Valle and hooked up with Mario from the serpentarium. He took us to Cerro Gatail to search for the Eyelash viper that evening. First find of the night was a Salamander, Bolitoglossa schisodactyla Then we encounted a neotropical racer juvenile up a tree . . . Followed by a segment of nothing, till we finally stumbled across the goal species - Bothriechis schlegelii, while mario was fixated on a cricket for his gecko colony back at his facility, I was fortunate enough to spot this small male situated in the lower side of the trail . . . After that excitement, we continued to the top of the trail for a nice view of the city before hiking back down. On the way down we encountered the next species on my list to find, and another unique snake to the rainforest, Snail-eating Snake (Dipsas sp.) Wrappin up our first day in El Valle, we headed in . . . More to come.
Top

Love that area of Panama and Mario is always a helpful guide! Can't wait for the rest.
Top

So far so good.. looking forward to the rest!
Top

Spectacular. The schlegeli is cool I guess, but the photos of the Anole and Bolitoglossa made the post!

I checked out the other photos on your pbase gallery. Amazing series of photos.

FYI, and if you care, the Capybaras there (Ammo Dump Ponds?) are actually Lesser Capybara (Hydrochoerus isthmius). It is a different species than the more famous southern species, Hydrochoerus hydrochaeris. I just learned that two days ago and was surprised by it.
Top

We only had Mario for our first and second night in Panama, so this time we set out to find other species, and went to areas specific for Fer-de-lance, and potential bushmaster (Mario said, even though rare in El Valle, there is one spot that has turned up bushmaters on occasion for a few people. This was also a good spot for various lizard sp. and as it turned out . . . Glass Frogs.

Glass frogs, another icon of the rainforest were on top of the priority list, along with the eyelash viper we had already accomplished. With a few shots in mind, we were hopeful, but not expecting to find our target species. However, after searching for vipers for about 45 minutes, Mario starts yelling through the jungle "GLASS FROG" and our first turn of the night was a really nice Male Emerald Glass Frog, Centrolenella prosoblepon, we took some shots in the field on location, then with Mario's approval and authority, we were able to take the frog back to shoot location in El Valle, to do more controlled photographs for the belly shot (The frog was released on the same leaf it was located roughly 24 hours later) . . . 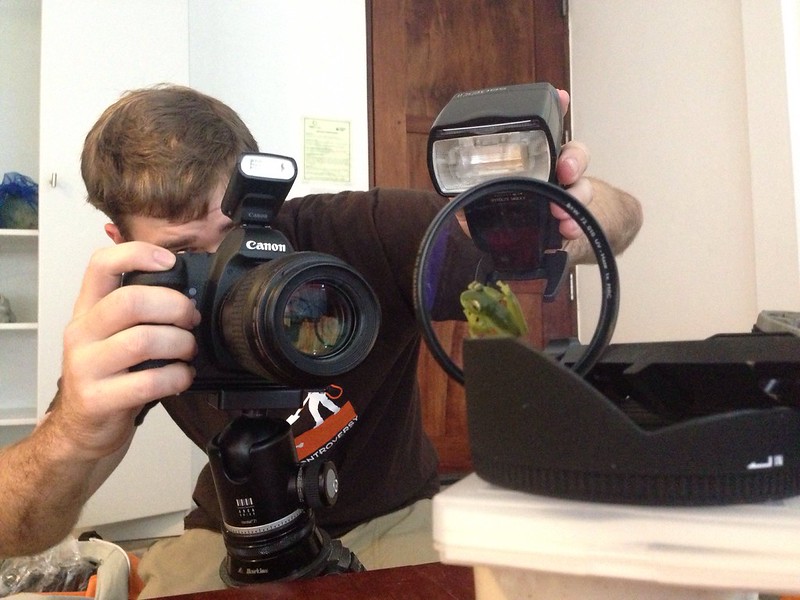 This was our setup back at the lodging. Using a B+W MRC UV / Haze filter, we fixed the filter using a flash bracket to hold it, and a lens hood reversed to hold the bracket. This made for an EXTREMELY stable shooting platform, and allowed us to use a tripod to lock onto the exact spot needed. Next was taking a series of shots using different lighting angles. This allowed for different levels of penetration on the actual subject. Then, in Photoshop CS6, we were able to use focus stacking and HDR techniques to compose the levels of highlights properly and create the final image after about 5 hours of total work . . . and a couple shots on location, one showing VERY well that it's a male with its blue hanging appendages . . . Going back up to Cerro Gatail, to look on the other side of the mountain for Bothrops, we encountered extreme fog, and no luck, aside from not one but two Tityus pachyurus, the deadliest scorpion species in Central America, Mario used pliers and collected this to bring back for venom extraction to be used in Anti-venom for this species. Reaching the other side of the mountain, we made it back to where we had success the prior night with the Eyelash and Snail Eater. Sure enough, up near the top of a tree we found another Snail Eater, this time it was a hatchling We found a few more Salamanders of the same species as the prior night, Bolitoglossa schisodactyla, as well as a Crested Iguana, Corytophanes cristatus Heading back down the mountain, was little to show. We did manage to find a few more frogs, but nothing of worth noting.

- Thanks for the update on the Capybara chris! It was my understanding this was the same species as the big brother down in the amazon, just an isolated colony of them. These were photographed at the resort pond in Gamboa, not at the actual ammo dumps, though we did manage one there as well.
Top
Post Reply
6 posts • Page 1 of 1