More from the Sonoran

More from the Sonoran

Since my last post, viewtopic.php?f=2&t=10706, I’ve managed to come across a few more critters, but I’ve had to work for them. I’m starting to realize why herpers in the southwest do so much road hunting; herps can be tough to find when you take flipping out of the equation. Don’t misunderstand, I’m not complaining, I’m having a blast hiking around and exploring the desert, but I’m certainly putting in a lot of miles per each encounter. 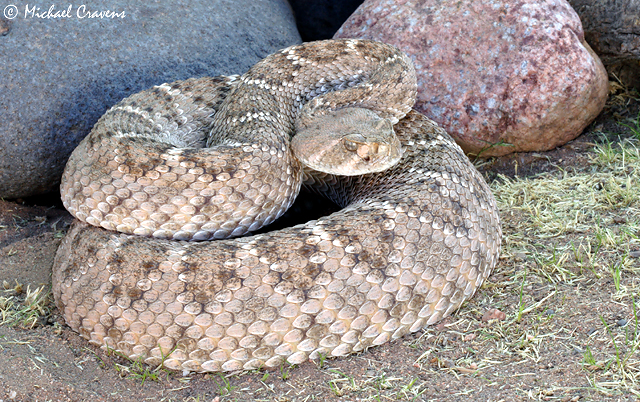 To start with, diamondbacks have been by far the most encountered snake. I’ve seen six over the last couple of weeks. 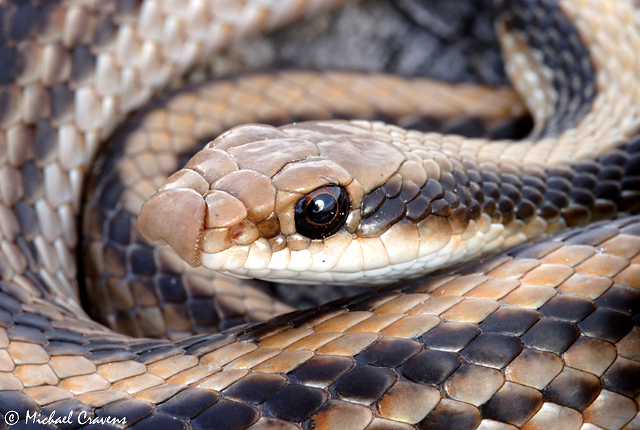 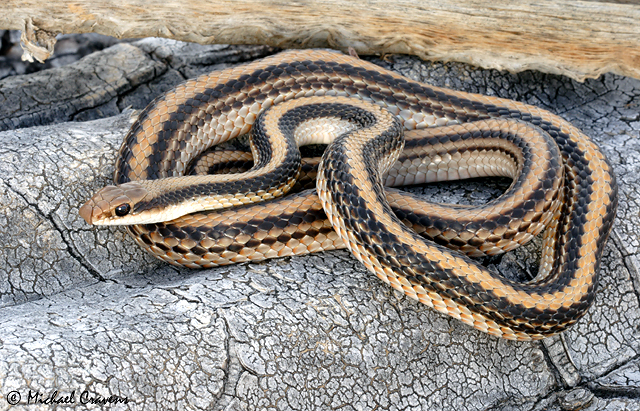 Since I didn’t get to photograph the last desert patch-nose I saw, I was happy to find another while I had my camera. 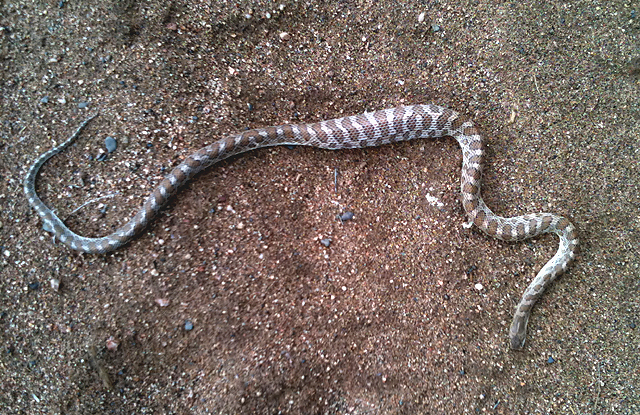 This DOR glossy was a heart breaker. I took a look and confirmed that the bolus was a Botta's pocket gopher. While poking around some talus, I was lucky to run across these petroglyphs... 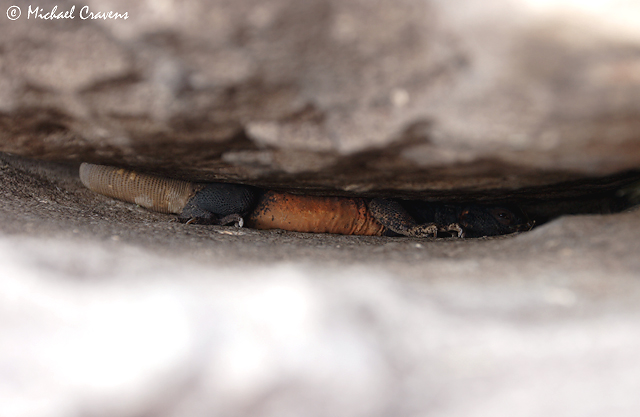 …as well as a few of these chucks. 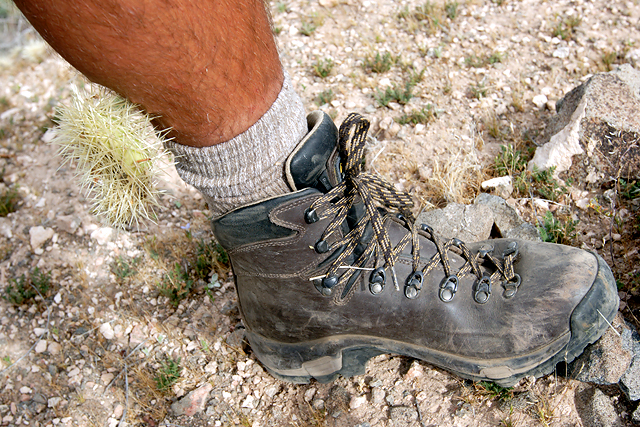 Cholla are certainly the nastiest part of herping here. This sort of evil is something you must experience to appreciate. 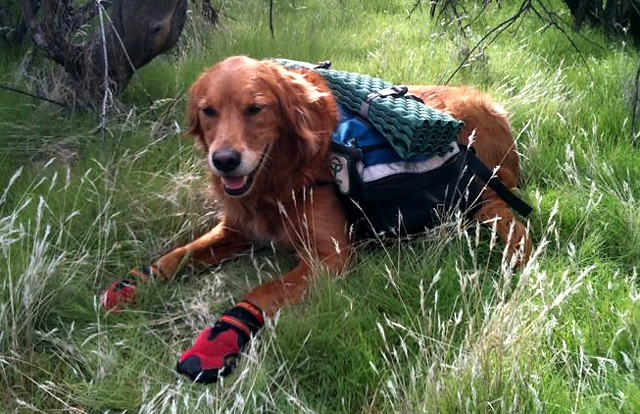 Quinn has hiked the entire state of New Mexico, south to north, so he's no nube to the desert. That being said, I don't think he appreciates it as much as I do. 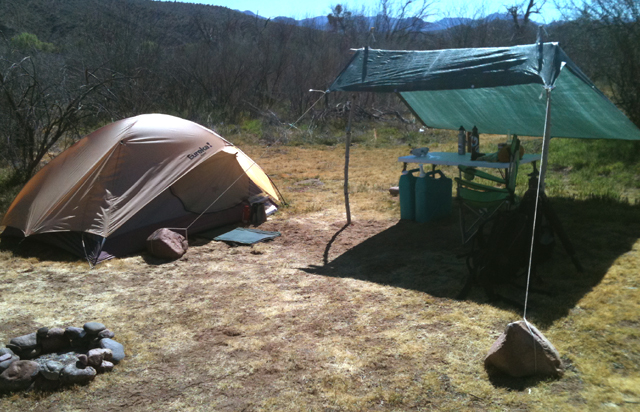 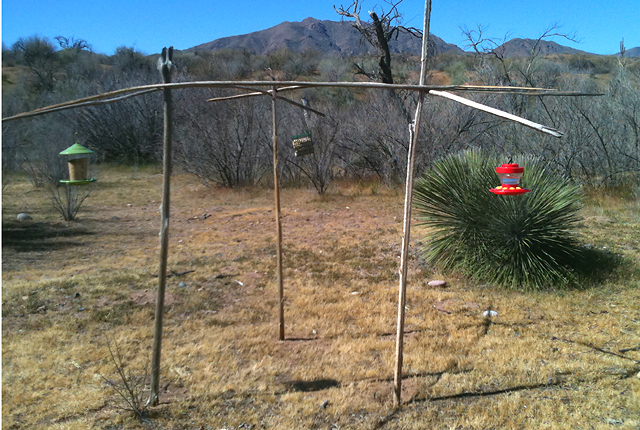 My bird feeding station at my camp that I built from saguaro cactus ribs. 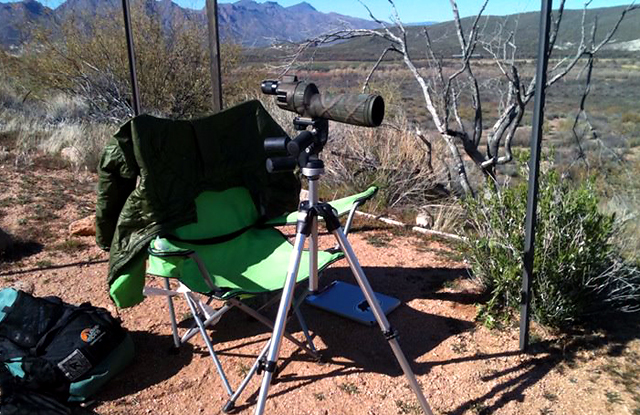 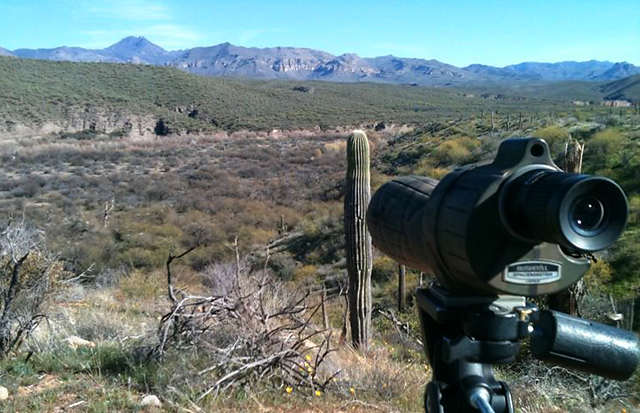 The view from my office...My nest is down in the Mesquite bosque below where I'm lucky enough to be keeping tabs on two healthy and quickly growing bald eagle nestlings. 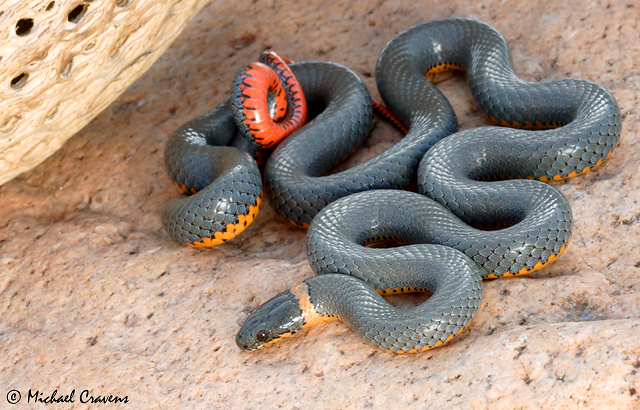 This regal ring-neck was an exciting find for me. 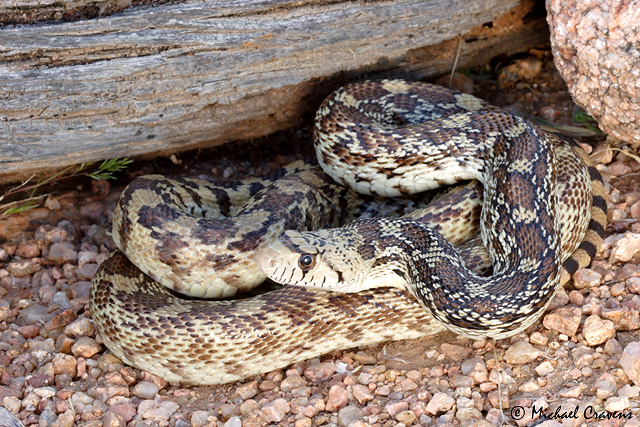 This gopher snake was nice to see out on the crawl. 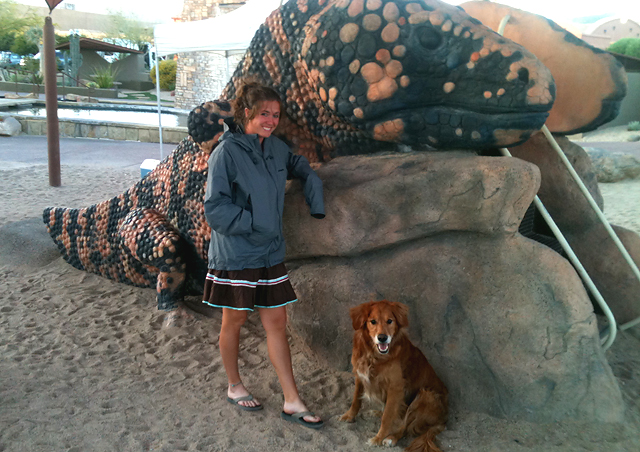 Mary, Quinn, and a giant Gila monster. For those of you that know Quinn, check out that white nose. He'll be eight this June. 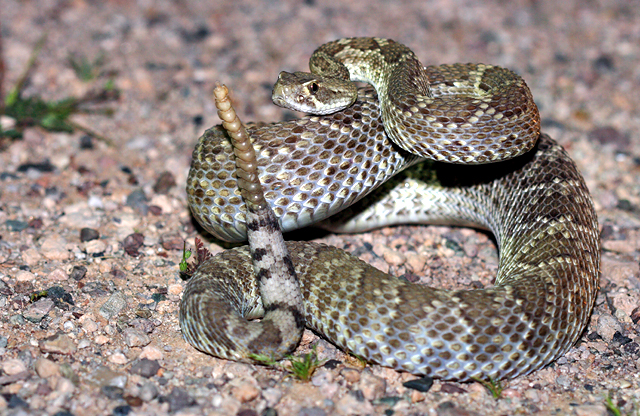 While I do enjoy every atrox I see, if I wanted to only see atrox would have moved to Texas. To break this run of atrox luck, Mary and I did some road hunting on one of my days off and scored a couple lifer Mohave rattlesnakes. Thanks Joshua Jones! 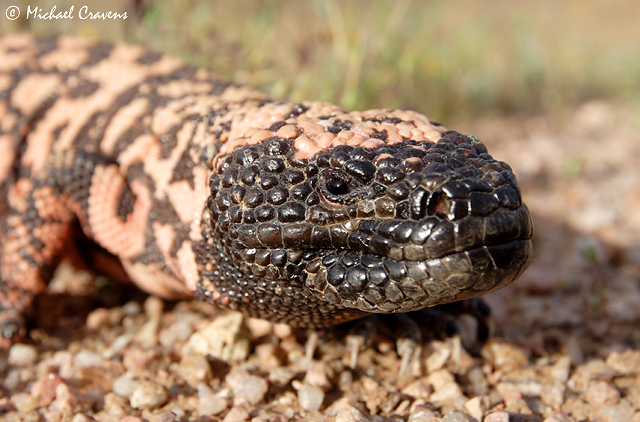 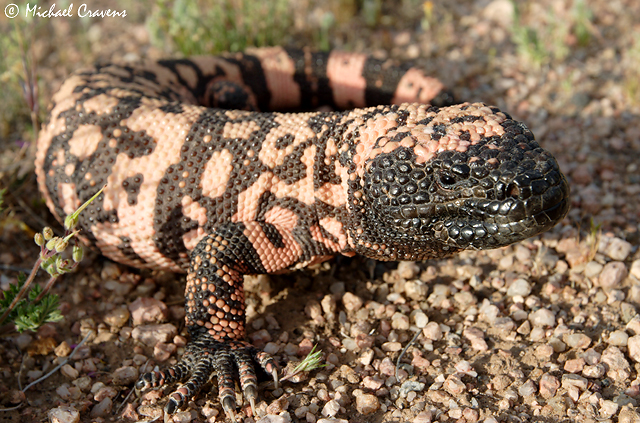 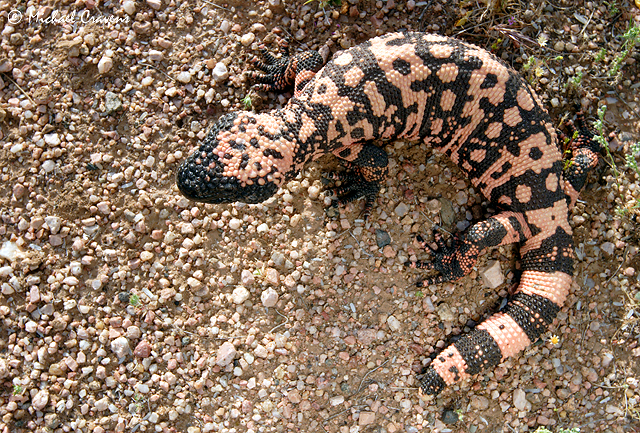 In ending, if I die tomorrow, I’ll die a happy man because I finally saw a gila monster!

I enjoyed the post Michael, congratulations on the Salvadora, and Heloderma. The full body shot of the Salvadora I really like.
I'm green w/ envy over your office, and camp.

Hey have you been wearing your toe gloves on any of those hikes? Cholla might be kinda mean on those sissy socks.

Thanks Dell, and no, I wont be wearing any of those "sissy socks" while tromping around out here. Although, I still think they have their place. While I'm sure tennis shoes would do just fine, I really appreciate a full leather boot.

Nice post mike. My chocolate lab grady is turning 14, he's got white face and feet now. Hard to understand how much you can love a dog till you spend that much time with it. Always enjoy your posts...especially this one!
Top

Thank you Mulebrother. Agreed, Quinn is bff, life is better with a good dog. Does Grady still get out in the field with you at all?

I loved all the pics, but I miss my boy Quinn. I'll have to get down that way and give him treats when you're not looking.
Top

Nice job and photography! For some species, road cruising is almost necessary. But I would take hiking over road cruising almost any day. There are only a few species I try to cruise for each year. Keep up the good work
Top

Thank you all for the comments!

Justin, you need to come for a visit. Otherwise, I'll try and make it home for the big NAFHA meeting.

Norman, where are you located?

Kenny, you should come out sometime. I'd love to get some field time in with someone who knows the area well. Besides, I've heard you're a good guy.

Nice photos of some of the locals. I prefer to herp by foot over road cruising. It's muh more rewarding and the best herping spots usually don't have roads.
Keep the photos coming!!!
Top

Thank you Will. I just visited your website, very nice images. Lets get out and shoot sometime.

Nice pics, Mike. I love the view from your office. Mine has a lovely freeway nearby. Those cholla are special plants.

Great stuff, and a big ditto on your comments about desert herping being very different and tough compared to eastern herping in many ways. This kind of fieldherping definitely burns off a few more calories than behind the wheel roadcruising, which is a welcome change in my case.

Hey, Mike, we haven't had a chance to get together out in AZ yet, but there's an event this Sunday that, if you're around, might fit nicely into the fun of spring fieldherping. Dave Weber has organized an ongoing NAFHA field herp survey of the Sonoran Mountain Preserve in the McDowell Mts. on the north-northeast side of Phoenix / Scottsdale. The next one (and 4th one that I'll have attended so far) is this Sunday (April 15th). We're meeting at 10am for the hike, which will probably run roughly 4 - 5 hours (but who knows exactly???). If you, or anyone else reading this is interested, pm me for the details about where to meet. It'll be a pure see & photo event, no collecting.
Top