A lot of field herpers seem to go fishing, or maintain aquariums, as much as they do herp! Any and all things fish are welcome in this forum.

So yesterday I was fishing on a pay to fish pier right off the OCMD boardwalk. Nobody was catching anything other than small spot and skates. I had been there for about 4 hours, and was considering packing up, when suddenly something started ripping line off my reel. I ended up spending about 5 minutes fighting it, which might not be much to people used to catching sharks or tuna, but for a Pennsylvania kid used to catching sunnies and trout, this was like trying to reel in a whale. It ended up being the biggest fish I've ever caught. For scale, I'm about six feet tall. 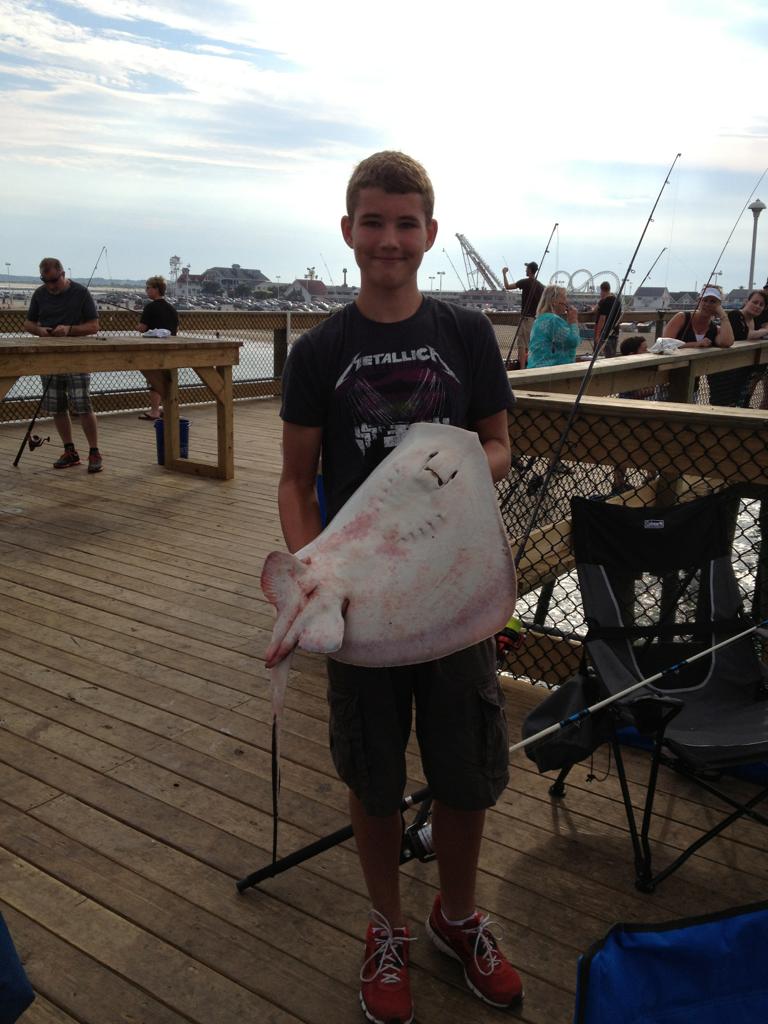 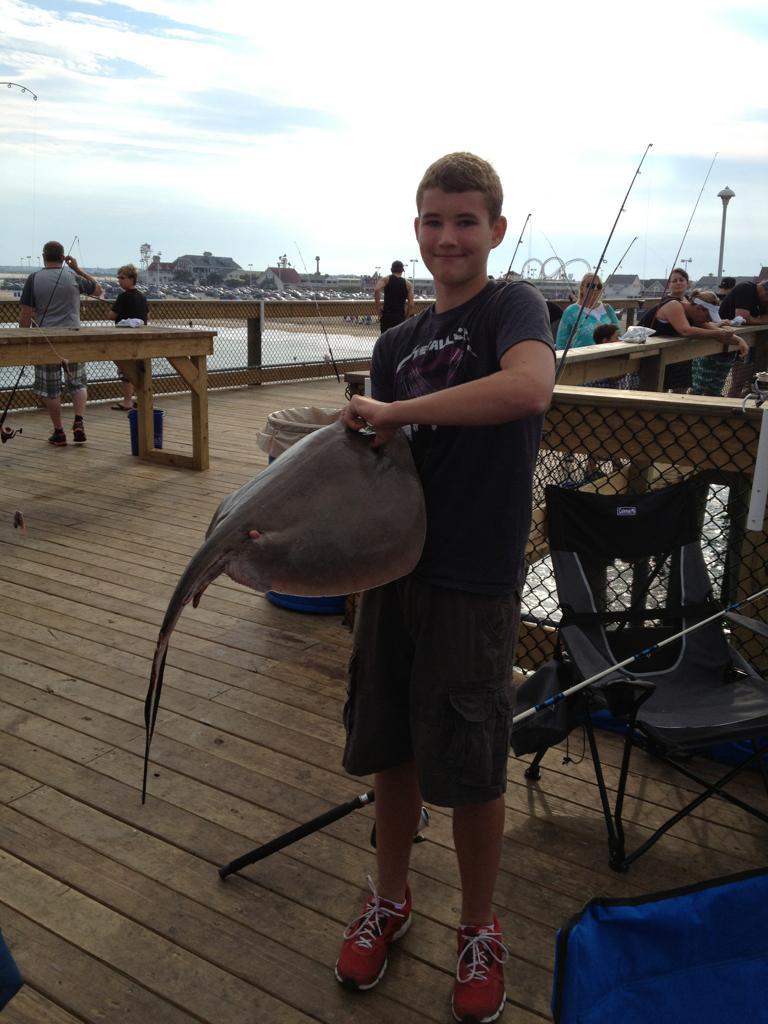 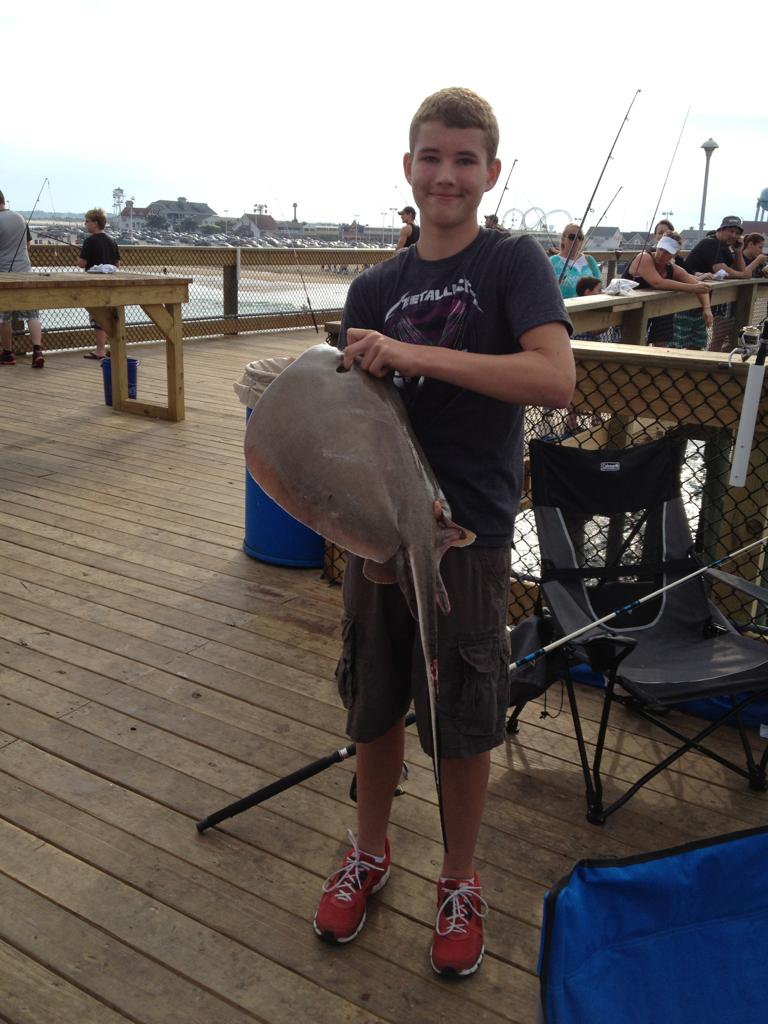 Anyway, I was wondering if people ever specifically targeted stingrays in coastal waters. This one put up way more of a fight than any other saltwater fish I've ever hooked. Also is there any good way to release one from a pier? When I dropped this one over the side it ended up doing a perfect belly flop that sounded like a fire cracker. While it swam back down to the bottom, I can't imagine it made it unscathed.
Top

I'm not a fisherman, but I can imagine the thrill of hauling that thing up!
Top

Jake, congratulations on an unusual catch you will long remember. I have caught quite a few, including truly large ones, and like you, it was awkward releasing them. In California, someone usually has a hoop type crab net available when pier fishing, maybe these typically lethargic (out of water) beasts could be gently lowered down to freedom? Whatever you did to release it is better than the fate of many caught by pier fishers, who sometimes leave hapless marine oddities gasping in the summer sun. Belly flopping might not be as bad as it sounds, it is common to see schools of mobulas (think small manta ray) jumping and somersaulting in unison and landing with the loud noise you described. Nobody seems to know why, but it is a fun to watch and common event in tropic Pacific water.

Hope you are cautious with the rays tail end, a sting is profoundly painful I am told.

I had a lot of fun adventures on piers, I am happy to hear they are still happening.
Vic
Top

Jake, I targeted Rays specifically a couple million years or so ago. I was just starting to use fly gear in salt water, had no idea how to find (much less hook) Bonefish so I spent many outings casting my flies across Ray backs and coming tight. This may or may not have helped me become accustomed to strong "fish" on my new tackle but it certainly "sprung" a bunch of spools on the Pflueger Medalists and Valentine reels I used back then...it wasn't long before I had a whole shoebox full of completely useless gear. A few years later I (sort of) got the hang of catching Bonefish, upgraded my gear a bit and donated the box to the local Boy scouts...they probably sold them as scrap metal.

Nice job on your biggest catch!

PS: I'm not so sure holding them by the eye sockets is a good thing to do if you are planning on releasing them. (It might be better to simply cut the line near the critter and kick it back over the side...the hook will prob rust out in the saltwater.)
Top

VICtort wrote:Whatever you did to release it is better than the fate of many caught by pier fishers, who sometimes leave hapless marine oddities gasping in the summer sun.

That's kind of what I thought. I'm always astounded by how pier fishermen give absolutely no thought to killing rays or "trash fish" like oyster toads or puffer fish. It's even worse that they just leave them to suffocate out in the sun, like you said, instead of clubbing them or bleeding them out.

I wasn't too worried about the barbs while the pictures were being taken, as there weren't any on it at the time. At the instruction of a veteran pier fisherman who helped me land the ray, I pinned its tail while he cut off the two barbs. I currently have them soaking in bleach to make them white.

Tim, what kinds of flies did you use to catch rays with fly fishing gear? I've heard that they eat crabs and bottom-dwelling crustaceans, and I bet you could come up with some really neat crab imitations to fish with.

I always thought that the eyes were separate from the spiracles, but I'm sure that I didn't improve its vision by holding it like that.
Top

Tim, what kinds of flies did you use to catch rays with fly fishing gear? I've heard that they eat crabs and bottom-dwelling crustaceans, and I bet you could come up with some really neat crab imitations to fish with.


Jake, I snagged them...every last one of them!

I can remember only one ray actually eating a fly. It was an Eagle ray and took a crab fly away from two Permit that were riding it's wings.

Bat rays are commonly targeted by surf fisherman around here. Known as mud marlins and they get big out here-#90 animals on the occasion. Even small ones are a ton of fun. They are strong and can also really dig in and hold bottom. If something takes your rig spools you, and keeps on going, it was likely a bat ray.

You are holding the animal by the spiracles in that picture-these allow the rays to breathe while their mouths are busy in the sand, and that is a good place to get a handhold. These are tough little buggers so I'm sure he did fine after being released. If the hook is too deep in you can always cut the line as close as possible to it and it will rust out.
Top

we fish for rays a lot in the winter time in FL when the fishing is slow. Put a down bucket off the pier with fresh chum and wait. 'tis a frickin dinner bell. We've caught southerns and roughtails up to 300+ lbs
Top

careful holding them by the intake of the gills. could hurt the animal.